Point to Point (one way)

There are currently no female FKTs for 360 Trail - Dunes Wetlands Section.

The full 360 Trail is a 135km loop around ChCh on a mix of urban trails and tracks. If you are nuts you could try the whole lot in one go, but you'll need the best part of 24 hours for that. Instead the 360 Trail concept is an Urban "Great Walk" designed to be ticked off in several discrete stages. Route described here is as per the 360 trail official website.

Start near the roundabout next to the Pages Rd bridge over the Avon River, and head north west along the bank of the Avon. At Wainoni Rd, turn left, cross the bridge, and then follow the bank of the river upstream. Pass under the Anzac Rd bridge using the underpass. Note that this underpass may flood at high tide. Once on the western side of Anzac Drive, use the pedestrian/cycle lane to cross the river using the bridge. Then at the roundabout, turn left and continue west on New Brighton Rd.

Between the New Brighton Rd intersections of Brooker Ave and Dunair Drive is Corsers Stream emerging from what is now the Burwood Red Zone since the 2010/2011 earthquakes. Cross New Brighton Road and head North along the eastern bank of the stream. The path turns east to join Brooker Ave; continue along Brooker Ave until you cross the stream, then go up along the western bank of the stream, adjacent to Donnell Sports Park. The track alongside the stream has suffered in the earthquakes, and reduced ground levels make the ground swampy, so you may need to walk closer to the fields.

At the north end of the Donnell Sports Park, turn left to skirt around the pond. There is a track that carries up alongside the stream, but it is very boggy and a detour around the pond is advisable. Once on the other side of the pond, continue north to Travis Rd. Head west along the track alongside Travis Rd that skirts the wetland, turning north on the Travis Wetland Walkway when the track heads away from the road. When the track forks, take the right option, and eventually you will come upon the Travis Wetland Information Centre at the end of Beach Rd. You can find out more about the wonderful Travis Wetland here. Consider taking the time to do a full loop of the Travis Wetlands Walkway (another short Trail Directory run in its own right).

From the Travis Wetland Information Centre, take the Travis Wetland Walkway north up to where it exits onto and crosses Mairehau Rd. Turn right up Putake Drive. Follow the footpaths along Putake Dr to the end, where it almost meets Landfill Avenue. There are many options for routes through Bottle Lake Forest, both roads and trails. Due to the use of the landfill site for dumping and sorting materials from the earthquake demolitions, there is an exclusion zone within the forest limiting some options. As harvesting and replanting of the forest occurs, tracks are changed. As a result, the Christchurch 360 Trail route through the forest may at times be redefined. You can choose almost any available option you like to make your way to the north-east end of the forest; the nominal route leads east over a man-made hill, and out to a track that runs north through the sand dunes. Go east along the treeline to the end of Apple Road. Go north up Apple Rd a short distance, then east along 25th Avenue along the treeline, as far as Bravo Rd. Turn up Bravo Rd until you get to the Blue Track for walkers, head east from here and continue following the Blue Track.

When you get to Linea Road, turn north and look for the walkway that goes off to the right over the hillock. Stay to the pedestrian trail to avoid conflicts with MTBers. Cross Victor Rd to head straight east to Whiskey Rd. Turn north on Whiskey Rd, and follow it as far as 20th Avenue. Turn right to join the Southern Pegasus Bay Track north. Follow the track north all the way to the surf lifesaving clubrooms, then head west into Spencer Park. Continue through Spencer park, past the camping ground office, and cross Heyders Rd to enter Seafield Park. The sign marking the leg end and the start of the Brooklands Mouth leg is near Adrenaline Forest. Here you'll need a pick up unless you are running back, or in the other direction, or carrying on the next section to Brooklands Lagoon and along the Waimakariri River. 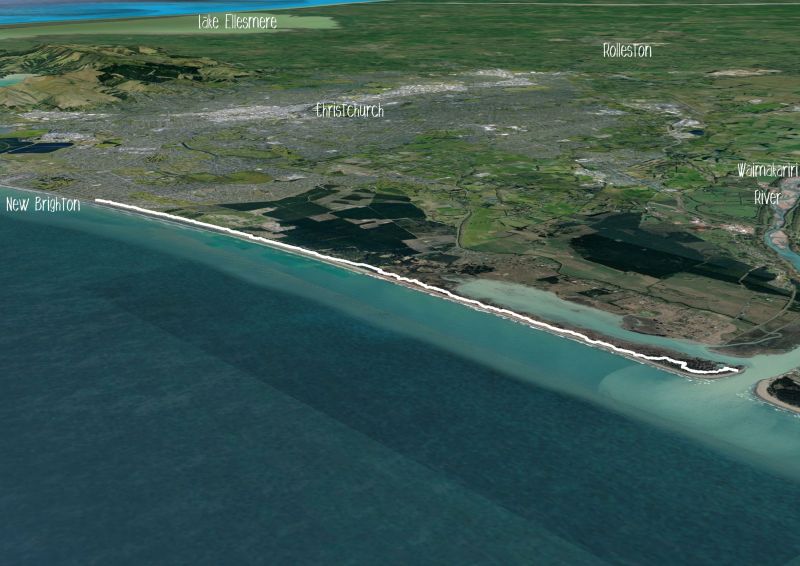