Tracks might occasionally be closed for maintenance or regeneration of bush.

This route is named for the Red Yellow and Blue routes shown on the official map here.

Start from the car park, take the gravelled track following signs to the Troup Picnic Lawn for 300-400m until the hairpin right turn up the Red Track. The next 3km or so are a roller-coaster of steep ascent and descent (lots of steps!), rocky and hidden roots, narrow, and muddy and slippery after rain, with a couple of stream crossings without bridges. There are also low-hanging creepers across the track, just at neck height, so keep your eyes open. Add risk of hearing loss from deafening tui and other birdlife.

Take the Red Track and follow signs to the "Flax Clearing" (note turn off to Chartwell Drive for an alternative start and finish point). Turn right into the clearing but then keep to the left hand edge and exit from the clearing via the Yellow Track. Follow the Yellow Track then turn right onto the Blue Track, and follow signs to the "800 Year Old Rimu". From the rimu continue on the Blue Track eventually looping back to the "Troup Picnic Lawn". There are a couple of exits off the Blue Track up to the Skyline and also into Karori Cemetery from here - take the left hand path each time to stay in the reserve. The back part of this track continues to be steep, muddy, narrow, rocky, and slippery - take care! Then it's down the final flight of steps to the bridge over the stream and eel ponds to the picnic lawn, and from here it becomes a lot easier so speed up for the final sprint back to the car park. 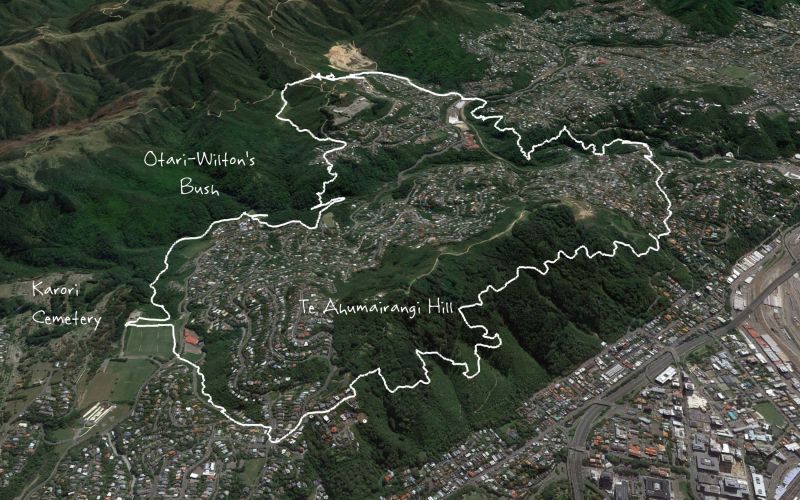