Point to Point (one way)

This spectacular route follows the original/classic (but now defunct) "Avalance Peak Challenge" mountain race. It starts with a grunty 1000+ m ascent of the popular Avalanche Peak then heads along the connecting ridge towards Mt Rolleston before dropping off down a 500 m scree slide into the Crow River, which gives pleasant travel out to the big Waimakariri Valley and back to a bike at Klondyke Corner, for the return to the village. The original race used to also include a 2km warm-up around the village and a long trudge down to the Bealey pub so was a bit longer than the 20km route described here (the winning time for this longer trip was often under 2 hours 30 mins).

First drop a bike somewhere near Klondyke Corner (e.g. up the side road on the Arthur's Pass side of the Waimakariri bridge) and drive to the village. Set off up the Avalanche Peak track which winds up steeply through the forest by Avalanche Creek and its waterfalls (don't expect to run this part!) and then levels out a little higher up, before a final push to the summit (this may take only a little over 1 hour from the start). From the summit you are going to run along the connecting ridge towards Mt Rolleston - you can either approach it directly (take care leaving the summit area) or descend south and pick up a trail that winds around the south side of Avalanche Peak. You then follow faint trails that descend and sidle left-wards toward the connecting ridge which has no poles or markers (except the poles that indicate where to drop off). It is very important that you do not take the first or second scree slide into the Crow (they are badly bluffed) - fortunately large rock arrows have been built on the ground to ensure you continue on towards Mt Rolleston, over a couple of bumps, till you reach two obvious poles and where for the first time you can see a wide expanse of scree that goes all the way to the valley floor. Faint trails guide you down this big slide which is of variable quality (take care in the thin section half-way down). At the bottom cross to the true right of the valley which leads down valley (with a shortcut to the true left before returning to the true right) until Crow Hut is reached, which is a nice place for a stop. From there the trail stays on the true right of, and always near the Crow river; it's a little slow in places but pleasant running in the sections of bush, and becomes easier further down valley. A prominent marker indicates where you cross to the true left of the Crow River - follow markers which eventually lead you through bush and onto spacious and cruisey alpine pastures that follow down the left side of the Waimakariri River. Eventually you'll need to leave this blissful grassy travel and start running on more demanding river stones with occasional crossings of the braided main river, just head for Klondyke Corner, picking up more runnable lines where you can, most likely taking you past the toe of Turkey Flat and out to the start of the side road where your bike is waiting. 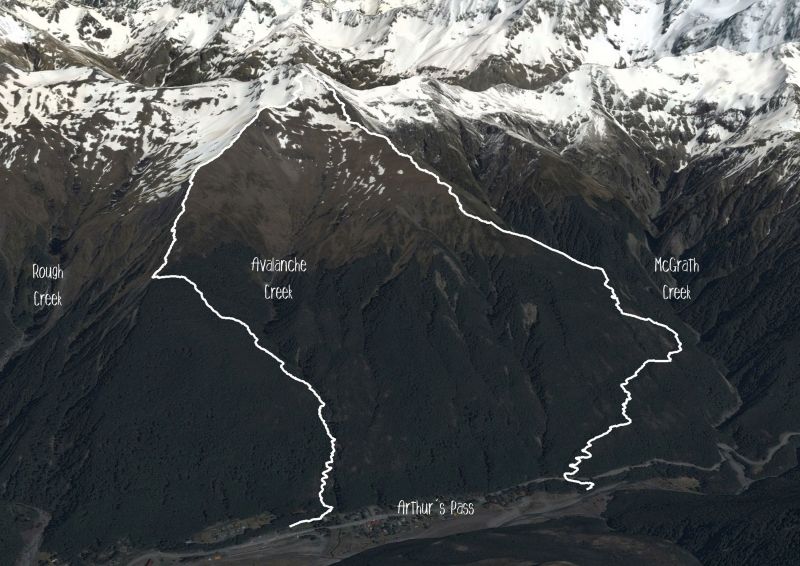