Note: The Pylon Track is not marked on the Information Board in the car park, nor is it on NZ Topo map. It is described on the DoC site. It was built in 2015 to replace the Kauri Loop Tracks which have been closed to protect the Kauri.

From the Wairongomai car park take the Low Level Loop Track. About 200 metres in there is a signpost directing you down to the right to the Pylon Track. Very quickly you arrive at the river. It is easy enough to boulder hop and keep dry feet on a good day but after heavy rain it may be impassable.

The path continues up through the forest on the other side. You climb steadily and at times steeply through varied vegetation. The path is reasonably clear and well-marked but keep an eye out for the markers. As you climb there are a few ‘vegetation windows’ that give you splendid views of the Waikato Plain and Te Aroha. The path essentially follows a ridgeline and the last 200m of climbing is quite steep. Unbelievably, it used to be a pack pony route! There are still a few remains of the steel power pylons which were used for the power line linking the Horahora hydro-electric power station with the goldmines.

At about 4km in (and roughly 600m ascent), you reach the bushline and emerge into the open to an amazing view of the Waikato in front and the Kaimais stretching out to the left. The climb is definitely worth it! It is quite exposed so probably not a great trail to do on a cold, windy day. Continue climbing for a few more metres over scrambly terrain to a rocky outcrop. This is known as Pylon Peak (not named on topo map)

There is an old sign and a path leading off to the right - ignore this and carry on to the left towards Te Aroha. This is the Old North-South Route and it is pretty slow going to the junction. Keep an eye on the markers, the path is mostly obvious just not very well used, so overgrown. The path follows the contours along the ridge so it is pretty flat. It may be muddy after rain. After 2kms or so you arrive at a T-Junction, head left towards Te Aroha Mountain.

The track is now much more runnable. Pukekōhatu is to the right off the track as you run but there isn't a path leading to it. Pylon Peak is a much better vantage point for photos! It doesn’t take long to get down to Wairongomai Saddle. To the right is the track Te Aroha if you want a longer day. Turn left to head down to Wairongomai Road. This is the main Wairongomai Valley and you will start to see signs of the old rail tracks.

A phone torch is sufficient to light the way through a short tunnel and then pick whichever route you like to get back to the car park. This route goes down the side of the May Queen Incline, past the top of Butler’s Incline onto the High Level Pack Track and then on the Cadman Track and straight down to the car park.

The Waiorongomai valley was the site of a gold rush in the early 1880s. This tramway, with three self-acting inclines (where the loaded wagons going down pull the empty wagons up), was built by Piako County Council to give access to the mines. The remains are preserved and it is New Zealand’s oldest railway with rails still in place. The Rata trees on the way up the Pylon track are impressive and the subject of monitoring. There are still a few remains of the steel power pylons which were used for the power line linking the Horahora hydro-electric power station with the Waihi gold mine and Victoria Battery in the Karangahake Gorge. https://motowalknz.com/2016/09/01/waiorongomai-pylon-peak-track/ 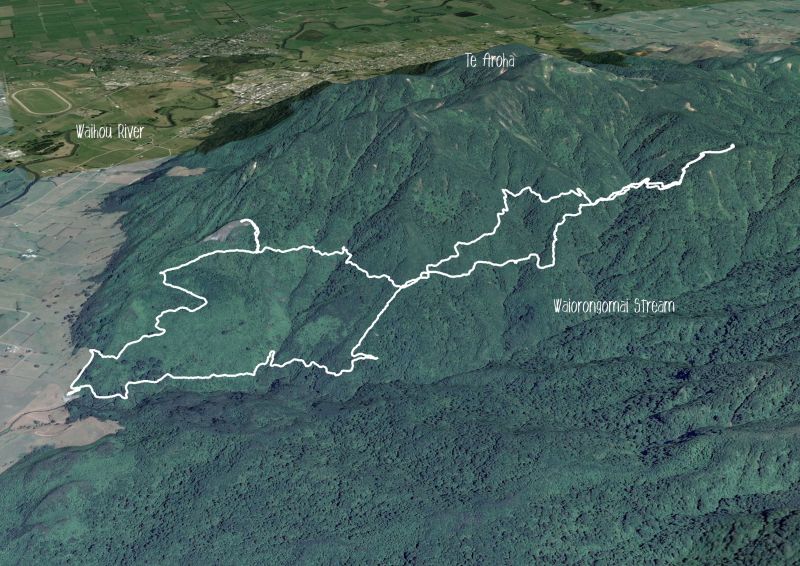