While readily accessible from Whakapapa, the route goes off designated trails into back country and along some tough hilly terrain so it may not be appropriate in winter and adverse conditions.

There are currently no female FKTs for Tama Traverse.

The start of the route is simple to navigate as you follow the track out from Whakapapa following signs for Tama Lakes and the the trail up the early ridgeline above Lower Tama Lake. This is all poled with trail markers.

Reaching a small summit at the end of the Tama Lakes track and the end of trail markers, there are still some tracks ahead formed by people passing. On the left there is one gentle ridgeline running away towards Ngauruhoe but your route lies directly in front of you and here the trail starts to get more challenging.

You'll proceed down from the summit entering into rocks and down to one small saddle before up and then down again, then another bigger climb to the unnamed 1450m peak shown on the NZ Topo Map.

Then from The Siddle you angle right towards the southeast to drop slightly to a small saddle and approach the now obvious Tama summit. From Tama angle away left and pick a way down the jumble of rocks below you and in the direction of a long ridgeline running off into the distance on a southwest line.

Pick your way along the ridgeline. This is jumbled with rocks at times but reasonably straightforward running and easy navigation keeping near the top and generally just to the right of the ridgeline. You may frequently be able to make out the footprints of hikers that have come this way. Eventually, you'll find yourself dropping down into the forest and a sea of orange markers as you join the Northern Circuit trail, follow this to the right and down the hill in the direction of Waihohonu Hut.

Here, either at the hut or the stream just before it is your only opportunity on this route to replenish water supplies. From the hut follow the track back in the direction of Whakapapa for about 7km.

The route then leaves the trail and strikes out across tussock back towards the Tama Lakes ridgelines. This point is directly after climbing a straight rutted section of the track then coming onto a plain, and if you're looking for it to the right you'll see the vestiges of a trail branching off into the tussock. This disappears very quickly though and you will be picking your own way across the tussock in the direction of the ridgeline in front of you. (Anyone doing this in the opposite direction would be coming off the ridgeline roughly in the direction of The Pinnacles on Ruapehu).

The long climb up the ridgeline will eventually bring you back to the subsidiary summit where you dropped down to cross below Upper Tama Lake and from here you can retrace your steps back to the Tama Lakes Track. From there it is a simple return to Whakapapa Village.

The route takes you around Tama Lakes and up close to the southern and eastern flanks of Ngauruhoe, with Ruapehu in the distance, and on a clear day to views of the Kaimanawa ranges standing out in the distance when you summit Tama. As you proceed down the long ridge from Tama the silence is broken when you pass Waihohonu Springs and hear the stream babbling along in the valley a hundred meters below you. 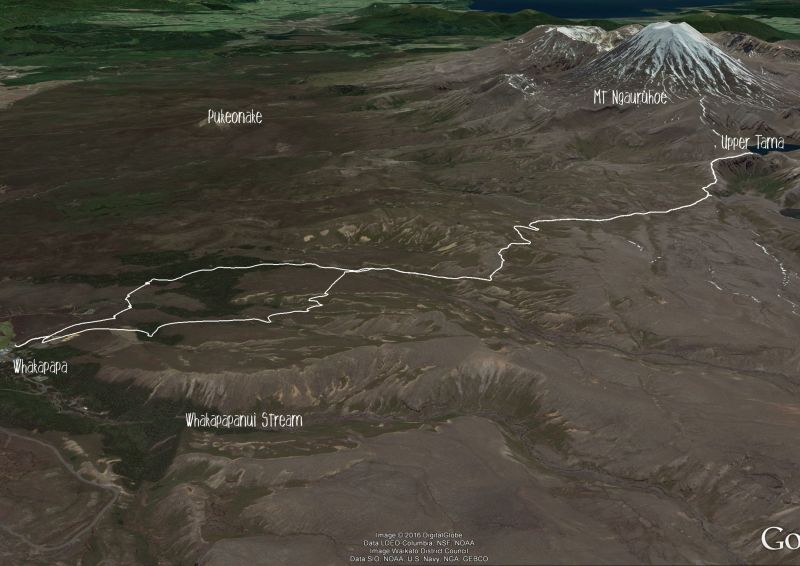