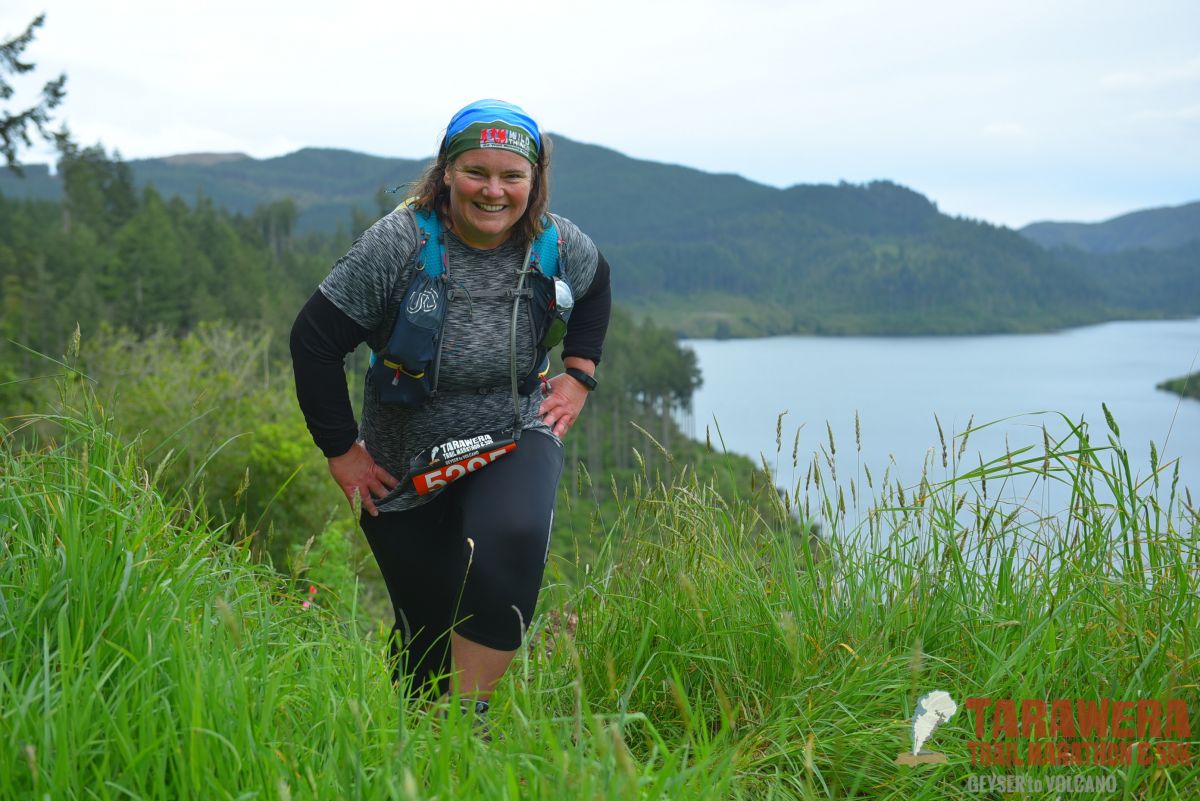 You don’t have to be a super regular on the Wild Things Facebook group to have engaged in conversation with the ever-helpful Cate Shave.

The Wellington-based Wild Thing is what we call a proper Good Sort - always there with a word or ten or advice and encouragement for whoever needs it.

Cate Shave is proof that it is never too late for a new beginning. Her running journey began four years ago, aged 46.

“I was struggling big time with depression, had been for a few years,” she recalls. “I was seeing some improvements with medication but knew my GP was also going to say ‘And what else are you doing to look after yourself?’”.

Cate had done some running events in the past but nothing that had sparked her interest in taking it up long-term. However, she knew exercise and time outdoors were the perfect component to her treatment.

Struggling with motivation to maintain regular exercise, she joined a team for the Oxfam Trailwalker challenge.

“I figured that being part of a team and doing something as a fundraiser would help keep me accountable so I took the plunge and entered for the 50km about 6 months out, hoping that I’d be able to find some teammates who would join me somehow" 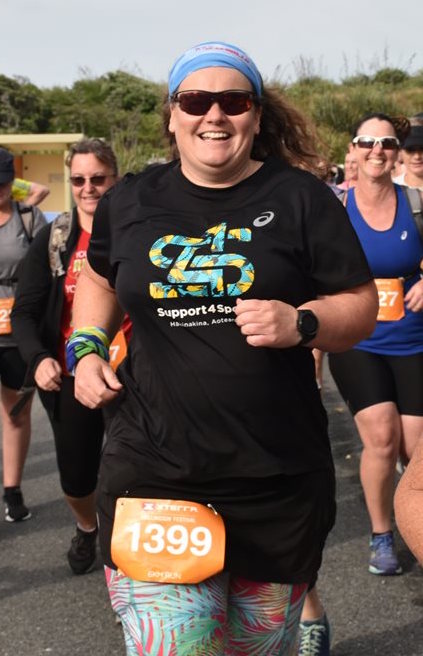 Cate at the Xterra Festival on the Kapiti Coast this year. Photo credit: XTERRA Wellington Trail Run and Walk series

“Thankfully three other women stepped up to fill those spots and we started training for it. I was soooo unfit that a 1.5km walk down to our local beach was a struggle, but you got to start somewhere right?”

To train for that Oxfam event, Cate ended up signing up for other events, like the half marathon and the Round the Bays in Wellington. From there, she met a few runners that encouraged her to discover the joys of Parkrun in Lower Hutt.

“I met more runners through that same group, one of whom was Jason Reid who was just starting a charity called Running on the Spectrum, which aimed to get Kiwi kids with autism into running. I signed up to do the charity’s first virtual run (a fundraiser) – the Greatest Virtual Run or GVR as it became known – in April 2017, to keep myself moving between the Oxfam challenge (which our team successfully completed in March, proudly taking the trophy for ‘Most Steadfast Team’ that year, ie. the team that came last but still finished with all their members) and the Wellington marathon which I intended to do in June with some mates from Parkrun (me as a walker, them running).”

The Greatest Virtual Run ended up being more than just “an amazing experience” - it cemented trail running as part of Cate’s lifestyle and a big contributor to her ongoing wellbeing.

She ended up stepping into a volunteer admin role within the GVR Facebook group and has continued to enjoy the support of runners and walkers she’s met through there.

“Later in 2017 Jason told me I should consider having another crack at the 50km distance. I needed a goal to work towards so decided, why not?”

With that in mind, Cate signed up for the 50k at Tarawera, despite “knowing next to nothing about it, and not having even managed to run the whole 5km of a Parkrun without stopping”.

“But the attitude is that you never know what’s possible unless you take the chance. By this stage I was regularly doing 80-100km weeks training, still a mixture of walking and running, and it was making a huge difference to my experience with depression,” she recalls.

“Time outside, in nature, mostly on my own but that was my preference, I was fitter and stronger, and was connecting with a community that was amazingly welcoming and encouraging – my physical and mental health were both 1000% and I had the running community to thank for it.”

On that day, Cate covered her 50k on foot and had “the best day out”, even with the hypothermia she got after finishing. 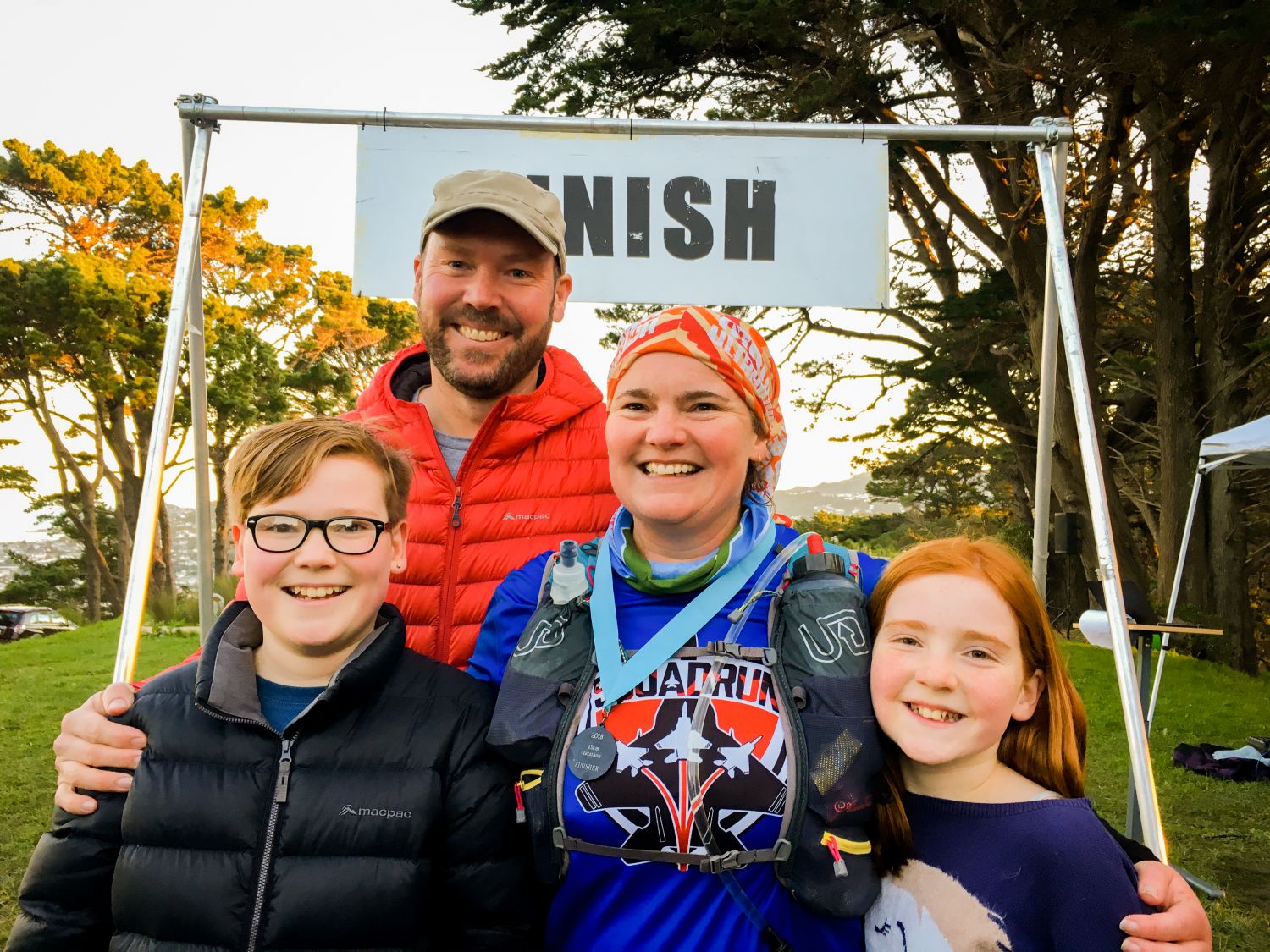 At the finish line of the WUU2K. Photo credit: Bern Stock/WUU2K

Since then, she’s completed a few more events, including WUU2K, North Range Trio Catchment Ultra and Taupō 74km. She’s even earned her first few DNFs - proper rites of passage for any trail runner - at Ring of Fire and Tarawera 102km.

But if her list of trails that she’s ticked off is long, the Wishlist is even longer.

Cate’s been busy exploring trails using the Wild Things Trail Directory and says she’s got so many on the horizon, it’s hard to pick a favourite.

“I do love the Polhill to Turbine Loop – an urban fringe trail in Wellington – being able to see kaka, tiekē and ruru on beautiful trails just a stone’s throw from the CBD, will always be one of my favourites. And there is something pretty special about the WUU2K course – running around your entire city on hilly trails is awesome!”

Each trail brings new, special memories and her happiness bank is continuously refuelled by these. One of the most treasured ones is from last year, when her husband Mike and her met up with another good friend and fellow Wild Thing, Penny Oxley, from Auckland, to go do the Timber Trail, over two days in the Pureora Forest.

They say it’s not the journey but the destination. In this case, it was about both as the journey ended up being quite eventful too.

“It started when our lift to the start of the trail broke down (in literally the middle of nowhere!!) and us having to hitchhike the rest of the way and ending up all lying on a mattress in the back of a local guy’s station wagon. It really set the scene for us to have a great couple of days together having an adventure – away from our families and jobs, and indulging in our shared love of being somewhere wild,” she recalls.

Cate loves getting out on the trails pre-dawn and having the wilderness to herself in the dark, before everyone else wakes.

“Hitting the top of a hill somewhere in time to watch the sunrise before the rest of the world wakes up fills my soul,” she says - a feeling many Wild Things can relate to. 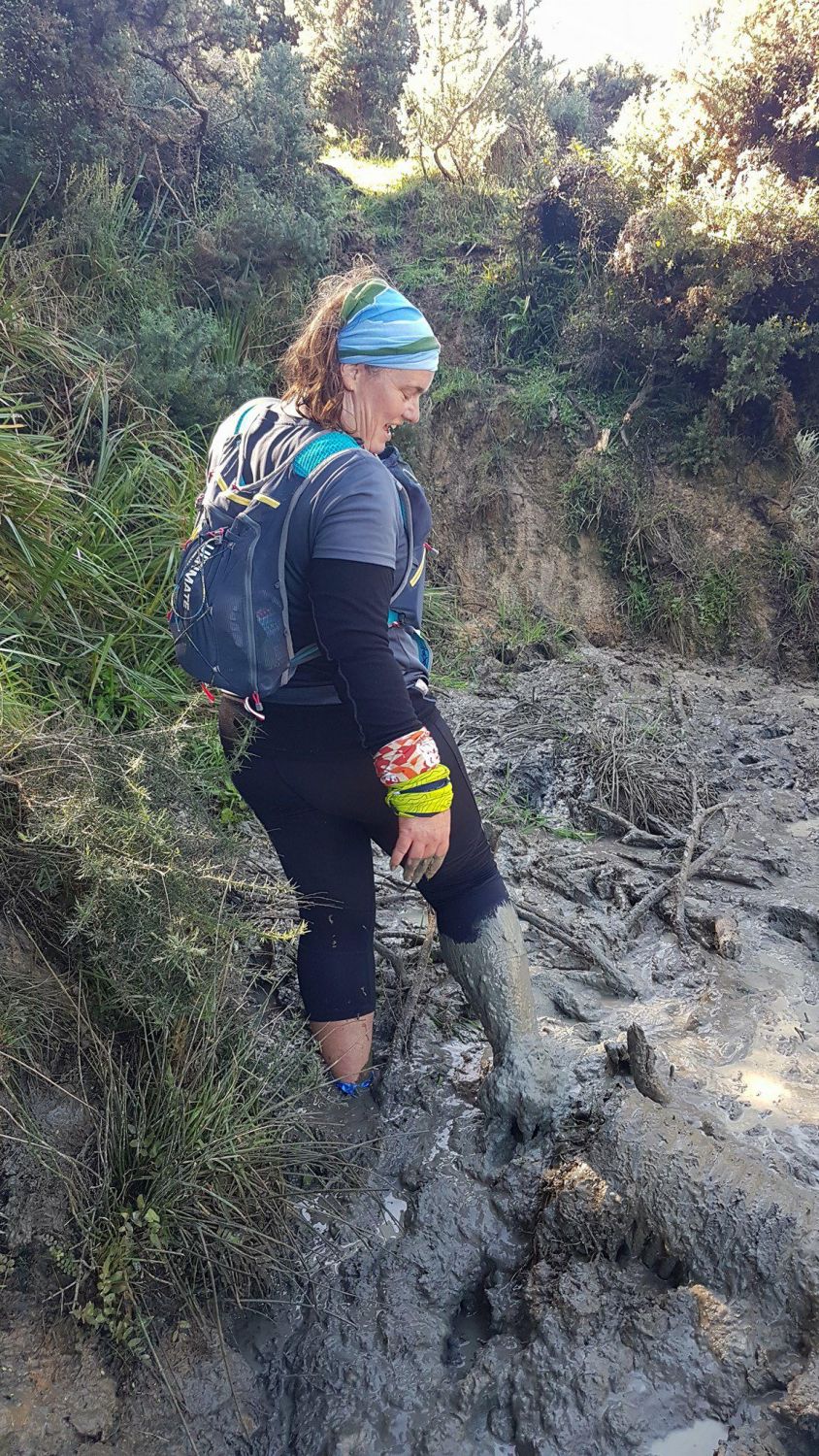 Cate runs her own consultancy business, specialised in workplace and adult learning. She enjoys the variety of her job but also the fact that, being her own boss, she gets to set her own hours and sometimes gets to schedule in a chunk of trail time when most people are in the office.

Passionate about getting other people enjoying the outdoors, Cate says her biggest running achievements to date don’t involve her crossing finish lines or receiving medals. She’s loved her three years organising crazy online running challenges for Running on the Spectrum and the GVR team, including two Beer + Pie Hill Climb challenges on some of her local Wellington hills.

“I love combining running with fundraising and volunteering – I am currently working with a mate on a special virtual run as a fundraiser for the SPCA that will be run in July, which will even have its own locally-handcrafted ceramic medal,” she says. 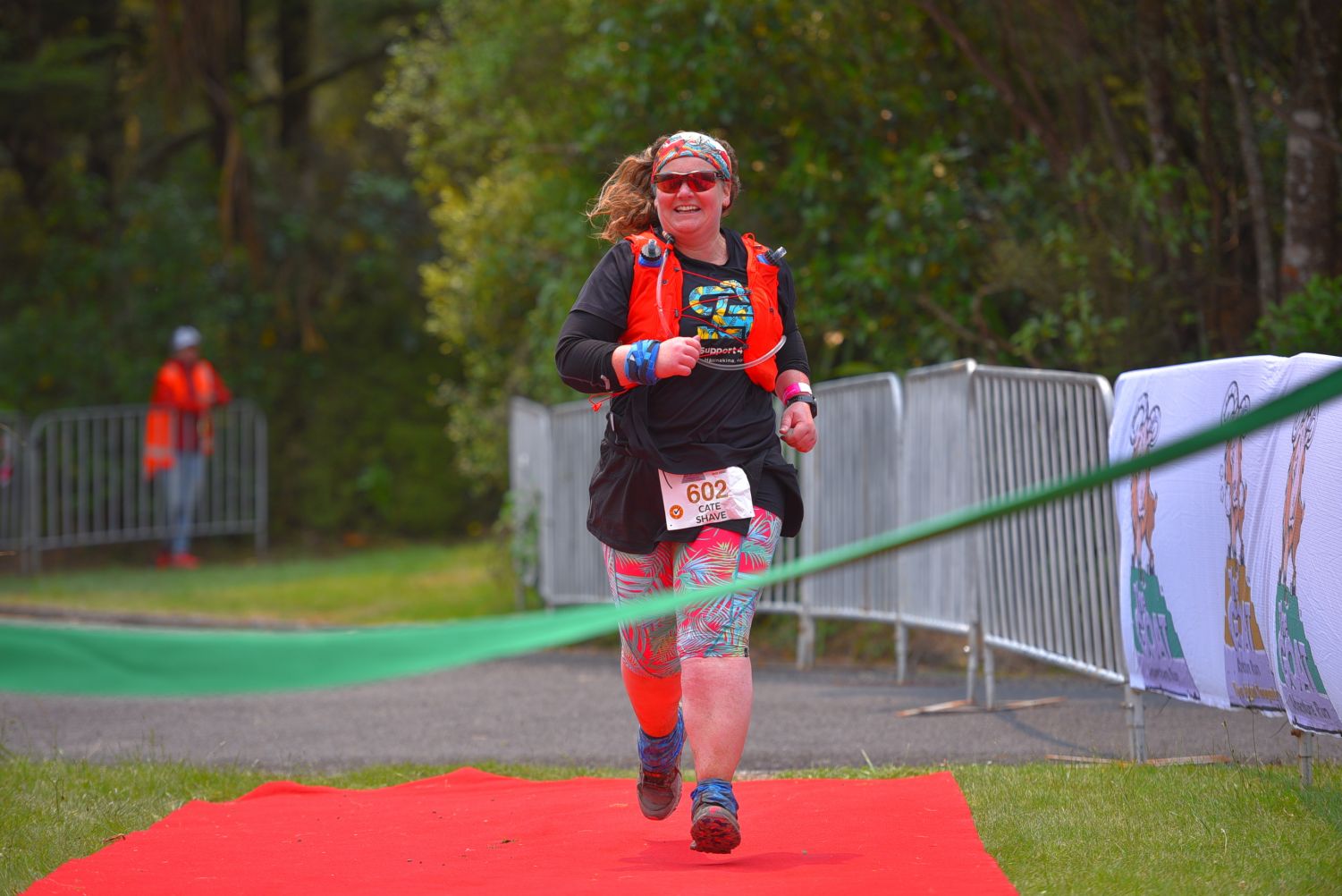 All smiles crossing the finish line at The Goat. Photo credit: Photos4Sale

The events are great motivation to keep her going, but they’re not the only one: “The two biggest motivations are my own mental health and being a good role model for my daughters – showing them that you don’t have to be any particular shape or have any special athletic talent to get out there and have a go.”

She’s got many goals on the horizon, including having another go at the Tarawera 102km and one day conquering the Old Ghost Ultra.

The runner who laced up her shoes for her mental health now finds a million reasons to keep on moving — and she won’t stop any time soon.

“I’m turning 50 this year and hoping to be enjoying the trails for many years to come yet!”