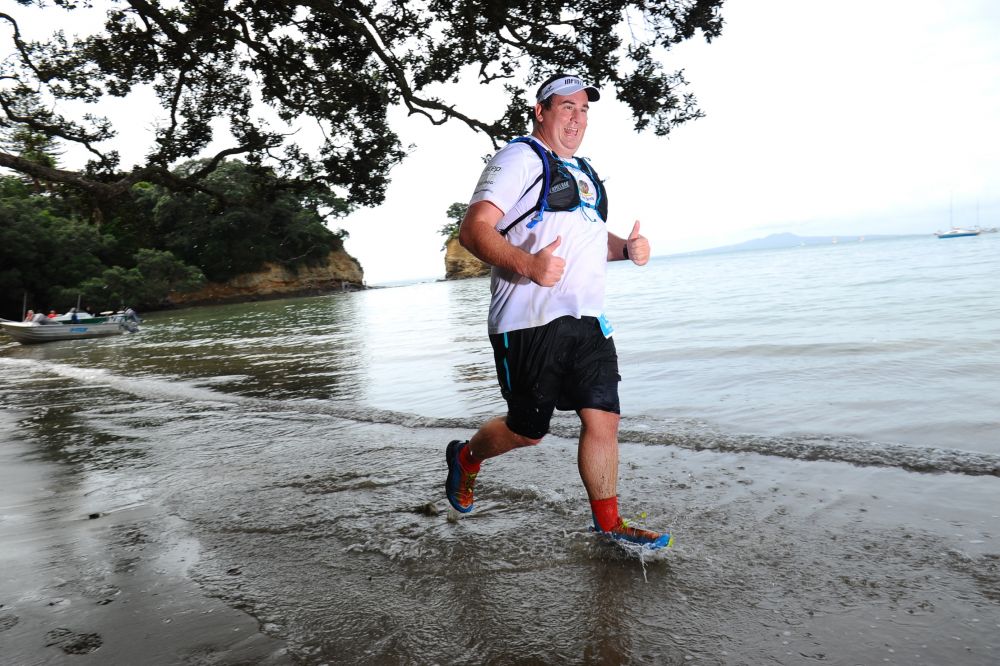 In my happy place. Photo by Photos4Sale

It's funny how you can grow up in an area and never really see it all, and this was certainly the case for Total Sport's Coastal Challenge. Many summer days were spent at the beaches along the North Shore of Auckland, however running between them was just not something we did. So it was high time I changed that.

While I'd initially signed up for the 33km Full Monty, the prospect of back to back 30+km weekend was a bit daunting/ambitious, so I pegged it back to "just" the 22km Mid Monty. Waking in the morning to a slightly overcast day I was stoked, as I wasn't looking forward to the prospect of full sun with no shade. But the sun doth overcome and there was still sunburn to be had, along with humidity plus plus.

The tides meant an almost civil 11am start, and the opportunity to see the front runners of the Full Monty come through before our gun. The start was a quick sprint as most tried to get up and over the first rock outcrop before a queue formed. Thankfully it didn't take too long to get past here, and on round to the next hold-up at another outcrop climb.

Now here is my take on that bit: Help each other! I watched as person after person tried to drag themselves up the rope and while the next in line just stood there. If everyone had given the person in front a leg up, and the last person up reached back a hand, everyone would have got through there in half the time. However knowing my limits and thus the slim chance of dragging my arse up on my own, I chose to swim around and try my luck at catching a wave back in (plus get a sneaky bit of swimrun training in).

This was pretty much the last bottleneck (for me anyway) and it was smooth running from then on - well more like running, wading, a bit more swimming - and somewhat surprisingly a lot of little bits of climbing. Yep, despite pretty much being at sea level the whole time there was plenty of scrambling over things to rack up about 400m of gain. Not to mention having to lift the feet over all the smaller rocks or running in soft sand, both which help zap the legs that little bit more. 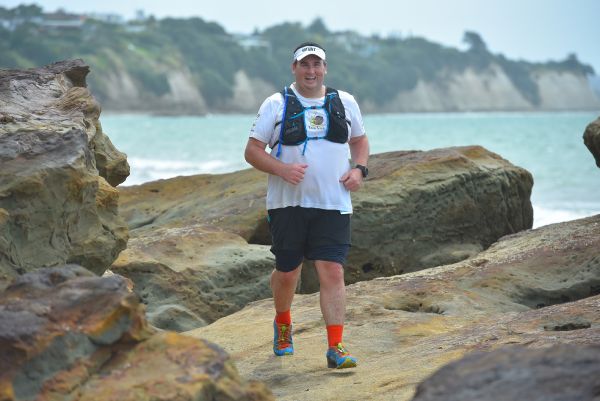 Going into the event you are warned of three thing:

Having already covered number 1, I'll move onto number 2. Right off the bat I knew I'd be laughing with my Icebug Animas on the wet surfaces. I was rewarded by managing to stay upright (on land) the whole time, with the rock plate working overtime to protect my feet from all the jagged bits. In the surf however I was a little less graceful. I managed to stumble or be pushed by waves into submerged rocks a few times. And in one barnacle/oyster covered case, the requisite blood was let, but with just one knee, one hand and shin I got of pretty lightly. (It ain't trail running if you ain't bleeding at some point).

So you might have thought the title of this recap "New and interesting places" was referring to running along the coast but you'd be wrong. It better refers to warning number 3: Anything anti-chafing is your bestest friend. I certainly thought I'd heeded this warning, applying an overly generous coating of Trislide to the 'usual' places. But soaked with salt water and the humidity preventing any chance of drying out, I was treated to chafing in new and interesting places.

Who knew that you could get chafing behind your knees? Or biceps? Or muffin top? Well I'm letting you know now that you can. Thankfully I'd decided to take my can of Trislide with me, so mostly kept on top of it. Though I'm sure I must have looked like I was running down the beach applying deodorant in some odd attempt at vanity. What I did forget though was extra sunscreen - pro tip: don't forget the sunscreen.

Feeling surprisingly good, I eventually rolled on into the finish line and right to the beer tent (I'd run out of water, honest). I'd taken a bit longer than I thought I would, but I'd thoroughly enjoyed myself out on a deceptively challenging course (I guess the event name kind hints at that though). Overall it was another of the slick Total Sport gigs I've come to expect. Thanks to Wild Things and Total Sport for the entry discount, you forced my hand to enter this time and I'll be back.

This blog was originally published on Brent's own site, The Kiwi Trail Snail. Read more of his trail musings here.