Razorback Ridge - a highlight of this stunning course. Photo by photos4sale

Goal setting
With a solid 6 week build up after sporadic holiday running, I had put myself in a good space for this event. I was eyeing a sub 6 hour run for the full marathon, but had never been too sure about how realistic that was. I was conflicted between the small number of finishers under 6 hours in the last few years (maybe it was asking too much?) and my good feeling when comparing the course to that of the Oxford Odyssey MM last May, where I had a great day and finished in 7:18. Also, I was feeling that I could be in better shape now, so maybe it was ambitious, but just right? Dream big! Luckily I found one of back-to-back Hardrocker Grant Guise’s slower SMMM efforts on Strava where he had run a 6:03 and this provided some good info on possible splits!

Race day
Waking up to turn off your alarm at 5AM after ‘not enough’ sleep in a bed away from home, it must have been race day! The bumpy, cliff-laden ride in the van out to Skippers Canyon was a bit of fun to wake you up before the race. We arrived to the drop off point and I took a moment to enjoy the view and let it sink in that I was finally here. Then I turned around and the queue for the loos was suddenly massive. Better get in line and hope for a good turnover rate. I think this was not the only time I have been in a queue for the loos before a race and initially felt rather stressed at the possibility of not getting the job done before the race briefing started, only to find myself emptied and hanging around the start line with some 15 minutes to spare. It was classic pre-event nerves and time dilation.

I saw that the first section of the course was steep and narrow for the size of the field. It was obviously going to be an immediate bottleneck. I usually like to start further back and more relaxed, but I have found that with steep sections where almost everyone will be walking anyway, and forming a long chain moving at the same pace, you might as well be at the front of the chain rather than at the back! So I lined up near the front. 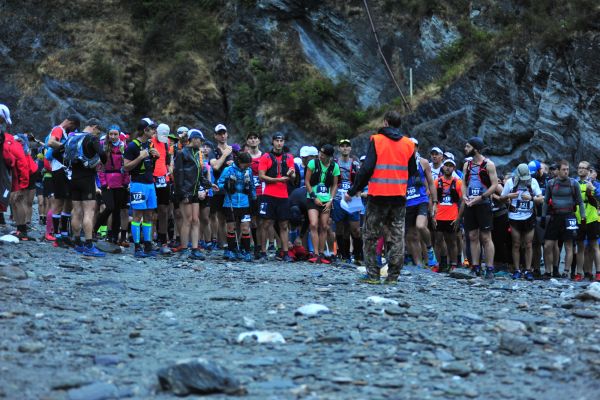 After an initial climb we were soon onto the narrow stuff that I had enjoyed watching in a video from previous years and been warned about by the RD at the race briefing. It was great fun! The care required with your footing here meant that I wasn’t looking around quite as much as I’d have liked. Running on raised open sections with views is really the best!

Some rain began not long after the start and was rather persistent. I got soaked, but it helped with cooling and in the end the day warmed up just enough after the first couple of hours. No clothing changes or up/down layering required. It was a pretty serious climb heading up to the high point of the course, but after passing that point I was pretty happy, and seemingly on good time. The steep stuff coming down Death Ridge kept me on my toes. Luckily I was with another runner at the time who was pacing it nicely.

The scree and the ladder were good interesting obstacles. I think I nailed the scree run. It’s fun when the gravel is a bit deeper and you can just dig in your heels and get some real pace. This was mostly the case for the short scree run at SMMM. The ladder and many small stream crossings just after were great too. It felt quite exciting like wandering up into a jungle. Here’s a great video of original Wild Thing Malcolm Law having fun on the scree! (Video credit: Majell Backhausen)

My thinking was that I would need to get away from the lodge CP near halfway by 3:15 to have a shot at a sub 6. As I saw it in the distance I got a real boost as I was looking good to get there around 3 flat. I arrived at 3:01 in the end and I was stoked. Nine or ten minutes flew by here while I got some electrolyte drink, refilled my water reservoir, chowed down on a banana and investigated the fancy sporty jelly beans I had never seen before. I had coped alright with a bit of debris in my shoes and socks after the scree run, but I decided to empty them out in the interest of comfort for the second half of the long day ahead. Unfortunately this seemed to take ages! The socks clung (as they do when wet), the insoles were a pain to put back in, and the dexterity in my fingers wasn’t too flash. With that job finally all done, I got out my big green $7 Kmart hat and took off again. It was perhaps more time spent there than I wanted, but I pretty much needed it after spending some energy pushing to get there at 3 flat and coming up just short. The lovely lady who had been setting a great pace down Death Ridge passed me here, while I was playing with my socks, and I never saw her again. Kudos on a well-paced run!

Not far after the lodge came a turn off for the marathoners to head up another ridge. Around here there was plenty of walking from me, and even on some pretty gentle grades. Sometimes you just need the break! I had seen an interview with a previous year’s runner up talking about how he had “walked all of the uphills”. This was a great thing to hear not long before the race to get a realistic view of good race strategy. This guy was 2nd place in 2013 (NB. slightly different course) so he obviously knew what he was talking about! I think that despite hearing this many times, it takes some experience to really appreciate it and not just feel weak at the time!

Ridge running can really be the best part of a trail! I had a great experience in the Tararuas with my family over the holidays walking for some hours along ridges and I just find that the views and feeling you get doing that is like nothing else! There was a lot of narrow and not quite formed ‘single track’ on this part of the run, the sort of stuff that it’s easy to get ‘trapped’ in and trip up. It was fun and challenging, but required a lot of focus really. Here are a couple of videos of SMMM champions Ryan and Lucy crushing the course around this point! (Video credit: Phillip Miller)

The steep descent down to the river to merge courses with the other events was pretty punishing. Steep downhills are not the most comfortable or enjoyable parts of a run for me, but I hadn’t avoided downhills in my training so it was all good. The last big climb up to Sefferstown Hill CP was damn steep! The track was much busier here, but there wasn’t much chat as everyone was focused on powering up the climb. I was lucky at the aid station and took up a kind offer of some electrolyte powder from a friendly stranger. You really do get some good sorts at these trail running events!

OK, I was getting close now! I decided I had plenty of time based on Grant’s splits for his 6:03. It wasn’t such smooth sailing though in reality. About 6 kms from the finish I had the lovely surprise of seeing my good friends and local endurance legends Felicity Thomas and Weston Hill! I snagged a high five as I ‘flew’ past them and their encouragement was a real lift! I was really happy to get that support at what was a critical time. They were letting runners know it was about 6 kms to go, but following professor Suunto’s guidance I thought I only had 4 more kilometres to navigate!

OK, I had time and the pace would need to be a bit better on average, but nothing heroic was required. I had already done the hard work really, but it was still a bit un-nerving. Settling back into my work, the pace was going fine and I was feeling good. Then the recurring river crossings struck! I had failed to learn about these before the event! (Lucky my current occupation doesn’t revolve around research…) These crossings had the effect of sporadically disrupting my rhythm, making my legs a bit heavier, and making it hard to keep a good pace. I was too close to a serious achievement here to not make it, so I pushed on despite some serious drops in energy. The last of those fancy jelly beans were soon gone. After the river crossings finally ended I was keeping an eye out to view the finish. After the surprise of how far there actually was to go earlier, I wasn’t counting my chickens on this sub 6.

I saw a building in the distance and thought that must be the finish. OK, that was close enough to comfortably make it. Then I saw people running around to the right away from the building and continuing. OK, it must go over there and through that gate and back to the building. That was close enough to make it. Then it turned out people were continuing around to the right and I couldn’t see anything for a while. Nothing seemed certain! Maybe I heard enough noise for it to be the finish close by. OK, I’ve got this. I just couldn’t quite see the actual bloody finish until I was very close! Finally, this was it. I crossed the line at 5:57 and change! I had crushed it and achieved my goal! Staying focused had been crucial, but I had the sub 6! Super stoked! Check out the full results here. One cheeky chap at the finish line!

I really love a quote I heard recently on the trailer for Kilian Jornet’s upcoming film ‘Path to Everest’: "A project ends well when it makes you dream even more"

After a week off I was watching running videos and getting super jealous again. It wasn’t long before another project popped up and I was dreaming of setting another ambitious goal. Surf 2 Firth was calling (largely due to a discount courtesy of Wild Things – it pays to be VIP!), time goal TBD