There are currently no male FKTs for Broken Hills Historic Mine Tour.

This trail takes you for a tour of the historic Broken Hills Mining Area.

From the carpark head south through the Kauri Protection Wash Station. Follow the wide singletrack beside the river. Continue straight at the first junction to stay parallel with the river. At the next junction continue straight, along the river. The trail narrows from here but is still lovely. It will turn right and the grunty climb starts.

Using a combination of stairs and steep track you climb nearly 100 vertical meters to a track junction. The route heads right down the hill but for a bonus side trip head left up to the Collins Drive which is a 500m horizontal mineshaft. Go about 50 meters to where a closed off side mine shaft is and turn off your torch for beautiful glowworms.

Continue down the hill on Water Race Track, making sure to take note of the views of the river below, the cliffs opposite and down the valley. You will descend down several sets of stairs and some flatter sections. Keep an eye out for the turn into the water race tunnels which is a hard right at the bottom of a steep section of stairs. If you hit the river you missed the turn and need to head back up.

You are now following the old water race which takes you through several short tunnels. At the next junction turn right dropping steeply. Once back on the flat turn left to head back to the carpark.

Go to the end of the carpark and take the small track with a sign for toilets. Pass the toilet and go across a grassy area to the campground information board. Continue past the info board on a gravel road and follow the road as it turns right and goes through a gate. At the bottom follow the road left and along a grass area. At the end of this grass area take the track through the bush, coming out at the bridge.

Cross the bridge and turn right following the signs for the Golden Hills Battery. This will climb up a gravel road for 250m. You will pass a junction signposted to Broken Hills Battery but ignore this for now. The gravel road becomes singletrack and you follow this beautiful wide singletrack to the ruins of the Golden Hill Battery. Make sure you explore the ruins down by the river.

Follow the trail up the left side of a small stream. When you get to the next bridge look to your right for a mine shaft. Continue on the trail around to this mine shaft. Get your torch out and walk to the end. Note it has a 90 degree turn to the left. On your way back out look up. A combination of the type of rock and the tiny water droplets make the whole tunnel roof sparkle.

Back onto daylight turn left descending beside the stream and continue straight to the road.

Turn left and follow the road. Cross the bridge and retrace your route through the campground back to the carpark.

Puketui town was established around minong and by 1912 a settlement of 200 people had sprung up along the river. Plans were prepared for a permanent township on the site now occupied by the Broken Hills Campsite.Just two years later, production at the mines tailed off and the size of the settlement diminished accordingly. Small-scale mining continued in the area until 1923. The Water Race follows the old water race that took water from the Third Branch Stream across the Tairua River via three tunnels to drive the Broken Hills Battery. The original race was 3300 m long.  The Golden Hills mines started large scale production in 1908. By 1910 a stamper battery had been built across the river from the mine, but production lasted only 3 years. The battery used an expensive but unreliable coke-powered suction gas engine that was too large for the size of the reef being worked.At the battery site look for the original concrete foundations and arches that once supported large cyanide On your way to the Golden Hills Battery you will see two mine tunnels (adits) on your left, one of which is still being worked today. At the battery site look for the original concrete foundations and arches that once supported large cyanide vats. Broken Hills mine, which operated successfully from 1896 to 1914. A water-powered stamper battery began crushing ore in 1899. It produced 51,000 ounces of gold, worth (at 2011 bullion prices) around NZ$100 million! Sixty people were employed at peak production. The rusting ironmongery seen on the path was once the blacksmith’s shop. Gem of the Boom was the site of an old mining settlement, and relics of the past can still be seen, including what appears to be a jail cut into solid rock. 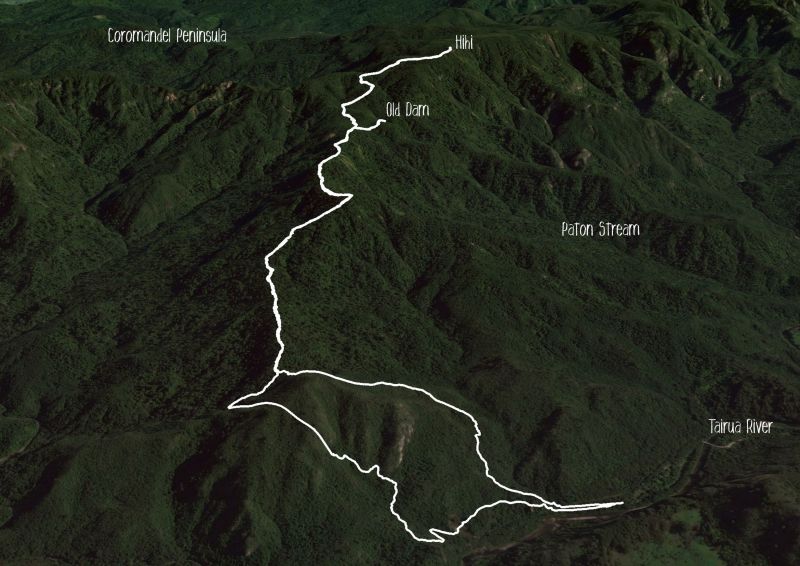