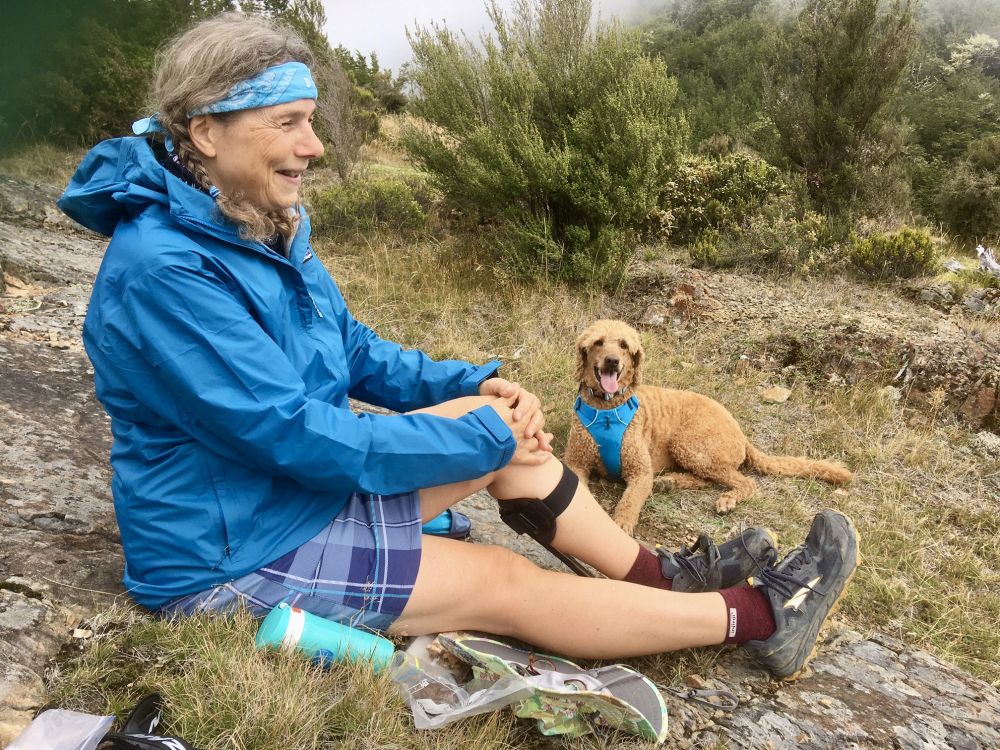 When people see me out and about on the trails with my leg brace they often wonder what it is and why I have to wear it. And also how come I can run with it?! I don't mind questions at all and have had many conversations on the hill about my brace. But I thought you might like to learn about trail running as a physically challenged athlete. 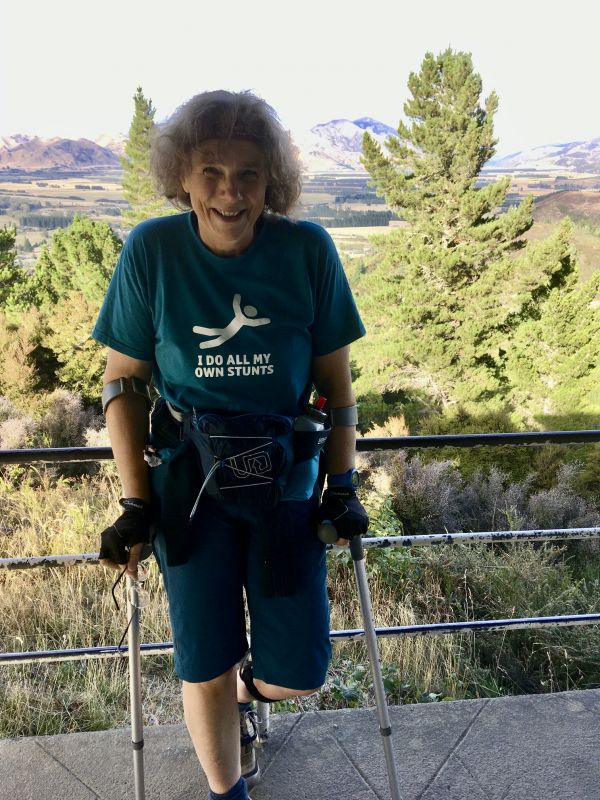 I have foot drop on my left side. What this means is that my foot can press down, but the muscles/tendons required to pull it back up again don't work, so it hangs down and trips me up. Putting my socks on can be a challenge too as in addition to the foot lifting problems I have weakness in my left leg, and some numbness and pain in my left foot. After being on my feet for over 5 hours, the pain can be considerable. All this can make running quite a challenge.

I got foot drop after a spinal injury, and I got the spinal injury taking part in a wheelbarrow race. We made a spurt for the finishing line and the resulting crash is what did the damage. I would like to point out, however, that we did win. In fact the first question the surgeon who saved the use of my leg and kept me out of a wheel chair asked was “did you win?”

After the surgery I was told I had drop foot, but that nothing could be done. It is considered a minor disability. After the accident I did very little and got a bit depressed. Then my daughter got me running again. I hadn’t run for years although I had taken part in the Karrimor International Mountain Marathons in the 1980’s. I was very unfit so started a ‘run a minute, walk a minute’ programme, at first on the beach, and then on the trails. Unfortunately I fell over the foot. A lot. I fell so often I took up aikido so I could learn to fall safely. This definitely helped and reduced the number of hospital visits to be stitched back up, but didn’t solve the falling problem. I also had a problem in that it was easier for me to wear zero drop shoes, as any heel stack at all makes the likelihood of falling over the toes greater. However I cannot roll my foot and instead land with a solid slap and the lack of padding in zero drop shoes creates a real issue with foot pain. Back in the barefoot running boom I had a pair (Merrell I think) of zero drop running boots. I fell less in them but the foot pain was quite bad. I use poles to help with stability, which means I can only do events that allow them. 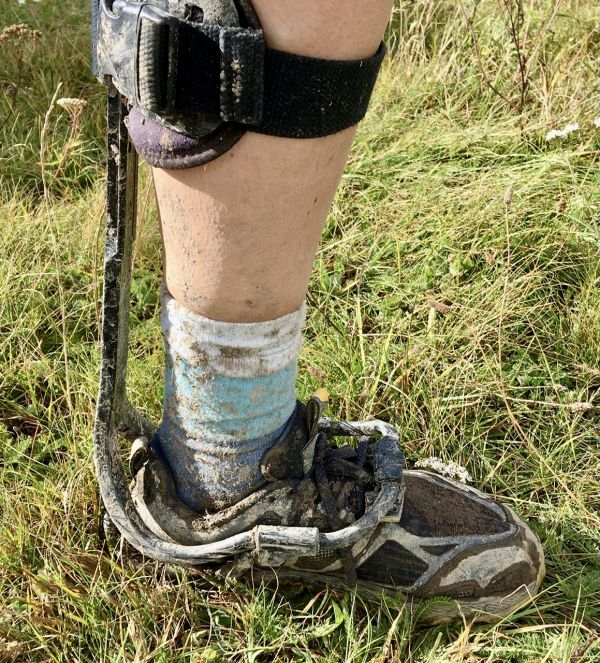 About 2 years ago I found a running with foot drop Facebook group. There are 604 members worldwide, and about 50 actually running. Trail runners are even rarer and I think there are only 2 of us in the group at the moment. But the real advantage of this group was that it introduced me to the Turbomed brace. The Turbomed was designed by a Canadian outdoorsman who injured his back in a Ski-doo accident. He got offered the standard plastic boot and thought…we can do better than this!

The Turbomed fits on the outside of your shoe which prevents it rubbing. It holds the foot in a neutral position, and you push down against it. When you relax it brings the foot back to neutral by acting as a big spring. The cage around my foot keeps my foot in a forward facing position instead of turning inwards. There is also a bar up the back of the leg and that helps with lateral stability. I still cannot bring the foot up beyond the neutral position so climbing steep stuff can still be tricky, but the Turbomed has transformed my running. I still use poles, and also have a set of mountaineering crutches for when the foot is worse than usual. 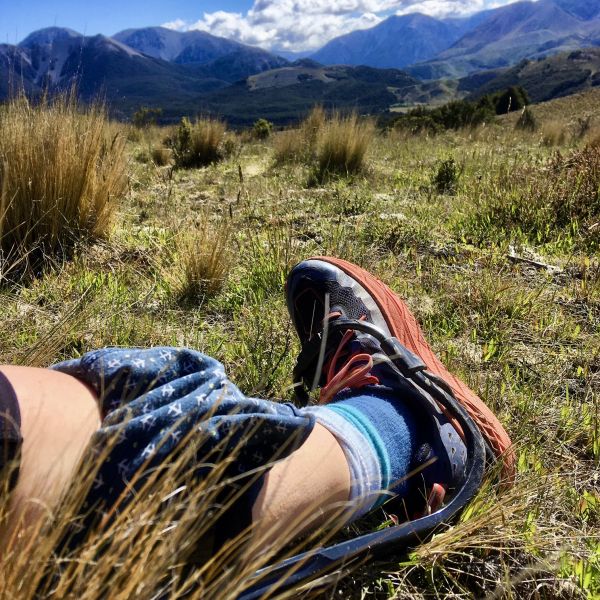 I will never be fast, I am unbalanced as my right leg has to do double duty, climbing steep hills is tricky, my balance is affected and I have both numbness and pain in my foot, but I am out there and loving it. I’m with the Manchester Rambler (song by Ewan McColl) in this, “For sooner than part from the mountains/I think I would rather be dead”. 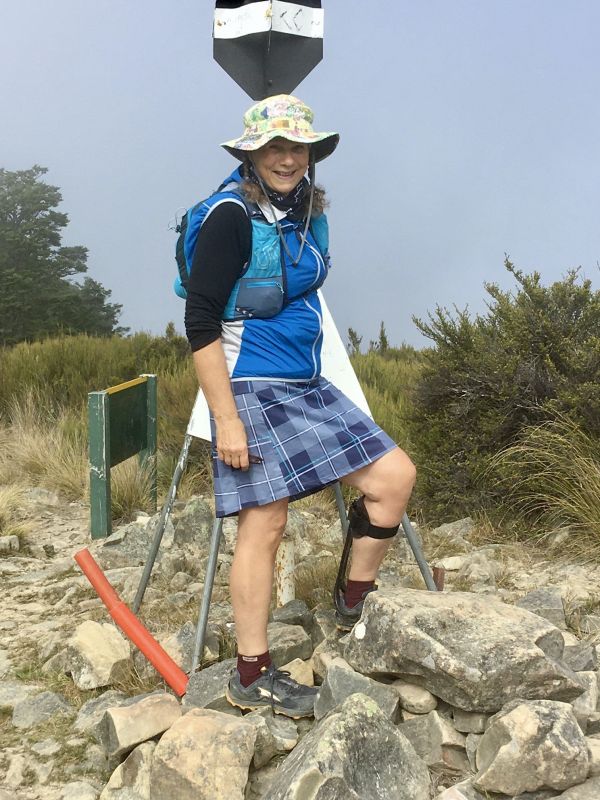 So there you have it. You can’t miss me when I am out and about, I’m the woman with the big black brace on her leg! Say “Hi” when you pass me and I’ll see you out there.