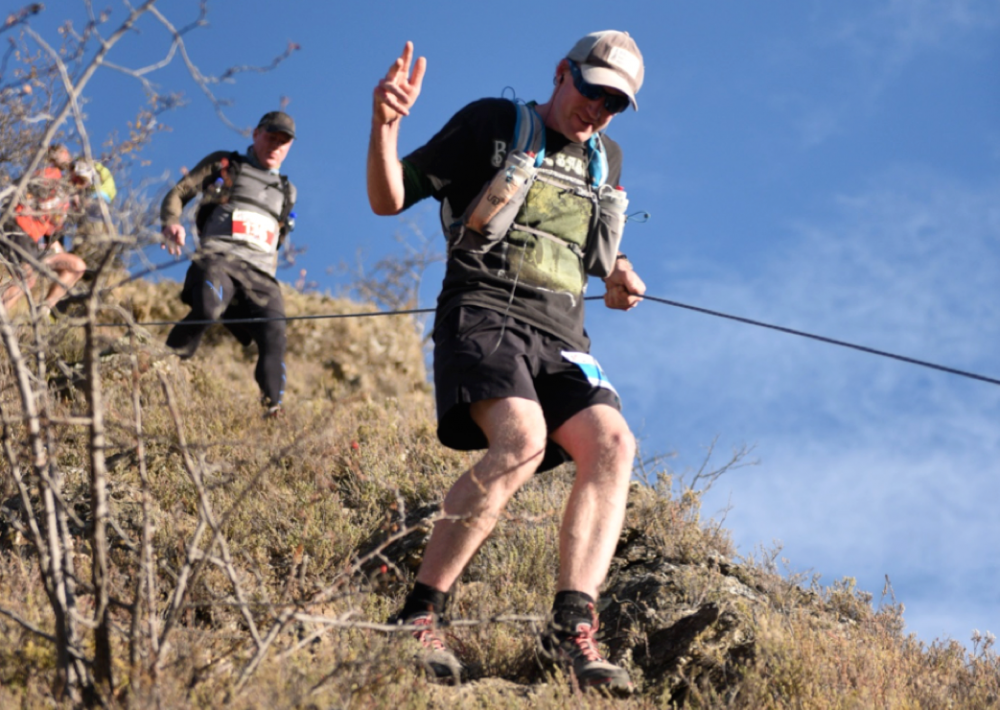 HANGING ON FOR DEAR LIFE AT THE MT DIFFICULTY ASCENT!

It's a tough sport. Really bloody tough. I am in awe of everyone who completes a trail race, Ultras in particular! A lot of my 2016 was full of stoke. I completed the Motatapu Marathon and 80kms at The Great Naseby Water Race but then I got hit with a curveball. I thought I was invincible and signed up for The Mount Difficulty Ascent - where I received my first DNF! I needed to get back some confidence as I had signed up for my dream trail race, The Old Ghost Ultra. I got lucky and landed a spot in the 2016 Kepler challenge which I completed in 8 hours 35 and won the award for Most Improved Time! That ended 2016, I was on a high and confident going into the 2017 running year.

The first race in January went well until the last 13ks on the river trail in Terry Davis's Big Easy Marathon where I died in the heat but I clocked in in just over 5 hours. Roll on The Old Ghost!...

I discovered that Mal and Sally Law organised a tour to the OGU - they organise all food, transport and accommodation - so I jumped at the chance and we got to stay at the awesome Rough and Tumble Lodge for two nights days prior and on race day roll out of bed and start the race with the other runners who had come from Westport at 4 in the morning! It was an epic couple of days getting to know like-minded trail runners from around the country. 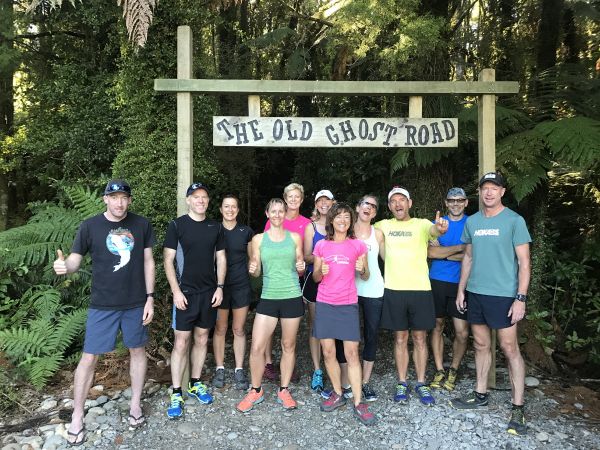 Race Day: wake up, shower, breakfast, race gears in the pack, wish everyone a good day and get ready to roll. The first 40km went by in a blur. I was on a high running through spectacular country. I pulled up and stopped to grab some food from my drop bag, but I probably ate too much and after that it all turned to crap on the climb up to the main range. The stairs were a killer and the heat probably didn't really help much either! I was fading fast and getting passed by a few people who asked to see if I was okay. It wasn't looking good and about 2kms from Ghost lake Hut I pulled the pin - I was done.

In hindsight I should have got to Ghost Lake hut and chilled out for a bit! But by that stage the chopper seemed like the easiest option as it was there and offering a free ride. I was really disappointed with myself but at the finish I got a ton of support from my mates which I was really thankful for. When you work so hard for something and don't get the reward it's a tough pill to swallow.

A couple of weeks off and I smashed out a 1 hour 32 Half Marathon down the Cardrona Valley Road. The fire was still there! Then I watched my mates get beaten up at Northburn, which is always inspiring. Next it was time for that Terry Davis (Highland Events) classic - my secondattempt at The Mount Difficulty Ascent. Weather-wise it was a primo day. 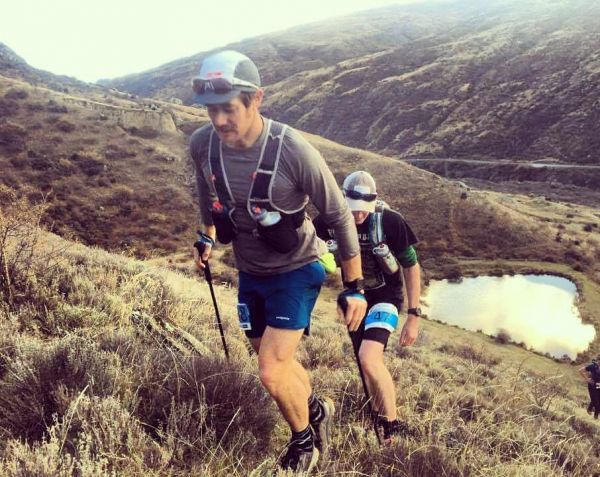 My mate Grant Guise cruised with me on the 2nd climb for a while (pictured left) and then vanished into the distance, but we had had a nice chat which was good to keep my mind on what lay ahead, the dreaded climb up Mount Difficulty! I passed Andy Town on course who wished me luck and made it to the top where all round nice guy and legend Ed Stevens made me the best Milo I'd ever had and told me I had a lot of time and was in good shape! I cruised along the tops and to the next aid station, taking my time. The following climb up to Slapjack Saddle took it out of me and before long the sweepers on quad bikes pulled up and said they had to pull me. I didn't want to give in but knew it was for the best! I had made it to 33k this year - 9k more than I'd managed at the first attempt! So I got a ride off the mountain where Terry greeted me. He said that a lot of people were interested in seeing how I was getting on during the day which made me smile. I had a beer and said "third time's a charm right!" 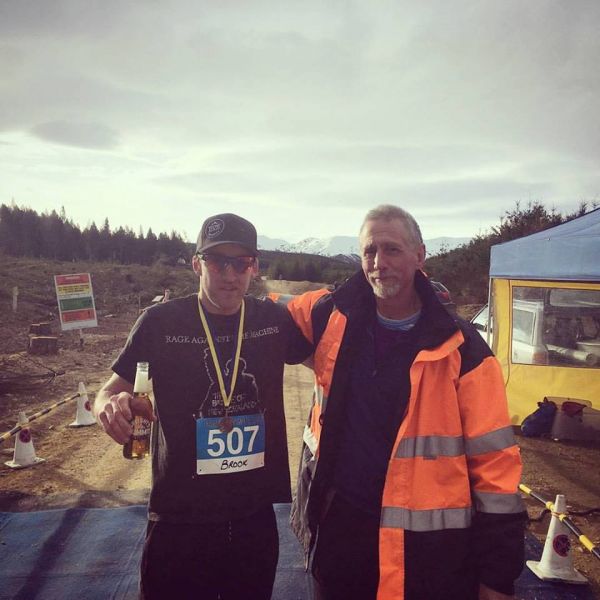 Next up was 50km's at Naseby. I didn't train as well as I should have for that and didn't show it enough respect. I had a great first 30km, but the last 20km was tough, yet I got it done! I remember race director Jamie handing me a Speights at the end where he said "well done mate, you have just climbed your own summit!" It tasted pretty delicious after 50kms.

Following that was my first and probably only ever road marathon - The Mount Cook Marathon. That's all on that one! 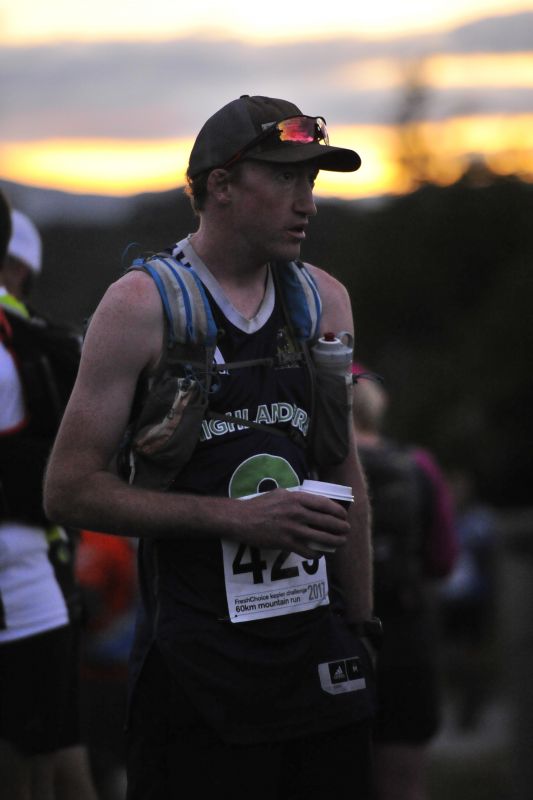 Then came my 3rd Kepler Challenge. Previously my training consisted of being a weekend warrior doing big missions and randomly jogging the odd km's during the week days. My work is pretty full on at times. I start at 5am and finish around 3 or 4pm, which can make getting motivated to go running tough some days. I needed change in how I trained so I joined up with Sqaudrun, who provided much-needed structure and a proper direction in how I train. So for the last 8 weeks prior to Kepler I trained consistently 4 to 5 days a week without missing a session and I came out at the end feeling fresh and ready for this race. I was feeling good but 3 days before the race I got a nasty cough and then got all stuffed up with a nasty head cold. I was pretty pissed off but had the time off and thought I would shake it when I started running so cruised to Te Anau on Friday as planned. 4am wake up, get gears ready and cruise to the control gates. I was feeling better - that head cold was still lingering but not as bad! The race starts, I was in between mate Fleur Douglas and trail boss Sally Law, who was telling me to run smart and keep my pace down. It was all going to plan. I made it to Luxmore Hut and put on more layers as it was getting pretty cold and looked like rain and some more hiking! Then you would never guess who was in the middle of nowhere cranking music, crashing cowbells, cheering people on and offering shots of tequila... my mate's Grant Guise, Ryan Carr and Brent Godsiff! It was a pretty aweome pop up aid station!

In hindsight perhaps I should have had some of that tequila! Rolling on, I paced well down to Iris Burn but yet again - it's the story of my running year - things turned to custard! Something upset my stomach and I couldn't keep anything down. My head was all stuffed up from the cold weather up along the tops and I had slowed right down and was struggling to run. Not ideal when I had a long hard 25km still to go. I made it to Rocky Point and had about a 45 minute rest. I contemplated pulling it but my mate Ernie Maluschnig hobbled past so I pulled myself together and started walking with him. Not even water was going down by this point and a couple of top sweepers by the name of Andrew Glennie and Matt Hamblett came along and helped me get to Moturau where I finally, reluctantly, pulled out. In hindsight (there goes TAHT word again!) I probably shouldn't have started.

So a tough year with lots of lessons learned. The best part about all of this is the friends I have made on the trail. And there is always next year!

A big thanks to everyone who has helped me on this journey so far, I couldn't have done it without the awesome support that trail runners continue to give!

The fire is still alive. I am still hungry. See you in 2018 at The Old Ghost Road Ultra, The Mount Difficulty Ascent or The Kepler (if I get in again!) 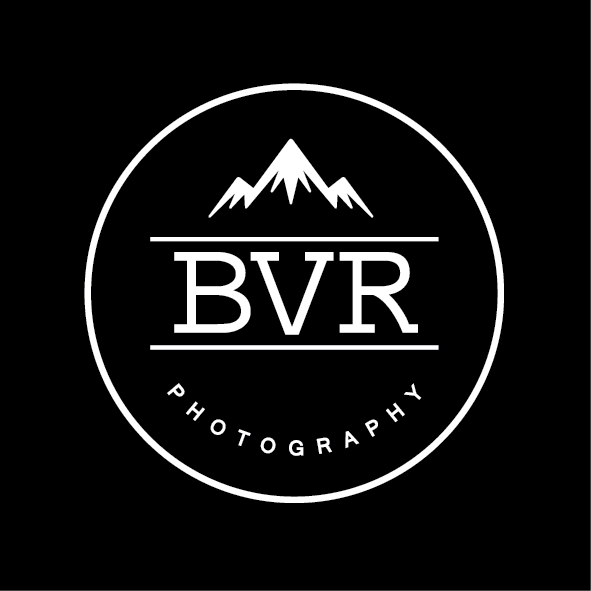 Footnote: as well as being a passionate trail runner, Brook is a talented photographer whose work has featured in Kiwi Trail Runner magazine.

Check out his BVR Photography Facebook page to see some of his work.