About 4 months back after the Queenstown marathon the achilles was pretty sore but I thought that that was enough time for it to get good and for me to get in enough training for the Triple Peaks. It was a good distance (55k is not too far for an ultra), it was a really good price and it was a great excuse to check out Hastings. Sadly I was very very very wrong about the leg, but it was still good enough to slug out a slow 10k once a week, a couple of weeks before the event, and since we had already paid for it and the accommodation, I thought what the hell.

I registered and picked up the goodie bag on the Friday evening, and finally it was a goodie bag with a few half decent things in it. When I first started with running events ages back, the bags were pretty full, but these days you pay a lot more for sweet bugger all. The Triple Peaks was cheap for an ultra (a bit over $80 I think for the early sign up) and along with a bag with at least a few useful things in it, you also got a free T shirt (but that may have been because I registered early as well), and a free local craft beer to entice you to the end. For such a good run (and well organised) it was great bang for buck.

Start time the next day was 7:30am and after about 2k we were out of the village, and hit the dirt about a another k after that. It was apparently a brand new course, going via Mt Erin, Mt Kahuranaki and Mt Te Mata. The weather had been good leading up to it, so we were able to cross the river and do the full course. We were doing the race with mountain bikers and they started about 15 minutes before us. The course was definitely a course more for light bikes though, it was so steep in parts that I ended up somehow just beating the last biker by a few seconds (and that was definitely not in any way because I was fast).

The temperature was perfect at the start and we soon hit a really good climb. I was starting to think that we were a good way up the first mountain when the trail took us to a top and then down through a long steepish downhill section so we would have to do all that damn climbing all over again. The climb up Mt Erin wasn't too steep and I got to the top after nearly 12k (at 1:35). I knew I was totally under-done for the race and was taking it easy. 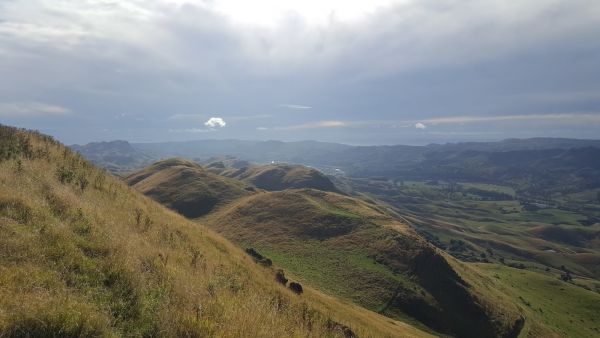 From the top of Mt Erin

Heading down to the river really took it out of my quads for the next few kms, and hitting the cold river was bliss for my feet. It was only about knee deep and wasn't flowing quickly so apart from a few bonus stones in my shoe, it was an easy crossing.

Now for the fun part. Up to the highest peak. Only about 250 higher than the last one.

After the river it was pretty flat and then just a gentle climb for a good while, and we just had to keep an eye out for bikers coming flat out back down the hill. As it was a loop around the mountain we only had to watch out for them for a small part of the climb. There were maybe one or 2 nervous moments when a slow mountain biker was overtaking a slower mountain biker with someone charging downhill.

We soon were all walking and I got talking to another runner for the next few kms which helped take the mind off the climb. I found that I hadn't looked at the map carefully enough, and I had thought that we wouldn't actually go all the way to the top. What an idiot - it's called the Triple Peaks. Then unexpectantly the final steep section hit and I started to hit the wall even though we were still walking. The last climb to the top was almost more of a scramble and my inital envy of the mountain bikers turned into just me being purely delighted that I wasn't having to haul one up that last section. A lot of bikers were having to stop to catch their breath even in the sections before that last push. I totally hit the wall at the top and spent probably 10 minutes having an apple in the shade trying to recover a bit. 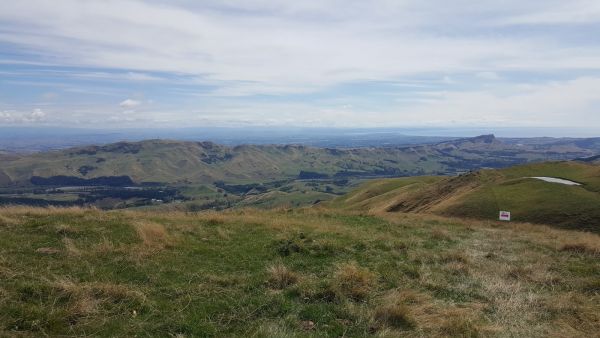 There was a cold wind at the very top after the aid station and I was happy to not hang around. The downhill was mostly a lot gentler and so a lot easier on the quads this time and I did a shuffle most of the way back to the river, and had another small break at the aid station there. We crossed the river again and I either walked on the slightly more technical sections or shuffled on the flat sections along the river to the bag drop which was about 44k in. Time to joyfully eat some chocolate salted pretzels before the last climb up the third peak. I overtook another mountain biker (and I was walking) on the steep first leg up and then we followed the flatish ridge along to the base of Mt Te Mata. 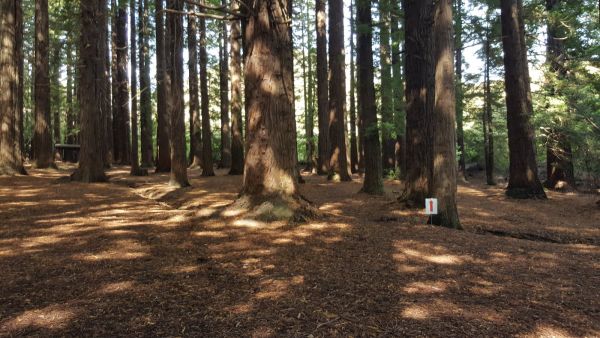 A small forest on the way up to Mt Te Mata

We lost sight of the peak, which was probably a good thing, went through a small forest and followed the edge of it until the last hurrah. They probably hadn't saved the hardest for last but the legs were definitely thinking otherwise. Even though I was walking with little mini steps I still went past a few more bikers, made sure I never looked up, and finally made it to the top. 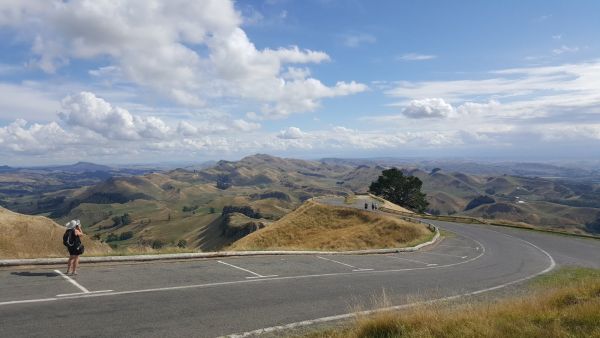 At the top of Mt Te Mata

A nice and gentle road down beckoned. In the 2nd half of the Kauri run the downhill was worse than the uphill, but this looked great. Sadly though, after only about a km we had to go onto a mountain biking track so there were a lot of ups and downs, which is really annoying when your quads are shot, but it soon flattened out. Soon a sign said - 5k to go!

That is normally one of the best things you can ever see in an ultra but maybe not when you are 53k in on the Garmin and you were thinking it was only going to be 55!

We then hit a car park, followed the road for a bit, ducked into a reserve and then hit the edge of town. I was waiting and waiting to see the 2k to go, but the one after the 3k to go was the 1k to go. Wow that felt good. Someone was just teasing us with the distances to go, or maybe there was no 2k sign, but I didn't think I was shuffling that fast. I kept at it and the marshalls stopped the cars to let me cross the roads, even one time making sure I went around the roundabout the right way. Then I could hear the loudspeaker at the finish! I saw my kids at the entrance to the park, gave them a high five and then  mustered some energy to get up to a fast shuffle to cross the finish line after over 9 hours.

It was a really well run event, especially given it cost relatively little. There were volunteers everywhere making sure that you didn't take a wrong turn or allowing you to cross the road. Given the low cost although they did say that there would be aid stations at the top of each mountain and at the river crossing, as expected it was fruit and water only, and it was clear on the web site to anticipate having to look after yourself just in case. I took electrolyte tablets with me, which every non pro ultra runner should probably take anyway.

The scenery was stunning (the photos never do it justice) and it wasn't an overly technical course, at least compared to the Great Kauri Ultra, and probably to most kiwi trail ultras from what I have heard. Havelock North is a brilliant little spot and the Irish pub in town looked great. Sadly I didn't have the appetite so soon after finishing, so we will have to take at least one more day off work to spend there next time!

Ps. The achilles is surprisingly feeling pretty good but then again most of the running was more shuffling and I walked up all of the decent inclines. The quads on the other hand.

Have you ever run the Triple Peaks race? If so, we'd love to get a quick Rating & Review from you to help otehr Wild Things looking to follow in your footsteps