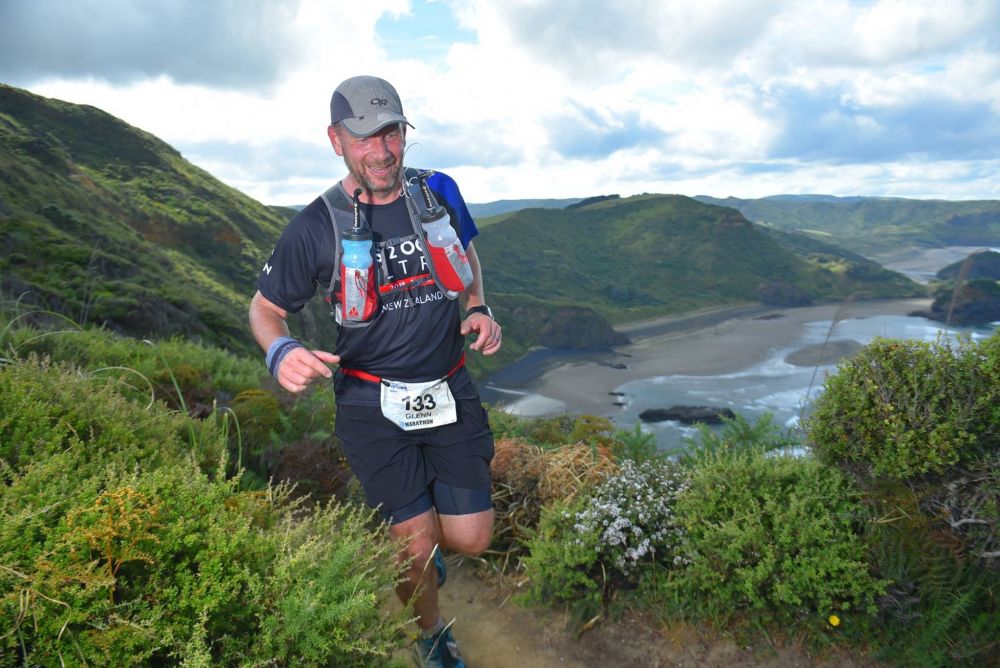 Doing my best to smile for the camera! Pic by Photos4Sale

For those not familiar with it, the Speight's West CoasterÂ was for a long time regarded as the toughest marathon in NZ with close to 2000m of elevation gain over the course. These days, with the Shotover Moonlight Marathon and Mt Difficulty Ascent on the scene, I would personally put it at a very solid 3rd - but it is still brutal.

After Allan Ure from Photos4Sale.co.nz gave me some words of wisdom beforehand. It was clear there was only one race that mattered and it was mine for the taking with the right race plan. So I ditched my Squadrun Coach Kerry Suter and followed Allan's advice to the letter.

After the first five I could not believe I was leading. There was a field full of superstar athletes and I was footing it with the best of them.

At the ten I still felt fresh, my form was solid and I had opened up a gap on the chasing bunch.

At the twenty we really started battling it out and I knew I had to give it all if I wanted the remotest chance of glory.

Then it happened. Allan was there and took that glory shot and the triumph was real...... I bloody did it!!!!!

That was the best, most perfectly executed first thirty seconds I have ever run and I accomplished my goal and won the only race that mattered to me and "Coach Allan" - the thirty second dash for glory to be at the front of the field for the camera man! 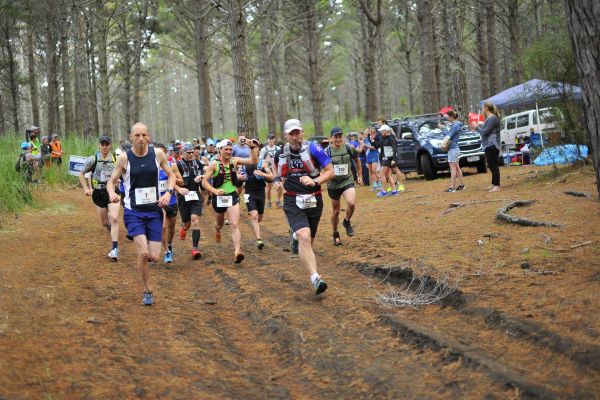 At that point nothing else mattered. I was a champion and the following 7hrs and 15minutes of pain, humiliation, dehydration and manic depressive regression would be worth it.

With the race for glory behind me I settled rightfully into the back half of the pack for the remainder of the day. Once out of the start/finish area at Bethells Beach the course heads south with a tough, sandy climb and around 200m elevation gain in the first 2km. There are then a few short sharp undulations for the next 1km as the course loops around past Wigmore Bay then turns back north towards Bethells and another crazy descent followed by a crushing climb as we complete the southern loop over the first 9km of the course.

I have struggled with a back injury over the last few months and had mistakenly thought that rest was a good option for recovery vs strength training. Those first few kms were a massive wake up call. My base fitness had been eroded so while I could cruise nicely along the sporadic flat parts of the course, the uphill segments destroyed any fragment of confidence I had as my legs quickly turned to jelly.

Heading out towards Te Henga there is another tough sand dune section so, like a dodgy drunken uncle joining the Conga line at a wedding, I slipped in behind a lovely young lady to sneakily use her fresh footprints in the sand as firm footholds and save my calves and a bit of energy for the brutality of what was to come.

The Te Henga trail section was from around the 12 - 22km mark. It was actually glorious for the first few km. The climbs are always tough but there was a little cloud cover and a slight breeze so I managed to cruise along quite nicely for a while under the false impression that everything was actually going to be okay. I hit the 21km mark almost bang on 3hrs, running in a train where we were keeping each other in good spirits. Before the race I felt anything around 7hrs would have been a good result knowing how tough the course was and how little training I had been getting in - so I knew I had been going way too fast for my current fitness levels. 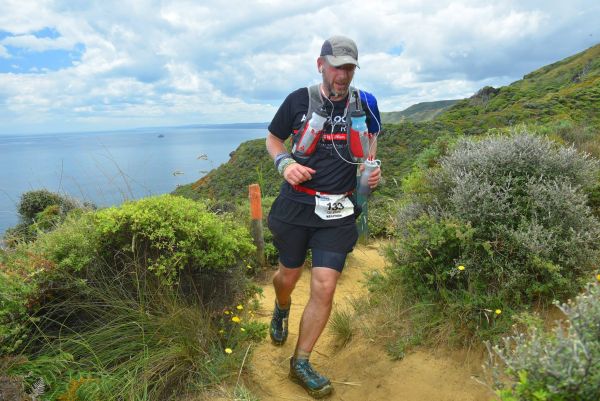 The sun had come out in full force at about the 20km mark and the wind completely dropped away. I could literally feel the atmosphere sucking the energy from me. Just like an iPhone two days after it comes out of warranty my internal battery life went from 65% to 2% in a matter of minutes. Just before the dreaded stairs heading up to Constable Rd I went from confident I could last the day to fearing complete shutdown. Coming into the Constable Rd aid station I was at my lowest point. I still had half the race to run and nothing in the tank. The only thing that kept me going was the thought of my 15yr old daughter Brianna who was volunteering back at the finish line. In 2016 as a 14yr old she had asked me to run the West Coaster half with her as her first half marathon and while she did it tough she guts it out and never complained once. I stuffed my face with some much needed calories and dragged my sorry arse down to the Goldies Bush loop section.

The next few k's are very runnable but I was so defeated I pretty much walked for an entire hour, even the downhills. I was one sad sack of shit. It was only when I turned around to see the amazing Ronald Chen, who is in his 70's, cruising along at his usual rock steady pace that I gave myself a big slap and got my shit together.

From there on my race improved. I loved the stream crossings and technical aspect of Goldies and when I got back to the Constable Road aid station my mood and energy levels were in a much better place. I pulled out my secret weapon and filled an extra water bottle with coke so I could have a sugar induced rush to cope with the brutal sun and killer climbs that the return journey across Te Henga was about to deliver.

I even managed to sneak past 20-30 other runners before my coke ran out just before coming off the Te Henga Trail. But by then the worst of the terrain was behind me and I was about to finish. 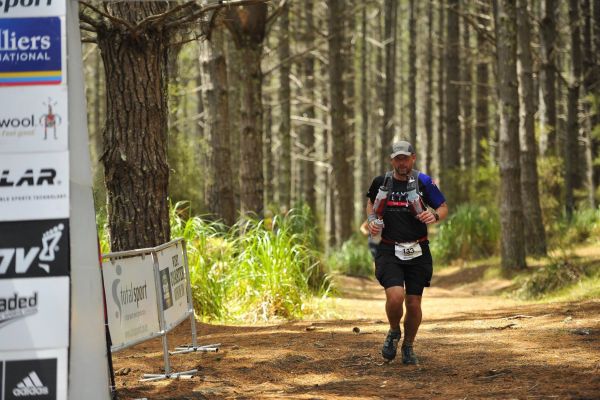 Brutal depression then set in when I realised that at the 42km mark on my watch there was still actually another couple of kms to go and there was less than zero left in my tank.

Pride was the overwhelming feeling when crossing the line and having my daughter present me with my medal. 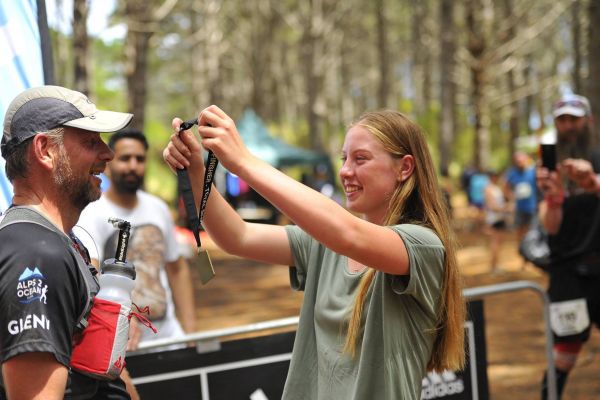 After swearing I would vomit if I even attempted eating, I even managed to smash down two steak and cheese pies in a tried and true "healthy" recovery plan on the drive out.

I hope to be back fitter, faster and fresher in 2018 to defend the 30 second dash for glory with Allan as my greatest source of inspiration. But in the mean time I may just have to go crawling back to Kerry and Ali and the Squadrun Gang. 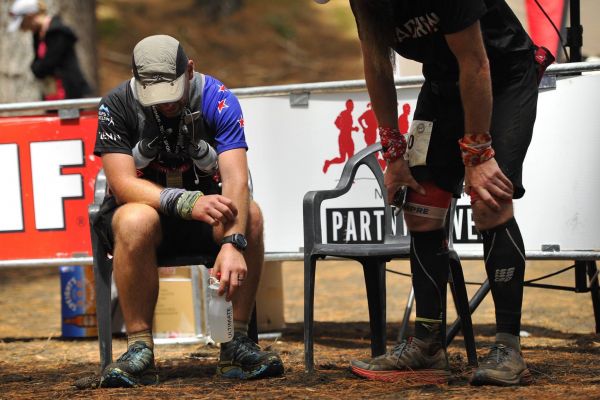