Dwarfed by the scenery - what a place to run! Photo by Photos4Sale

Wednesday afternoon and as fate would have it I happened to be mindlessly scrolling through Facebook, whilst on a break, when something worthwhile finally pops up. Hello, hello I seem to have stumbled across a fellow Wild Thing giving up his two entries to the Tussock Traverse - just a few days out from race day. Bingo! That sounds like a bit of me for the upcoming weekend. I quickly grab the opportunity for entries to the 26km for myself and the 13km for the wife. Mountain run and brownie points, score! I pay the transfer fees and sort out the details the night before. (I’m sure the admin greatly appreciated that) and I’m in, ready to go.

I had the Ring of Fire approaching on the horizon. I figured running the Tussock Traverse would be a great way to see the last third of that run, to scope out terrain etc, and have an idea on a realistic timeframe to get around it (although there would already be 50kms and a few thousand vert in the legs). It was the perfect practice race it seemed.

Still, a couple of days notice wasn't ideal prep time to get my head into a race, or maybe it was. Not having much time to think about it allowed me to just get to the start line and run. Without a plan or too much pre-race tension or nerves. Almost in its purest form, something getting harder to find with so many events on and all the training that goes with them nowadays.

The heavy rain during the week had done considerable damage to the access road to the start line. There was a second to last minute contingency put in place to start us at a brand new secret location. Apparently removing a big hill at the start of the race. Quite an engineering feat I would’ve thought but it turns out not so, we were just going to go over there a bit and avoid it altogether. No problem I thought. I’ve done their events before and found them to be totally professional in all areas so I’ll leave this to the experts. No need to panic, just pack my vest with the compulsories and get ready to hit the sack.

Race day starts with a 4am wake up and a bit of a drive down to National Park. Registration and bus pick up is at the Chateau Tongariro ( also doubles as the start line for the shorter distances of the day). Breezing through rego I find myself soon on the bus and about 45 minutes to the new start location. We are early, people just milling around creating a pretty chill atmosphere.  Definitely can’t hold on to any pre race nerves when you've got time to look around at that scenery I thought. Always a feature of trail runs in this country is the relaxed start line vibe and this one is certainly no different. We all make our way to the start line after a just as casual race briefing. Sheepishly though, no-one wanting to get too far to the front. Definitely the feel was one of a good time not a fast time. I count back 20 or so spaces. Plus 10 or minus 30 was my thinking at the time and slot into my place in the grid. I see a few familiar faces around me and then we’re off.

A slow starter myself, today is going to be different. I head out a bit stronger than usual due to there being an out and back section early on in the course, the plan being to get out and back before the masses are coming the other way and I get pinned down, while still leaving enough in the tank to get home safely. The first few km’s are pretty soft and sandy with a bit of wet clay in places. It was easy enough if near the front but I can’t help thinking it would not be so easy after the sold out effort of 500 runners had cut it to pieces.

Uncomfortable but going alright, the plan had worked well and I was back on the single track heading steadily upwards in no time, with most of the crowds behind me. Even after only 7 or 8 km’s it was spread thin and I could barely see any other runners around me. Such is the vastness of the landscape we were running in. When I did see another runner they paled in comparison to what we were surrounded by. I usually like seeing someone in front getting closer, but for now, there was nothing but nature in my view and for me to chase down. The lead pack was well and truly gone. It was the other runners behind me that had most of my attention now, constantly checking over my shoulder for one of those familiar faces to creep up on me, but I couldn't focus my sight on anything other than tussock. 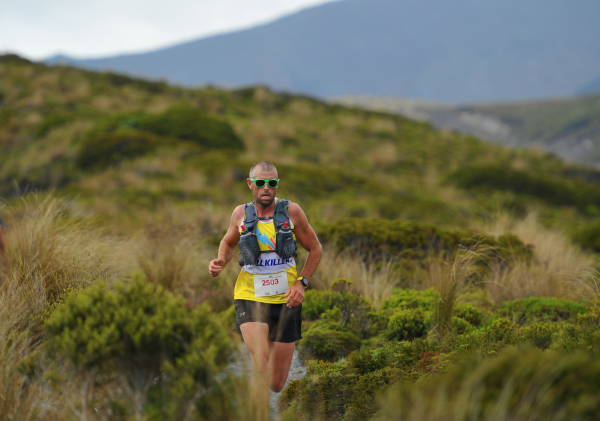 Time to just focus forward on the trail and get into a rhythm I was telling myself. Occasionally looking up and around to take in the world class views before being sharply reminded to pay more attention to what’s going on directly in front of my feet, as opposed to the neighbouring volcanoes. The terrain was more demanding than I had anticipated. Having run The Goat before, and considering this to be the sister event, I was pleasantly surprised. If it is the sister event then it’s definitely not the annoying little sister type, but more of a non-identical twin sister perhaps.

Plenty of race lines to pick, boulders to avoid and rain ruts to negotiate. Tussocks are everywhere, surprise surprise!  As the race goes on the incline picks up and a few short but sharp staircases get thrown into the mix. Even the distance is deceptively tough. At 26km and 600 vertical metres of climbing it’s noticeably more than an average half marathon, and a good nudge towards tackling a trail marathon.

Time kind of stands still as I tick off the distance markers and start to see a new lot of faces from runners heading towards me, competing in the shorter distances. Must be getting closer now, I reckon one or two more climbs and I must be able to see the Chateau. Time to spin the legs out and have some fun as we are finally coming through some descending portions of trail, through a bit of native bush to complete the line up and provide a welcome piece of shade. Some short sharp stairs down and a few technical bits provide a reminder to not run outside one’s comfort zone.

Nearly done, through a gravel path and on to the finish on the lawn at the Chateau. No place changes for 20-something km, and I hold 8th spot. I’m pleased with that and pleased to have run another fantastic event in my own back yard. I’m done, must’ve been pushing a bit harder than I realised. Complimentary foam rollers by the massage tent. Nice touch, don’t mind if I do.