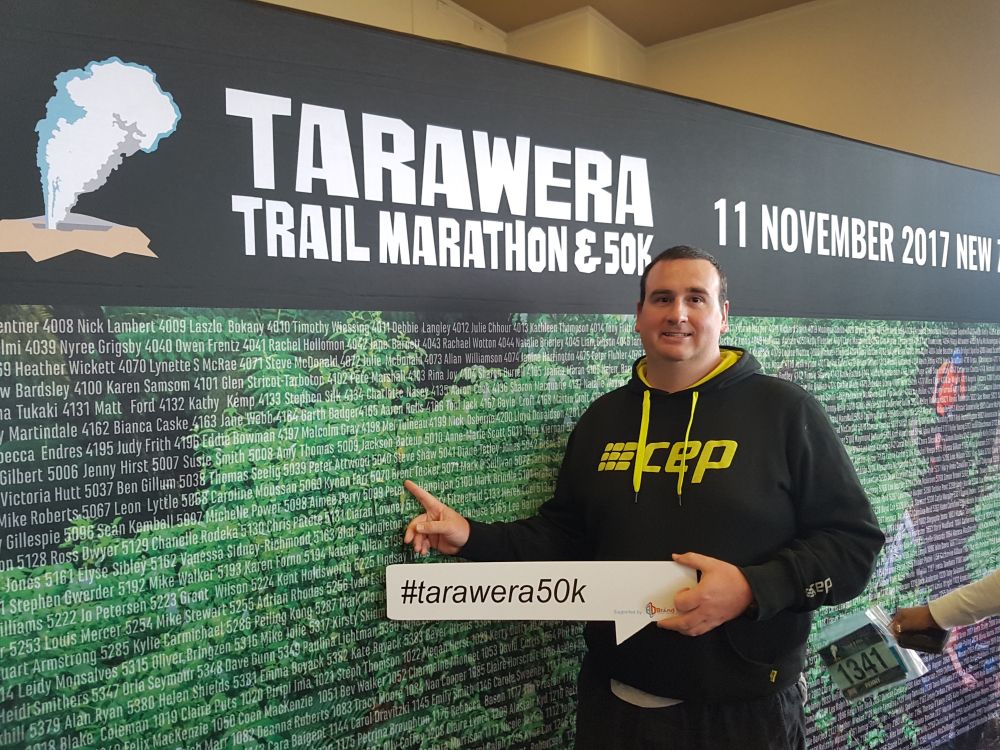 Ready for the big show. Photo by Photos4Sale

Yup, that's me. Now you're probably wondering how I got here...

Nine months ago I wrote the above after entering what would be my first ultramarathon (and by default marathon), and now the day had finally or too quickly arrived, depending on how you look at it. How I got there was nine months of blood, sweet and less beers.

With enough hard work hopefully done, we packed up the family and headed down to Rotorua for a long weekend of fun(?). But we'd just arrived in Rotorua when my mate Ben called me to say that thanks to some issues he's been having with his heart he wouldn't be taking part. This was gutting news, Ben had been working hard for this and I was really looking forward to cracking a beer with him at the finish line. So this now meant it would be Tim, Graham and myself toeing the line for our first ultras, with Ben providing support.

My nerves only really kicked in while I waiting for Ben and Tim to collect Graham and I, and take us to the start line. Suddenly everything was wrong or had been forgotten. I double and triple checked my pack and check list, and would have started a fourth had it not been for a knock on the door. It was time to go, but after some wife mandated photos of course. 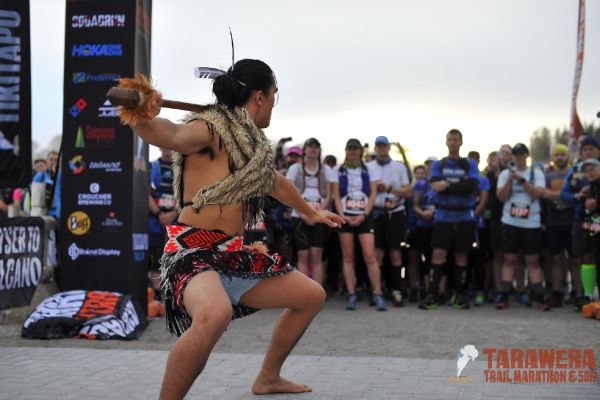 The start of the Tarawera Marathons takes place inside the Te Puia Thermal Field in the steam of the PÅhutu geyser, (the largest active geyser in the southern hemisphere). And if that's not enough, how about facing down a haka? It certainly sets down the challenge we're about to face.

We'd arrived in time to see the 'walkers and tortoises' start and with them Tony Firth out for his first marathon, having only started running 12mths ago on a similar journey to me. It was also great to see a bunch of other friends before we all had to take our places ready for the start.

With a countdown we took off with joy in our step and a song in our hearts. Skipping merrily along we exited the park and off into the Redwood forest. The first 7 or so kilometres are though these giant towering trees and into the first aid station, or more like buffet station. Grabbing some apple slices and shoving jet planes into my vest, I headed off for the next section.

While it had been relatively flat to this point, we would start climbing to the next aid station through young pine trees. While on the climb to Pondy Vista I caught up to Tony, who despite the hill, was in good spirits. At the top I was happy to see a compulsory gear check, as if there is anything that really grates me, it's people not carrying their gear. And from what I hear they removed a few from the course, so be warned people.

Moving quickly through the party town of the Green Lake aid station it was up some silly steep climbs and onto a quick fire road section where I saw Rhys well onto his way to his third place finish. Leaving the road lead to a fork in the trail - left for 42, right (and straight up) for the 50. While the two ladies I was with debated which fork to take, I didn't give myself the chance and took off to the right and off for our loop of Woodstock farm.

I happily bounded along up and down the sheep tracks. I was feeling pretty good at this point, around 21km in and almost halfway. Once again I grabbed some apple slices, water, and a couple more jet planes at the western themed aid station. This would pretty much be the last solid food I could face and I'd be relying on my custom Infinit Snail mix now. 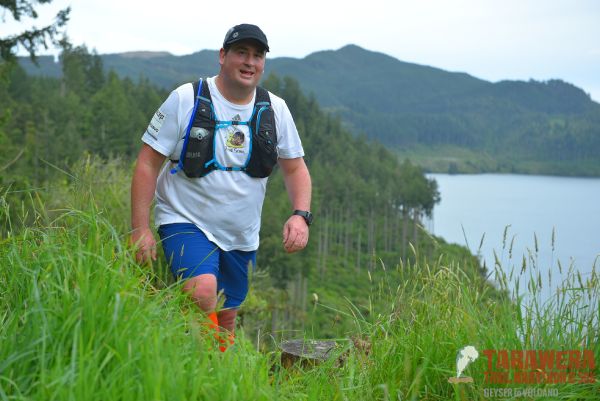 After the farm loop and back though Green Lake aid station (28km), it was wide forestry roads and a few km's of tarseal to the next aid station at the Buried Village at 35km. This is the 'big' aid station with our dropbags and Devonshire teas on offer. With the prospect of damp trails I'd made the call to start in my Icebug Oribi's, but they had started to rub a bit, so I was looking forward to my Anima's in my drop bag. 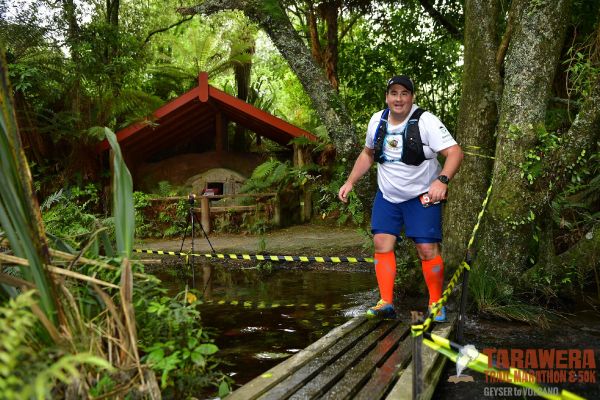 Running through the Buried Village I wondered what the tourists thought of all the sweaty runners passing by. Once into the aid station I saw Tony again, now busy making some K-Tape gloves. While the scones with cream and jam looked soooo good, I didn't think I could stomach them and settled for a lovely cup of tea while I dug into my dropbag.

Slipping into my faithful animas felt like slipping into some old friends (ah, yeah, that sounds a bit odd), and a new shirt was most welcome. A bit more Snail mix in the pack and I headed back out. A few km's later I realized I'd made a few boo boos which I'd be paying for later. While I had packed my poles and can of Triglide, I'd forgotten both - and I didn't try to eat anything.

While I was pushing to run some stairs around the 38km mark I started to get a bit light headed with a touch of tunnel vision. Time for a break and sit down me thinks and, as I think my blood sugar was a bit low, I forced down some jet planes from 17 odd kms ago. I also slowed myself down a bit and, to my annoyance, walked some of the more runnable sections to the next aid station and glasses of coke - I also thought it not the best idea to crack into the beer I'd grabbed from my dropbag.

Twin Streams aid station (complete with pizza) marked 42kms and, with a little dance, my first marathon distance. Finally getting some sugary drinks down me I felt a lot better, and I was able to run out of the aid station and off to tackle the first of the two final hills. My uphill legs were in pretty good shape thanks to the Waitaks, but the downhill legs? Well they were crampy and had been left a few doz k's ago.

Before the event I'd loaded the map into my watch, which was giving me an ETA to the finish line. While I'd been watching this estimate pushing out for a while, at the top of the last hill and with 2km to go my watch was predicting a 8hr 59min finish. With that, my target was now to get under that 9hr mark, so I pushed what I had left in my legs down the hill and onto the beach into Hot Water Beach. 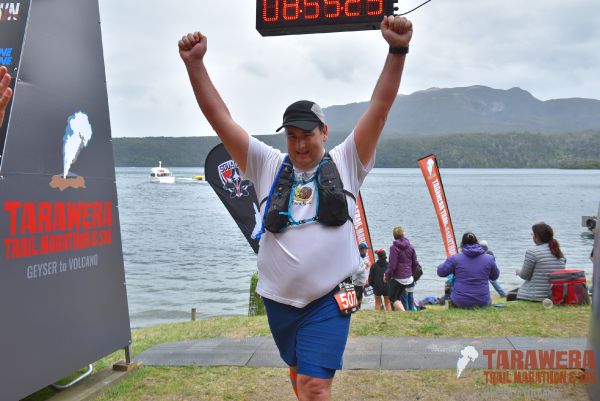 A few hundred metres from the finish and hearing the announcer, it started to sink in that I was actually going to do it and finish. I'm not going to lie, there were misty eyes going on, and I didn't even notice the little hill into the finish line. A quick glance back and I see 8hr 54min, I'd done it - I'd finished my first ultra and in under 9 hours!

Things were a bit of a blur after that for a bit, I grabbed a beer, hug from the boys, my finish line bag, and a much needed chair. In fresh clothes and a few beers in the belly, we lined up for the boat home just as the rain started. With a mixture of fatigue, adrenaline and alcohol, we were in pretty high spirits. And while I didn't recognize him at the time (blurry remember), my suffer buddy from Waitomo, Tonci, was a few people back having finished the 50km walk.

As we reached the front of the line, and with the next boat arriving I was disappointed that I wouldn't get to see Tony finish. But as luck would have it, he just then appeared on the beach and managed to run it in over the line before collapsing to the ground. It was awesome to see him finish what he started only 12 short months ago.

While everyone else had been hoping to get on the jet boats for a quick trip back, we where stoked to see we'd lucked into the classiest boat in the fleet, the catamaran. Warmly tucked in the cabin we enjoyed the rest of our drinks (yes, my finish line bag was mostly made up off beers). Finally coming back into cell coverage we informed our wives that we were in fact still alive - and uploaded Strava of course.

Having had such a disappointing time at last years 23km distance of this event, I really wasn't expecting or prepared for how completely different and enjoyable the longer distance was. I loved nearly every moment of it, and if the schedule suits I'll be back.

Now with the confidence of finishing an ultra, I've got to hit the hills to get ready for Raglan Karioi - NZ's steepest race. Which looks like it will also have the best views.

This blog was originally published on Brent's own site, The Kiwi Trail Snail. Read more of his trail musings here.