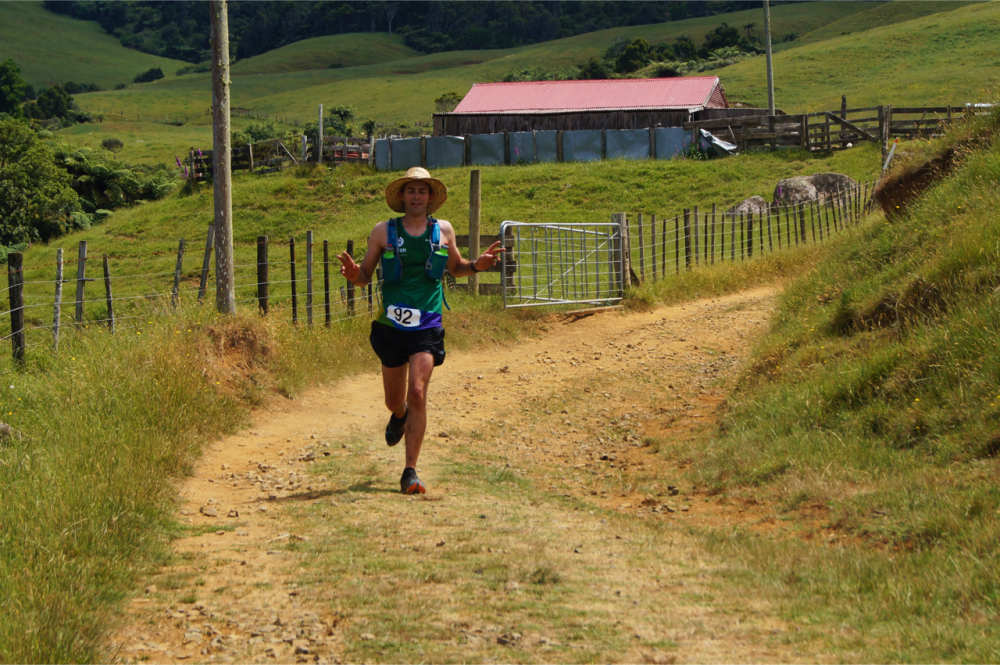 Dion on one of the few breaks from intense vertical! Pic by The Bold Elephant

They call the Raglan Karioi TrailÂ a "mountain run," I call it a 24km adventure. The race info is suitably skimp to lull you into a false sense of security. Take the opportunity to look at the Map-O-Meter. It's got 1800 metres of vertical gain, 1200 metres of gain is pain, 1800 is well,.. it's just more. Basically it's 5km straight up, then 9km down, 5km up and 5km down, or thereabouts. And you better save yourself for the downs or you're going to fall hard. There are some easy bits, there's gravel roads, where you can run fast in the dust of the cars fish-tailing past you. And there are drinks stops which are easy too. But the rest is a challenge, they call it technical. This run is the most fun I've had in I don't know how long. If you pace yourself and smile, you'll have heaps of fun.

I arrive about 6:45am, start is 8:00am. There's heaps of parking in a paddock right near by, there is essentially no walk required. They have 4 toilets which doesn't sound like many, but it's more than enough for the amount of people. The setting and setup is rustic, it's a paddock with a few gazebos. Everyone is nice and super helpful. This is genuine good NZ stuff. There's a race briefing at 7:50, listen there's good advice. Essentially it is: 1, use your hands, 2 pace yourself so you can do the final climb. 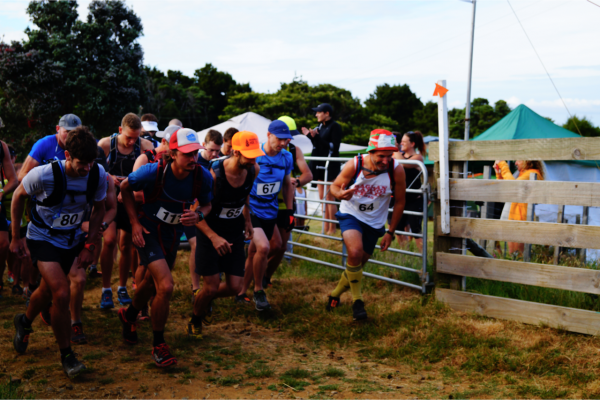 So what was it like? Well the gun went and people tore off, ignoring race briefing point 2. I decided to heed the advice and walk. I was dead-last across the start line, probably about 20 seconds behind those in front. Anyway, I started to talk up the hill. By halfway up, a third of people were on the horizon and I'm with the last four. It's gentle slopping clay drive-way. There are tiny flats where you can do a tiny-jog, but the rest is walking. Most were running and panting hard all of 500 metres into it. Walk don't run.

You then cut off the drive and up a really steep grass paddock. Just keep swimming (walking) Dory. Walking up this is a good opportunity to overtake those who jogged the first part, as they puff and pant.

After a bit you cross a fence and you are in the forest. This is your classic NZ kauri, rimu, totara forest. So you'll be scrambling over tree roots and jumping stuff, and it's all up hill, so hard work. It continues like this for about 5.5km to the junction aid station. There are steep up bits, and the occasional mini-down, but it's mainly up hill.

It's 600 metres vertically up from the start to this 5.5k mark/aid station. This is a junction, you go left. On the way back you'll pop out from the right of this junction. There's a nice person with water, oranges, apple, pop-corn and lollies. Two orange slices and an apple and I'm off. 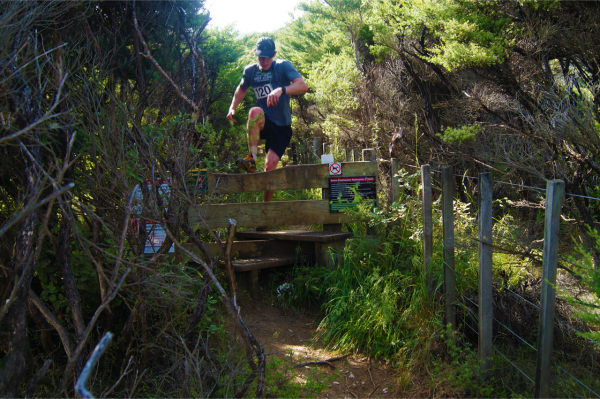 This is where it starts to get hard. You're on the ridge line now, there are boulders to jump, edges to tip toe around, and at one point a gap, where you jump from one boulder to grab the tree branch above your head, and swing to the next boulder. Just keep running Forest and you'll come to the next obstacle, a ladder to climb up, check out the view (it's amazing when you're not in mist as we were first time through). Now down the ladder over the other side. You're now starting to head down. There are some chains to descend. This part is rough, grab the chain with two hands and go abseiling backwards, it's quicker and easier than sideways or forwards. Your chain will run out, jump onto the next chain, that'll come to an end, jump from the tree branches to the ground and carry on. Easy huh!

Shortly you'll pop out onto the grass headland, here you can pick up some speed. You'll pop back into the bush and out of it onto the road, you've done about 7km, here you'll find some more nice people with with water, oranges, apple, pop-corn and lollies. This time I ask them to fill my bottle up, I've used 500ml to this point, we're about 50 minutes in. Once again two orange slices and an apple and I'm off.

Now is the time to push it hard. You've got gravel road to go down. It goes up for a little before going down again. Keep pushing. After 1 km or so you'll be re-directed onto farm land again, walk up the grass fast, don't push it, there are flats to run at a good honest pace once you're at the top. Now you zig-zag your way up into pine trees. You come blasting down a loose pine needle surface, make sure you can stop at the bottom and you don't run into the fence, it was a close call for me. A little bit further and you're on gravel road again. This is the relay change over point. Keep running down and push it on the road, you can gain time here. Soon you'll turn sharp right and up to Raglan Karioi Lodge. You've got a 400 climb to the aid station with water, oranges, apple, pop-corn and lollies. I should have run this little incline because I had the aide station to recover at, but I was lazy and walked. You've run 14km by now, and this is the start of the 10k race too. I have consumed 1000ml total at this point, and I fill up both bottles so I have 1000ml to see me to the end. Two orange slices and an apple and I'm off.

This is where the grunt work comes in. You grunt it back up to the intersection at the 5.5km point. It's only 5k or so, but it's tough, all uphill till where you've done about 19km total. Most of it is bush except for where you pop out at high points. By this stage I was dripping water, all my clothing was saturated in sweat. There's not much to say except keep moving, just walk, conserve yourself, but push the walking to keep the pace up. At this stage some 10k runners will pass you. Jump on the back of them to power walk past the slow walkers. Some try to run, but unless you're an elite, it's easier and more efficient to walk. A few more ladders, abseiling down ropes, boulder jumping, walking along edges, jumping to some tree branches and you'll be back at that 5.5k intersection.

I've consumed 900ml of water in this little 5km climb. So at the 5.5km junction aide station I fill up one bottle to 500ml, grab two oranges and an apple and am off. I wasted too much time here and the pack I was with were out before me. Now it's time to descend. You've conserved yourself right? Cause now you push. It's hairy in places. Fortunately the descent is gentle at first so you can warm up again. On the steep stuff you need to go fast, just concentrate keeping on your feet. This is a good place to overtake those who have overdone things.

You'll come to that fence you jumped on the way up. Now you're out in the open on the grass hill descending. It's time to bomb down, like you're a mogul skier. Mind the big rocks hiding in the grass, they'll at best embarrass you, at worst break an ankle. Slow down before the clay road, it gets rough here. Jump onto the clay road. You've got 2k or so to go; push it. It's gentle downhill and now you can catch people. Make sure you slow down before the finish line, as it's loose dirt and you don't want to fall and embarrass yourself there like one person did.

Oh, and remember I walked the start, and saw people on the horizon. Well, in all my walking I went from last, or 79th to 13th overall. So I somehow overtook 66 people to be 13th overall and the 3rd old man (Men's 40+). Listen to the race briefing, use your hands, pace yourself and have fun.

And that was that. The most fun I've had in a long time. 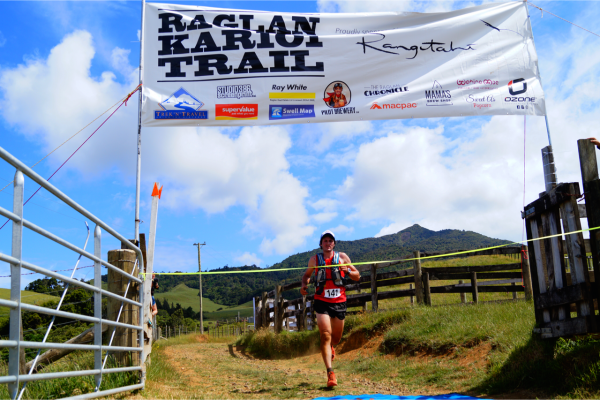 After you cross the line, you'll be given a bottle of water. After finishing that, I helped myself to two sausages and two Mama's Brew Shop Craft Kombucha and shared some yarns.

Two days later, my arms and shoulders still ache from hauling myself up things and my quads are still sore from bombing down that last 5km, but hey, there were people to overtake.

You've got to give it a go.

Check out Dion's run on Strava (make sure you're logged in) or Garmin Connect.

All pics by The Bold Elephant