The Agony & The Ecstasy of the Ultra Easy

The Agony & The Ecstasy of the Ultra Easy

At 3am on Saturday Jan 27th 2018 I lined up with a bunch of hard nuts at Luggate Creek, to start the 100km Ultra Easy.  This is another Terry Davis (Higland Events) wonder. That means when people ask you why you do it, you wonder too. But this time even Terry wondered if he’d gone too far. Wanaka was forecast to have its hottest day on record, and man did it deliver.

Some did it as a relay of five, some of two and others just set off into the night on their own. Some of those would not return until the next night.

Amazingly, at this ungodly hour, there were course marshals out there showing the way at tricky spots. Nothing though could prevent the clumsy oafs among us from falling over. In a race with over 20,000 steps sooner or later one will not go as planned.

The first leg was up the Clutha River track to Albert Town and was accompanied by happy chatter and stories of other races and racers. For most it wasn’t a race at all but an event pitting ones self against time, distance, gravity and temperature, in one the most majestic places on earth.

We ambled through a sleeping Albert Town and up over Mount Iron, which Terry described as “not a climb at all, just a non-flat bit”. The foreshore in Wanaka was tranquil and the lake glassy smooth, as it awaited the Ruby Island swimming eventers to disturb its serenity. Some of those were already sitting on the beach waiting for the sunrise.

It was daylight when I arrived at the Roy’s Peak car park where the second transition and aid station was.  Here there were more hardy souls out helping the lunatic fringe.  I had long since seen the headlights of the leaders zig-zagging their way up the track like frenetic glowworms. I was happy in my space and didn’t envy them.

It was time to get the poles out and start some serious stuff. I told my crew I would be 4.5 hours doing the next leg, and so it was. It was now 3.5 hours from the start and we had sorted ourselves out.  I saw almost no other competitors during this leg. I contented myself chatting to young German tourists who were climbing Roy’s Peak – a certain amount of camaraderie that bridges nationality and race is always had with people found in such places.

The sunrise itself was stunningly beautiful but only partly masked the fearsome blast of heat that would come with it. I enjoyed Roy’s Peak and the traverse to Mt Alpha.  This piece requires full concentration and there are a few places you wouldn’t want to fall (Terry had said if anyone died, they would be disqualified). 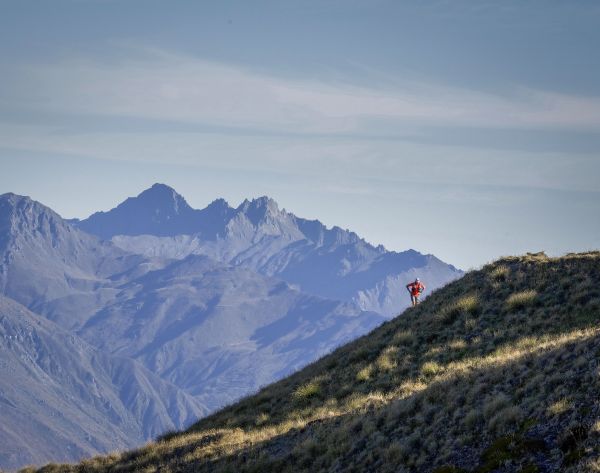 The long haul down off Alpha and into Spotts Creek seemed to go on for ever but I was in no hurry because I could see the shimmering heat waves dancing on the sun-baked slopes of Little Criffel across the Cardrona Valley.  A runner came from behind and said “I’m glad that’s the worst of it over.” I pointed at the monster crouching across the valley and said “I’m afraid it’s not”.  I suspect he didn’t believe me but I caught up on him later on the top of Little Criffel and he said “that was the most brutal thing I’ve ever done.”

The aid station at the Cardrona Road was great and just before we reached it we went through a field with K-Line irrigation going.  That was bliss on a pipe but the bliss was tinged with impending doom for those of us that had been there before.  Grant aka “mountain goat” Guise had all the ingredients there for a good aid station. He knows what nutty people like, he’s one himself and his wife Jane was out battling the elements too. My own crew was there too and they even had shade sorted. There’s some great people around.

The climb up Little Criffel is not my best memory and I’ve largely blanked it out. The ‘little’ part is from the same page as Ultra ‘Easy’ - it’s 1340 metres high, requiring a climb of 1,000m from the valley floor. One redeeming feature of it is the Little Criffel Creek and it reached out like Ulysses’ Sirens and beckoned us into its cool rocks. But the trouble with rocks is that you can’t always get back off them! The aid station at the top of Little Criffel had ice blocks. Ice blocks!? Yes ice blocks! Kept cool by some of the tons of ice that Terry arranged. I had to restrain myself from slight hysteria at this point.

The next section was called the Proving Ground. Apt. This year the last transition was at the Snow Farm and that was also the last chance to do the sensible thing and pull out.  Only 30kms to go. Just Pisa (2000 mtrs) still to climb, then a long gentle drop to Luggate – yeah, right! During the climb up there a mini dust tornado snatched my treasured Southern Trail Runners hat and dropped it 200 metres up the slope.  That only cost me 10 minutes and another attack of cramp. Oh, didn’t I mention the cramp? That happened on the Little Criffel climb so I’ve forgotten about it, sorry. The aid station on Pisa (probably the highest one in NZ) was as welcome as the others. By then the aider had gone but not the aid - Coke, water, Tailwind, jelly beans. Now it was just a matter of the 20km of easy down hill. Ha.

Rough under foot, white powder dust blowing in my sun-shrivelled eyes. I was carried on by the thought that I was going to nail this. Yet another aid station and a kindly soul with goodies. A juicy nectarine sliding over the parched tonsils, unforgettable. “10kms? Nah, more like 12”

The darkness descended with a kind of relief.  It wasn’t cool but it was friendly, and anyway, I was going to nail it. The white powder dust made it very hard to see the washed out parts of the track.  Finally I reached the flat at Luggate Creek and another Southern Trail Runner hat loomed out of the dark.  Renee had come to welcome me home. There was Terry, still smiling his Terry smile. I didn’t punch him.  I’d nailed it!

There are some great people out there, but you have to take part in these things to find them, and find them at their best!!

Photos by Sean Beale, Sweatband Photography - please give his Facebook Page a like - he does great work capturing some wonderful images. And to see more of his Ultra Easy photos click here.