Now I have been in some noisy places,but that bus ride to the boat pickup was noisier than a mob of cows and calves at weaning. It reminded me why I don’t go to town much. I was sure keen to get off there and into the bush!

It was fairly obvious there was something up at the boat ramp when the wave before us was still on the jetty and there wasn’t a boat in sight, but it was great entertainment imagining the ride to the start line on the back of a jet ski…a water taxi it was, and what a great bloke the skipper was. Once we were out of the 5 knot limit we were up on the plain and away like a robber’s dog, only to have the powerboat fishtailing past minutes later…now they were having a ride!

Up the gang plank and onto the jetty and we were away. What a trail, it was awesome. I fell over in the first 5 min as is usual, but it was good to get it out of the way. I landed on my knees in a praying like pose which was quite appropriate for the occasion I thought and made a change from my customary rolly polly technique that I have mastered.

The fear of God had been put into me about the “big hill” after the start. Well, it was a bit like when the boss tells you to watch out for the cranky bull in the yard….turns out he’s a pussy and it’s only the boss he doesn’t like! The track was fantastic and mostly runnable, the scenery was spot on and to stand aside for the milers coming through was epic (took me quite some time to figure out how some of them seemed to know my name… did I have it plastered across my forehead or something?…duh…lightbulb moment…its written on the front of your race bib you clown).

I even had a hug with a famous bloke I recognised from the telly sporting a great beard and rocking a pink tutu…cheers Clive! I also said “gidday” to the tattoo-sporting, kilt-wearing Hamish who has helped me with sorting my fuelling for such an occasion…thanks Hamish. There were random hugs and high fives everywhere with encouragement galore and buckets of squaddie love…you guys all rock! I was feeling like a box of fluffies on steroids…life was good!

The first major dilemma was the small creek crossing…wet feet or dry?...for God’s sake girl, you’re a farmer…so wet feet it was!

The climb up to the Buried Village knocked the stuffing out of my sails and I convinced myself it would be all good to walk if I had to…so I did…I mean come on…I know you get there faster if you run but sometimes you just got to do what you got to do…and those young fellas who had passed me earlier had ground to a walk!

Having never had the honour of arriving at an aid station before, I was blown away by how helpful and enthusiastic all the volunteers were…they couldn’t do enough for you…it reminded me of the frantically waving tail and joyful smile of a favourite dog when it hadn’t seen you for 5 minutes. All the tucker they put out for you to graze on would be a smorgasbord of delight to a cow on rations during a drought and have her chewing her cud in contentment!

It was good to see hubby and have a quick chat and refill water bottles. I gave him an update on the state of the body (everything seemed to still be in working order) and estimated time into Blue Lake. I loved how they cheer you into an aid station and cheer you out…everyone was so damn friendly!

The marshal was quite apologetic about the 2k of road after the Buried Village aid station, but it could have been worse, at least you could run on the grass verge.  It wasn’t any steeper than our drive, so I just “shoved it in the low box and chugged on up”. I had a little celebratory cheer at the 25k mark…until I realised that at the speed I was going I wasn’t going to have any change left out of seven hours…oh well…you get that on big jobs…just shut up and run! 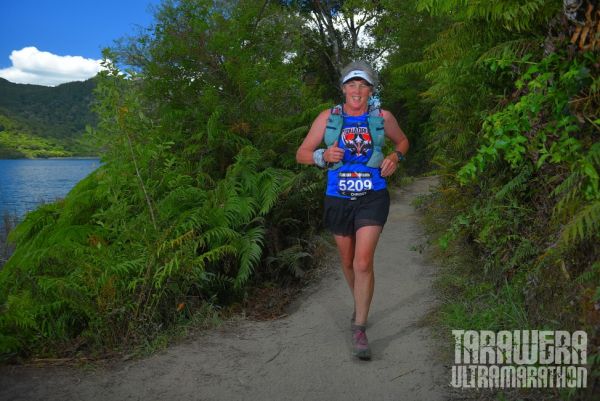 The trails around the lake were superb…oh for a sneaky dip in that water…keep your mind on the job Weeks! I was starting to feel the jarring on the downhill sections of forestry road, but going up was still all good...the “low range box” was still in working order. I was pretty pleased to come into the Green Lake aid station as I had just finished my last fluids…perfect timing. Those wet sponges were “The Bomb”. Now I know how the dog feels when he’s been chasing cattle around in the heat and jumps in the trough to cool off…magic!  With bottles refilled and a gob fill of banana I was Hot to Trot!

I was still managing to chug up most of the inclines…if it wasn’t steeper than our drive then I was keen to give it a crack. It was the downhill that was causing me some concern…I wasn’t quite in the “hurt locker” but by my crude calculations, it wasn’t far away.

The Blue Lake aid station was a welcome relief from sorrowful “woe be me” thoughts about how far there was still to go when everything was starting to hurt. Ma and Pa were there for a hug and hubby was his usual awesome self… “just get on with it girl, shut up and run!” I probably shouldn’t have told him about that mantra as he’s  going to use it on me all the time now, hahaha. With fluids from my drop bag and another gob full of banana I once again chugged out into the unknown, then suddenly out of seemingly nowhere, a huge booming voice is telling me how awesome I am and how well I’m going and did she mention how awesome I was?! Is that the most supportive, enthusiastic aid station marshal you have ever heard or what? Give that lady a medal!

That long white forestry road…did I mention how long it was?…well it was in my head anyway…flat, hard and very runnable…or should I say sufffer-able. My watch had died at the last aid station so I couldn’t amuse myself calculating pace, speed, ETA and all that other nerdy stuff. Then out of the shimmering haze appear two angels in disguise offering nectar from the gods…yup…a spray down with water…legends…they need a medal too!

Man I was happy to get my sorry arse off that road. Yippee down the track…Yeeha across the bridge… then “what the hell?” (that’s a way nicer word than what I was actually thinking)…stairs!.. come on…you have got to be kidding me?!…if that marshall hadn’t been there I would have practised some of my “yelling at the dog language” (which one of our neighbours across the hills assured me one day that I was rather good at!)…and then I got the giggles ‘cause my legs were not co-operating with having to lift that high…Interesting! I seemed to get a new lease of life climbing up the Pa track. Where there is up there has to be down righ? It was softer underfoot and I had visions of steaming down the other side and breezing into the aid station, but nobody told my legs the plan. Brain and legs were having an argument. They were not talking and in different corners sulking. I got turned down “as you do” and had another fit of giggles thinking it should be called “as you don’t” seeing as I was in a “I don’t want to be here” frame of mind!. Have you ever tried to hurry an old cow with sore feet down a hill…it just ain’t going to happen!

I topped up my fluids at Redwoods and stuffed in more bananas…hell I should have been swinging through the trees with all those bananas! At this point my legs were like “sorry girl we are done – you’re on your own now!”… but my brain was like “it was your stupid idea to do this, figure it out for yourself. They are your legs -  you get the bloody things working! How the hell are you gonna be able to do weaning on Monday when you are all seized up and gone to the pack!”…Shut up and run, shut up and just bloody run! 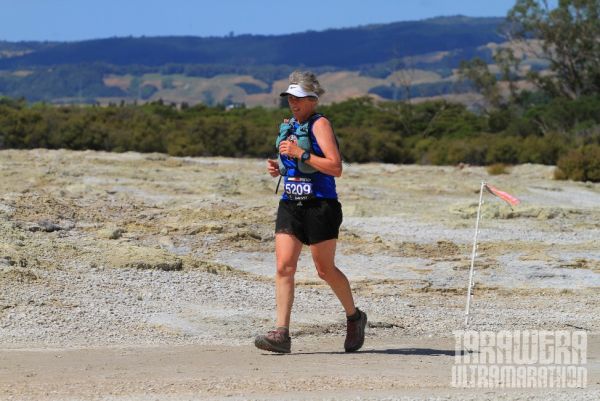 The gauntlet through the stinky sulphur beds was tough. My legs won out for a minute and I walked …rather smell a yard full of steaming cow pats on a cold morning than that stench…that was good enough reason to get running again though…get away from the smell!

I got my shit together for the last km and sucked it all up for the finish. Done! 7hrs 16min. 22months of training for mostly a fun and entertaining day out! I don’t recall reading anywhere in the brief about walking like you’ve been riding a horse for a week afterwards. 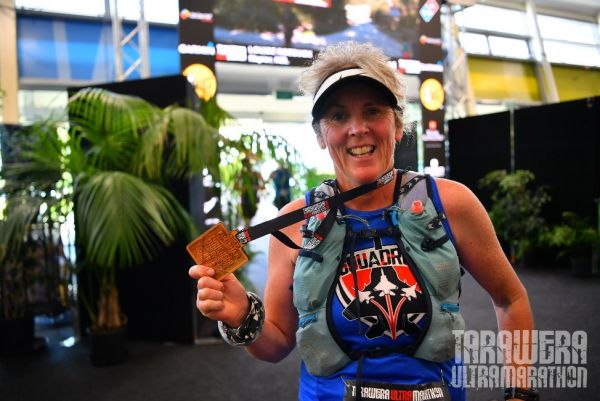 A huge thanks to the WILDTHINGS team for the free entry I won. #itpaystobeVIP

Thanks also to Kerry and Ali at SQUADRUN for the awesome training plan that can fit in around a busy faming life.

And to Hamish at HAMISH JOHNSTONE NUTRITION for his guidance with fuelling for training, racing and healthy eating in general…(I don’t think eating lots of bananas was in the plan Hamish...hehehe… but I got the fluids down perfectly).

Also thanks to my two training buddies that have run 80% of my training runs with me (farm dogs Bub, my pacer and Civic, support crew). And hubby for putting up with me and my running rambling for all these months.

If you had asked me the next morning if I would do it again I would have said “I’d rather ride a bull at the rodeo...its all over in 8 seconds!” But I was walking fine a couple of days later.

See you at Triple Peaks!