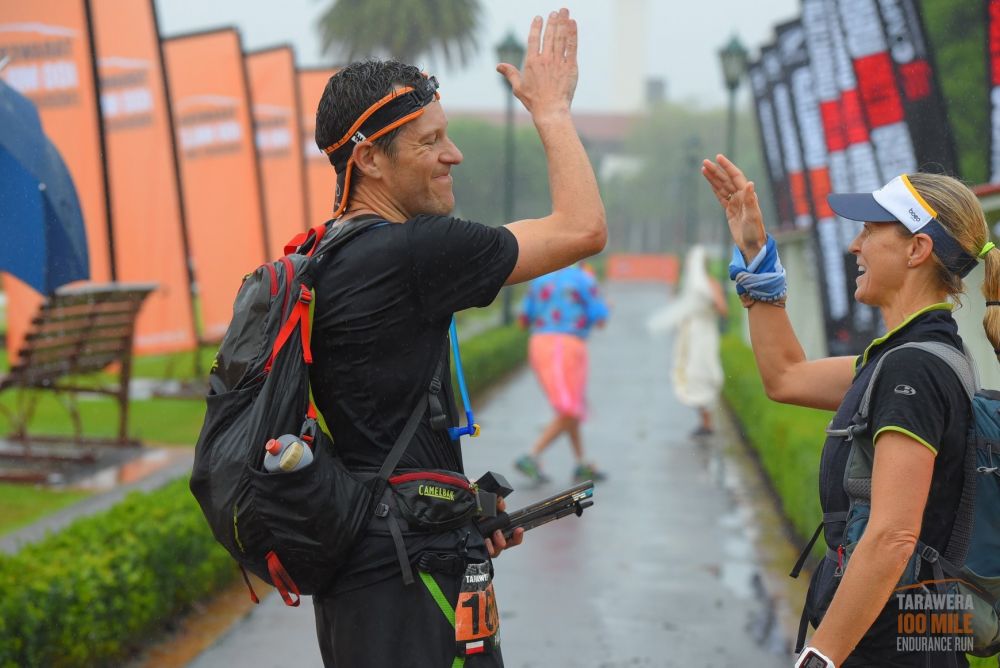 If you ever get asked to be a pacer for someone for their 100 mile ultramarathon run, DO IT!

It is both a privilege and an honour to be a pacer.

Pacing Paulo for his first "MILER" as they say in ultra-speak, has got to be one of my most favourite sporting moments of my life. And I've had many great sporting memories but this one is right up there without a shadow of a doubt!

Pacing Paulo was easy, he is incredibly positive, very capable and unbelievably strong. Not once did I ever doubt his ability to conquer this race. And running 162.2km is not easy! Not by a long shot and most certainly not in the conditions Tarawera Ultra 2018 threw at the runners this year. Luckily by the time I had joined in on the run with Paulo (at the 125km mark) the extremely muddy and non-run-able sections of the race were done with. But we had hills, some mud, rain and of course tired legs and lack of sleep to contend with. But Paulo took all of this in stride and not once did he utter a negative word or thought out loud. There were the odd barely audible groans each time we had to climb yet another steep hill, in which I would simply reply with an understanding, "yep". That was all that needed to be said I reckon.

Being a pacer does not mean you can run for the person or make them run too much faster than their current state allows them and we most certainly cannot take away the general ache and fatigue that sets in a body after moving forward for over 29hours. But I can see the value in having a pacer now that I have been one. Just simply being there no doubt lifts their spirits and gives them the extra belief that they will get to that finish line. I mean, I was headed to the finish line after all, all he could do was follow, right?!

Due to the extremely tough conditions on the trails, Paulo's estimated and predicted times had to be modified quite drastically. He was expecting to be at the Blue Lake aid-station where I was to meet him for the final 36km's around midnight (keep in mind he had started the race at 4am that same morning) but in reality he arrived nearly 3hrs later into the next day!!  But both Charlotte (his best supporter) and I happily waited for him in the rain and never once did we think he would not make it. And he did make it! Arriving in the pitch black of night at 2:45am. After filling his water bottles, a change of T-shirt and downing a nice hot cup of tea (he is English after all) we were off and ready to finish those final 36km's of his 162.2km's together at 2:55am! What a buzz it was for me to run in the middle of the night! Running on my most favourite trail around the Blue Lake for our first 5km's was just awesome. Paulo was in good spirits, albeit a bit fatigued after having been running for nearly 23hrs at this stage, but he was still moving quickly and using his new carbon-fibre trekking poles like a boss!

He was happy for me to lead. It was helpful for him to not only have the benefit of my headlamp lighting the path but it gave him the chance to switch off his brain and just watch my feet and follow my line. We saw heaps of glow worms in the rock wall on the trail which I had no idea were out there as I have never run this trail in the middle of the night. So cool!

At times Paulo and I would talk about different stuff;  life, running, life, running, but nothing too serious as mostly he was very focused on the task at hand and we wanted to get to that next aid station as quickly as possible which was 21km away. That's an incredibly long stretch especially in the middle of the night. The friendly volunteers along the course were nice to see even just to hear them say, "well done runner!". 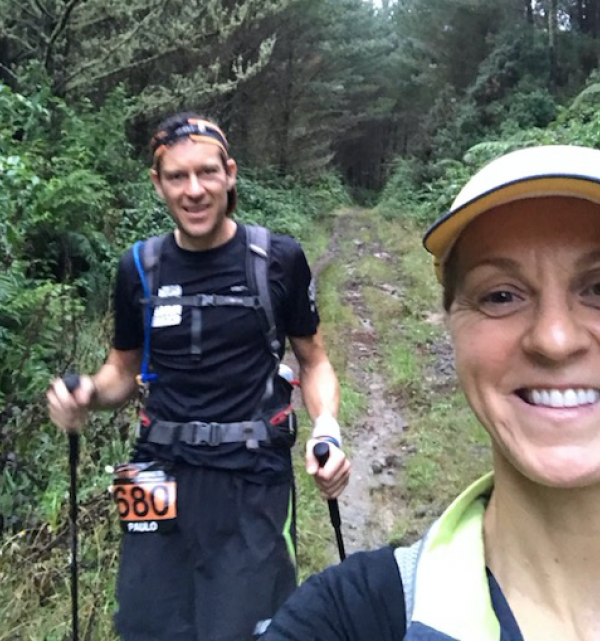 We had discussed how he would like to get in under 30 hours if possible. About 3hrs into our run/walk, achieving that goal seemed a bit tight. But as the kilometres ticked by he seemed to be getting stronger and quicker. Which he was, my Garmin stats tells us so. And when we had about 6km's to go and we were nearing the final aid-station in the Redwoods, Paulo said to me, "I'm not going to stop at the next aid-station, I'm going to carry-on straight to the finish!" And like a dutiful servant I was obliging! Who cares that I needed to go pee, I've held my pee in for longer in the past! Ha! And I did more than that, inside I was doing back-flips of goose-bump causing joy! I was like, this man has just been running for close to 29 hours and he is going to practically sprint the final 6km's like it was the final k's of a 42km Rotorua marathon. I was in awe at his grit and tenacity to achieve his goal. But not only were we going to get in under 30 hours, heck no, he was going to blow that out of the water; he was going to get in under 29.5 hours! Wow! I also quickly got my phone out of my backpack and out of the protective rain-cover (had I mentioned it had practically been raining non-stop for the past two days?!) and as I was still running, I rang Charlotte who had been back at the motel for the past 6 hours and I exclaimed, "You'd better get to the finish line quickly! We only have 6 kilometres to go and he is running SO FAST! Go get to the finish! We will be there in less than 40 minutes!"

And it was at this exact moment of watching my friend dig deeper than he probably ever has, that inspired me to think, I want a piece of this feeling. I want to dig deep like my friend here. I want to run my first MILER now too! (And that's how it happens folks! Inspiration at it's max up close and personal!)

Those final 6km's to the finish line will probably be the most memorable kilometres of my life. Here was my friend, running so fast and so incredibly strong as I was leading the way through an epic thermal wonderland...he was on my heels and we were flying. I was having a blast! This was so much fun! Running fast IS fun!! But running fast with someone who has just run about 158km's with 4km's left to go is mind-blowing incredible!

Like any good pacer, I had full intention of falling back in the final 50m or so to let Paulo cross the finish line on his own. But just as I had exclaimed to Paulo, "only 4km's to go! You are running so strong mate. You are so fast! Heck, look at your pace!", and almost like he could read my mind, he very matter-of-fact said to me, "we are crossing that finish line together!"

And run over that finish line together we did. It was a blast watching Paulo smiling and giving out high-fives to Charlotte, and to the supporters and spectators through that long and welcoming Tarawera finish chute.

So there you have it! It was an absolute privilege helping get my friend get across the line in 29 hours, 24 minutes and 50 seconds in his first MILER! What a CHAMP!!!

You can also read Paulo's account of his epic run here.