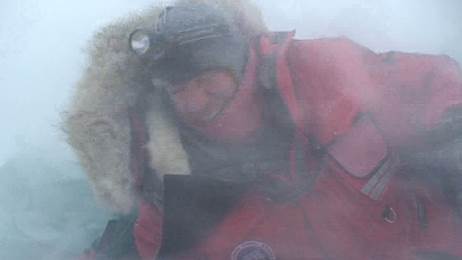 Why do we fear to wear the gear?

I have done over 30 Ultras and with this experience came a certain amount of familiarity that has bred, if not contempt, a dangerous level of casualness. It’s perhaps not surprising that the words casual and casualty are close relatives. I have avoided the odd briefing and yawned at minimum gear lists and insistence by race directors to enforce them. Don’t get me wrong, I’ve always carried the required gear and don’t use it for anything else, but I got a wake up call last weekend that I want to share.

Having walked the Ultra Easy 107km race twice before and really appreciating the helpers and volunteers, I decided to help out myself this year.

A grizzled veteran of the first Ultra Easy told me it was the hardest race he had ever done (and he’s done a lot.) This attracted me and I applied (they don’t just take anyone.) It’s 107 kms forward and 4,700 metres of vertical (Mt Cook is 3,724) – I was the test dummy as to whether a walker could (or should) do it inside the cut-off time of 20hrs. I did it in 18.5 hrs (a victory for the walking community).

I said to Terry (the race director) that I was available for anything he needed on Saturday so he put me in as the race sweeper (the person who moves behind the field at the speed of the cut-off times and helps those who are struggling or encourages them to pull out). The race director should be able to rely on the sweeper that no-one has been left behind.  Having often been the person at the back of the field myself dreading the sound of the sweeper coming up behind me, I thought it would be funny to be known as the ‘Grim Sweeper’. This joke was to backfire spectacularly when an ice storm smashed through the stragglers at the back of the field on the top of Mt Pisa. Nothing in my 50 odd years of outdoor pursuits had prepared me for the mind numbing cold and demonic ferocity of the wind which was dashing standing people to the ground and tearing bits of their clothing off.

For the last 30kms I was sweeping with a 4X4 two seater mule just in case anyone needed picked up. The mule had hip high side doors and a Perspex front windscreen but occupants were otherwise exposed. All afternoon we could see the cloud racing across the top of Pisa and had heard reports of high winds but with reasonable visibility and conditions for such an inhospitable place. Because of this though we lectured the runners at the back of the field about ensuring they had the right gear and that they put it on sooner rather than later if things turned nasty. The last two in the field quipped that they were from Ireland and knew all about shitty weather. It may well have been that they did, but Mt Pisa is roughly twice as high as Carrauntoohil (Ireland’s highest peak) and they were about to get a taste of shitty weather, NZ style.

I caught up on the last of these as he was putting on his jacket – he had walked over an exposed brow and retreated back into the shelter to get his gear out – he asked if I was pulling him out and said “No, you still have time, I’m just making sure you’re ok.”

I gave him 20 minutes, using that time to put on some of my own layers, then I drove up into the teeth of the wind myself. I could hear the wind baying like a rabid wolf but even I was shocked at the force. I thought, ‘how is anybody still on their feet in this?’ Turned out they weren’t. When I found my Irishman he had reached Sally’s Pinch, a ridge of land between a cliff and a hard place bridging the second highest peak and Pisa itself. I was wondering how much the mule would take of this before it was flipped over by the wind and there was only room for two rolls before the cliff. He was lying prone behind a small reef, clinging on with the fingers of desperation. He looked shattered, like he couldn’t believe what was happening. When he saw the mule and felt the slight relief from the wind it afforded, he scrambled up into the cab. There was no use talking because nothing could be heard but his eyes conveyed the feeling that he just might live to run another day. I though had the sick feeling that we were both in big trouble.  I was so cold I was struggling to think and my hands were almost useless on a steering wheel that needed assurance and precision. In what is arguably one of NZ’s most beautiful and spectacular places (no-one who’s been there would argue that Pisa does spectacular well) the beauty was hidden by 20 metre visibility and the wind was a howling and slavering beast with teeth of ice. We made it onto the cut track leading up to the summit and while still exposed we could now take being flipped over without going over the edge of the abyss.

Then unbelievably, out of the driven mist, ice and gravel, came Emily who was a fellow marshal and had been riding her bike over the top. She looked shattered too and as we watched she was thrown to the ground, bike and all. She’s made of stern stuff is Emily and she scrambled up only to be smashed over again. Her legs were bleeding but she was keeping a firm grip on the bike. She looked like I felt, that rational thought was becoming more and more difficult. A lesser person, I’m pretty certain, would not have made it. Spoken communication was out of the question, other than wild eyes and frozen finger pointing, but we got her bike on board and Irish held it there while Emily climbed in to be a third person in a space made for two. We couldn’t turn back and I didn’t think we would make it across Sally’s Pinch anyway so we carried on up onto the open tops of Pisa.  We found out for ourselves why nothing grows up there. ‘Windscreen’ is a comforting word and so it had been until a particularly tempestuous lash of storm caused the top quarter of it in implode in our faces, adding another blow to the face of survival.

The cold was relentless and multiplied by wind-chill was sapping my strength and survival instinct. I could feel the deadly hand of lethargy infusing my bones. I did feel though, a responsibility for the other two, so on we drove with me looking out the door because the screen was opaque. As we neared the top, I saw through bloodshot and gravel peppered eyes the double cab ute that had been the Mt Pisa aid station. It was a beacon of salvation shining out into the turbulent seas of our existence. The trauma numbed faces of my fellow survivors registered the same thought. “Maybe we will survive this after all”. And we did!!

The battle wasn’t over. Such a storm doesn’t relinquish its victims easily, but meeting up with reinforcements in the form of a mobile warm place changed the whole course of the war.

You could say we were lucky but we were also unlucky to catch a storm like that.  Irish summed it up for me when he said “There I was lying on the ground hanging on to that rock – and I thought ‘what happened to the luck of the Irish?’ and then you showed up on that wee buggy and I thought – ah, there we are now” 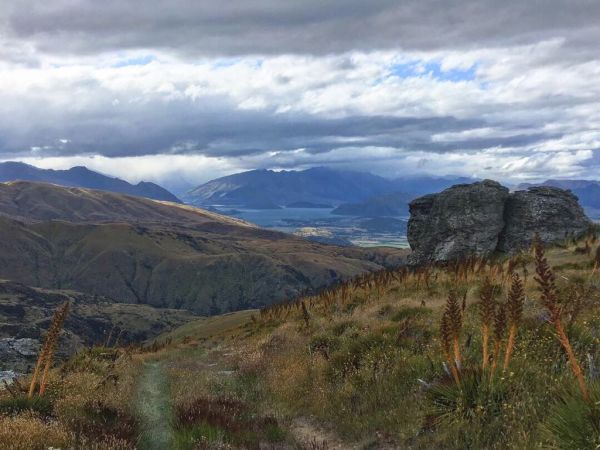 The view from about half way down the 20k long final descent into Luggate. You can't see the wind but it WAS there! Photo: Jo Bailey