All photos by Photos 4 Sale

The Shotover Moonlight Mountain Marathon 2019 was a tough introduction to trail mountain running. I had a rough first 2/3rds of the run but finished strong. Unfortunately, at the finish line my defibrillator shocked me twice unnecessarily. I found myself in the medic tent missing the post-run vibes and my friends finishing. Shortly after I was whisked away in the emergency helicopter to the nearest city Dunedin.

The race had an inaugural Ultra option featuring a whole lot more ridgeline. I signed up immediately. The previous 2 years I had gained a lot more trail and mountain experience and my defibrillator/heart had behaved. I had a great run at the Valley Ultra a few months earlier but had a few niggles since Christmas so hadn't got the training I wanted it.
This helped keep expectations realistic and helped me run within myself the first part of the day. The focus was to:
A) finish and not require the medic tent
B) enjoy the day
C) run well the last 15km or so from moonlight lodge

We Ultra runners set off in the dark up the 4WD road above Moke Creek towards Sefferston. This was the fastest most of us would be moving all day. I covered the first 10km to the stock bridge in just under hour and then the course got real!I The steep climb up to gain the ridgeline of the Point Block strung the lead runners out in front of me - it was great to be able to see all those in front. I think it was the eventual winner who passed several of us here along the fenceline absolutely monstering that climb. Impressive stuff.

We gained the ridgeline and were greeted with the beautiful dawn light catching us and the maze of ridges around us. This ridgeline with the views, the light and the helicopters flying past us ferrying racers to the 42km and 30km startline was a real highlight. I was also grateful to be up on this ridge as early as possible, it was already heating up and my thoughts were with the marathon runners who'd be up here later in the day. 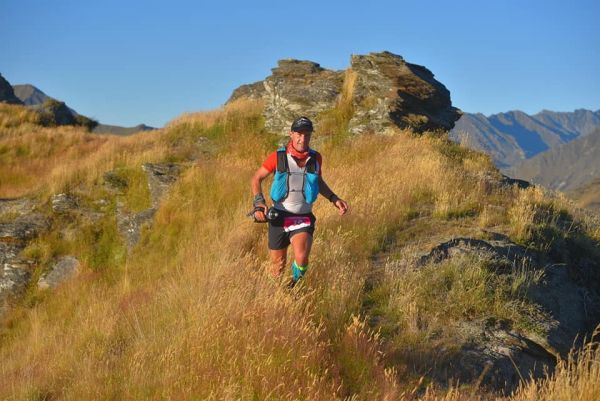 I arrived at the first main aid station at 19km having made good progress and feeling in control. However, this was the first ruh-roh moment. A runner behind me came and went while I stared at the salted potatoes. I couldn't eat! In the end I popped a couple of the potatoes in the front of my vest to nibble on and continued the hike up to the summit of Mt Selwyn 3km away.

The descent down was brutal! It was hot, there was no track and runners were going from marker to marker down steep tussocky slopes. To really burn the legs were a couple of steep pinches and then a plummet down the tussock with plenty of bum sliding to join the trail along the water race and join the 42 and 32km courses.This section since the aid station had taken a lot longer than I had expected and it was now super hot and exposed. I let go of the time goals I might have had and focused on looking after myself. I took a minute to top my bottle up at the water station and took the next section pretty easy, walking all the uphills while trying to drink and nibble.

About 30/31km in we finally had some shade and our first creek crossing. Bliss! Finally got a chance to employ my cooling strategy, pretty much soak my buffs and cap every chance I got for the remainder of the race. One of the other Ultra runners caught me up in this valley and got me moving again. We ran and chatted the easier bits till the top of Death Ridge. Sorry I didn't get his name or see him later, hope he finished well. The Death Ridge downhill was great fun and the scree run down to the river even better. Some of the best scree running you'll ever get, worth doing the 42km or Ultra option for.

A wade through Moonlight Creek, up a ladder next to a waterfall and along some more water races through some remnant forest was much needed relief and another really enjoyable part of the day.
Arriving at Moonlight Lodge the second big aid station a marathon into the race and some 2500m +/- in just over 6 hours I was pretty pleased given the day I'd had. I topped up my bottle but just stared at the food again. Diane, a fellow runner from Christchurch, spotted me here and we caught up briefly. She was halfway through the marathon course and still had to go up on the ridge while I got to follow the 30km runners on the 4WD road the last 15ish km to the finish. I had hoped to be able to run this last section well but I was toast. Sub-optimal nutrition, the scorching heat and the toughness of the course had taken its toll. Added to this the next part of the course was exceptionally barren and had a bit more climbing than I excepted and grades I hate (5-10% range). I was still moving OK downhill and I steadily caught a few 30km and 42km runners. A kind word of encouragement or friendly grimace in sympathy were often all that was exchanged. We were all battling the course.

I got to Sefferstown, an old goldmining settlement and the final aid station at the top of a 20% climb. I wanted to top up my bottle and get through here as fast as possible. The allure of 14 crossings of Moke Creek 2 km downhill was my goal and I felt like runners must be catching me surely. As soon I took some coke in it evacuated itself along with the rest of the contents of my stomach. Bugger! Also Ultra running isn't glamorous! Big thanks to the aid station crew at Sefferstown for sitting me down in the shade and tipping a couple of jugs of cold water over me. Heat stroke was a real risk out there for everyone, massive kudos for looking out for us.

After a few minutes rest I was away again. Hiking up the hill above the aid station before the descent down to the creek. I took my pack off and went for the full body immersion in the deepest spot I could find. Brilliant! The run out was a slower than I hoped but cooling off in every crossing was worth it, I didn't want a repeat of the finish line 2019.

We finished crossing the river with 3km to go and I was pleased to run all of it. Even better, my friends who I'd missed finishing in 2019 had all finished before me and were there to cheer me, along with a bonus hug from the Race Director Antz. 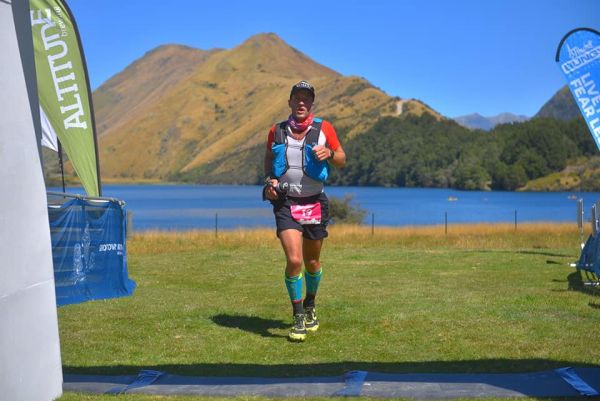 Stoked to finish. Privileged to have been allowed to come back after last time and to be able to run these events in the current climate. Mega kudos to the race organisers, all the volunteers and musterers out there. Well done to everyone who challenged themselves out there, certainly my toughest run to date. 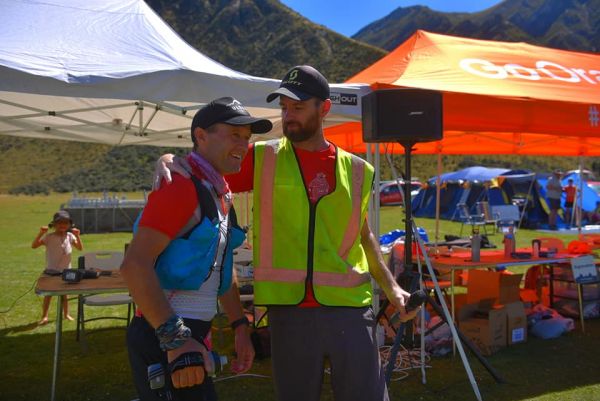