Staying upright at the Riverhead Rampage.

You know you are going to have a great time when the sponsor of the race is a brewery. Kudos to Hallertau for hosting the prize-giving and quenching our post-race thirst with seriously good beers.

But let’s take a step back and start by thanking Wild Things NZ and The Riverhead Rampage team for giving me a free entry a few weeks ago. I was not very aware of this event before and will now make sure to mark it on my 2019 to do list. My 2nd trail event ever was also in the Riverhead forest last year, for the 1st Xterra Auckland race. I didn’t have good trail shoes at the time and spent half of the event on my arse, fuming against my lame shoes (easier to blame the equipment than the runner, aye?). So, let’s just say I was a bit apprehensive before starting the Riverhead Rampage half marathon. I’ve been running in Icebug Mist shoes for the past few months and have a pair of untested Icebug Acceleritas, ready for the mud. I just wasn’t feeling confident enough to try them for the first time during a half marathon. Thankfully, it barely rained the few days before the event and the ground was perfect for the Mist.

Off we went. After about 1km of flat ground, we entered the forest and started the climb. And climbing it does – almost 10k of it! But it was all fine: I was just behind my friend Erwin, sometimes even in front. I guess I was even feeling a bit cocky, going much faster than my usual trail pace on flatter sections. Until, “classic Vivi move” (as my wife says when talking about my clumsiness), my left foot hit a root and I lost my balance, almost falling face down on the track. Back to reality: it was a bit painful, so I decided to just walk a bit. That was the last time I’ll be near Erwin who will finish about 10 min before me.

But that was not the end. Everything we climbed, we had the chance to run down! And that was SO MUCH FUN! That’s also when you realise how different each trail run can be depending on the terrain. Two weeks before, I was running the Gazuntite, and the descents were so painful there: very hard and uneven ground, taking a toll on my knees at every step. But in forest ground, it’s a totally different experience. I got a chance to pass a lot of the people who passed me before. The ground I lost during the ascent, I gained back running downhill. I spent some time not far away from Gareth (Metrorun group) who inspired me to just use some steep sections of the trail as a mudslide – the other FUN part of the day.

I ended up side by side with Gareth at the exit of the forest before the final 750m on the road. That’s when I started accelerating. My fastest pace during a road half marathon is 5:45/km I believe; and somehow, I was able to muster the strength to run this last section at 5:35. It felt so good finishing on a high note! Time for the beers! 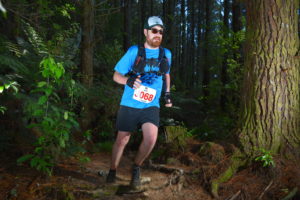 My wife and daughter joined me a few minutes after the finish. Erwin was my driver going to the event and had to leave earlier with his wife and daughter. They were really nice and gave us their drink coupons, so I was able to enjoy two of these delicious beers. Thanks mate!

To conclude: not the hardest event I’ve taken part in, but a really nice one. And what’s more, all the funds collected that day will go to the Riverhead Primary school and help to promote healthy lifestyles.
I’ll definitely be back!