Joining the Dots - the Tarawera 87k

Joining the Dots - the Tarawera 87k 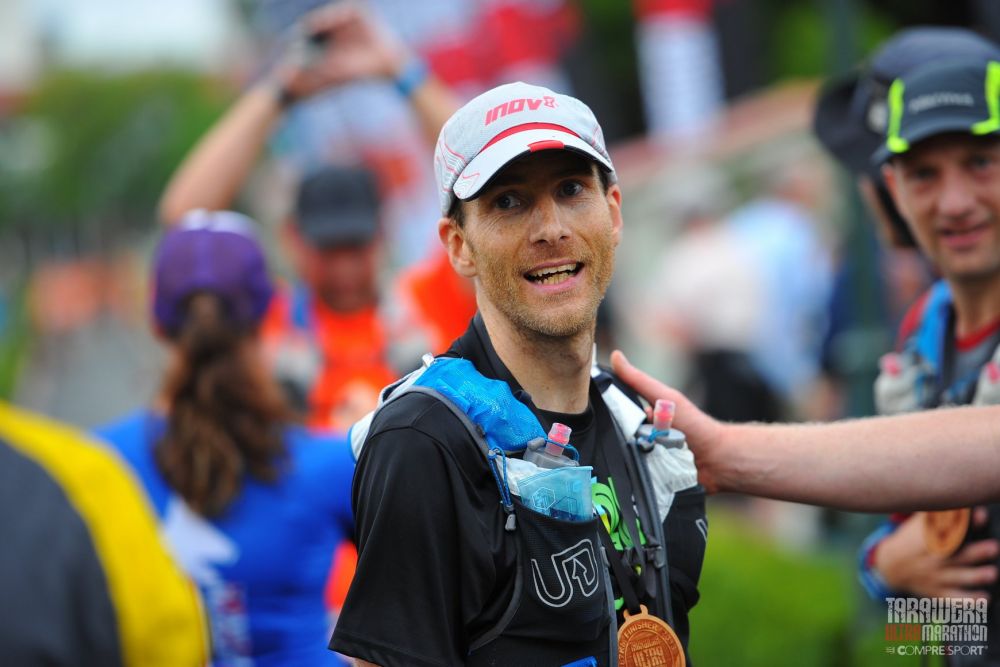 Feeling all the emotions at the finish line. Photo by Photos4Sale

Everyone has a story in ultra-running. There's loads of preparation and training to get to the start line, so you don't just enter them on a whim the day before*. It begins well before race day.

Mine starts 2 1/2 years ago when I clicked on the submit button to enter the Tarawera Ultramarathon 2016 102km option. Six months later, race day arrived. It was a wet and muddy affair, and after a tiring nine hours on the go I struggled with the long fire-road sections and withdrew at 75km - just as the rain was settling in again - by hitching a ride from a passing ute taking used drop-bags to the finish line. Result: DNF (Did Not Finish). I covered the first half of the course though...

I hadn’t intended to go back in 2017 but Ange asked if I'd like to join her in a two-person relay team on the 87k course. It was a hot and sunny day, we ran quite successfully, and I covered the second half of the course...

Last weekend I went back for the 2018 edition, this time in the 87km solo. It was another wet and muddy day. The course was in the opposite direction, but my previous coverage still made some parts usefully familiar. Instead of facing the long straight road sections, exhausted, at the end, it meant I could speed over them from fresh at the start. And rather than dreading the other road sections, I embraced them as I could cover them quicker...and get back onto trails sooner. It was also great fun chasing a ute making its way down a beautifully green mossy rainforest-looking section to the Tarawera Falls aid station. There'd be no getting in it for a ride this time though. 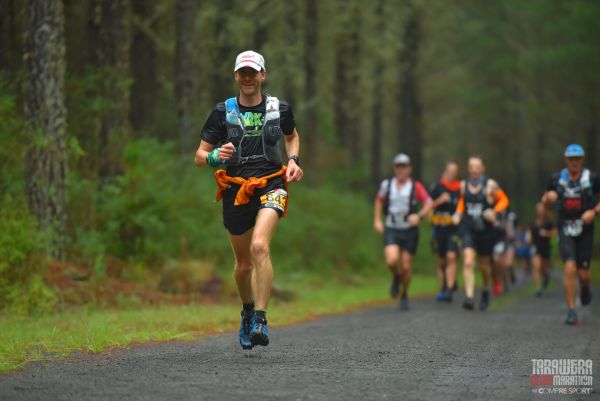 Feeling fresh on the early forest roads. Photo by Photos4Sale.

There I expected to have a drop bag with another pair of shoes, to give myself the option to change out of my wet ones from a stream section early in the race. The wet day being what it was, there was no point, and Brent’s suggestion of the soft-ground shoes I started with would prove excellent for the next sections, so I just wanted to move my bag to the ‘used’ pile so it could get sent to the finish. But much like a blind man in a dark room looking for a black cat that isn’t there (Darwin?), I was looking for my black bag in a dark transport trailer that wasn't there. Turned out the 87k runners didn't get drop bags there - it was at the next aid station, Tarawera Outlet, which I missed completely due to being a detour left and over a bridge and I was directed straight on. I didn’t need the aid station, or the shoes, though, so it was no drama and I carried on.

I'd set up an alert on my watch to remind me to eat every 45 minutes, and I carried nutrition rather than relying solely on the aid stations (lesson from 2016). This was especially important in the two sections of the course where there are 16km (and more than two hours) between stations. The trick is to zone out just enough so that you aren’t looking at your watch the whole time ('can’t believe I’ve only gone 20m, this is going to take forever!') but not so much that you lose focus on the goal. It made a nice surprise when you’d get an alert to eat something and think the last 45 minutes had gone by quickly...it was a nice bonus when the k's had also gone by quickly as well.

Mentally breaking the course down to manageable chunks was also key, including thinking of it as 'only' a 67km run and then having a pacer for the last 20km. Orsolya had kindly offered (or been talked into?) doing this the day before, when we'd jokingly said that if she wasn't there, assume she'd started without me so that I had to catch up! As it happened she, Chan and Dion (who were also crewing for my friend Brent) couldn’t make it due to problems with the buses that crew and spectators needed to use to get around, so I carried on.

I would have liked to have made the most of the descent from 75km-80km, but cramp in various leg muscles started to play a part and I had to keep stopping to stretch them out, worried each time that someone was going to catch up and race past me. I didn't know my placing until well after I'd finished, but at the time I still didn't want to lose on whatever I had.

At the final aid station, it was all flat to the finish and they told everyone it was 5km to go, but with my watching telling me 80km I kept in mind it could as much as 7km due to GPS variability. Before the race I had quietly thought (can you think loudly?) it would be nice to crank out some fast k's to the finish, but strangely the legs weren’t quite so willing after already having done 80-odd so it was just a matter of holding on. I started looking at my watch more often though, not for my time but just to see the distance come down - 3km to go…2.5km...2km... - wondering where exactly the finish would be. I was expecting to have to do a lap around the Rotorua Museum and event centre buildings or something. 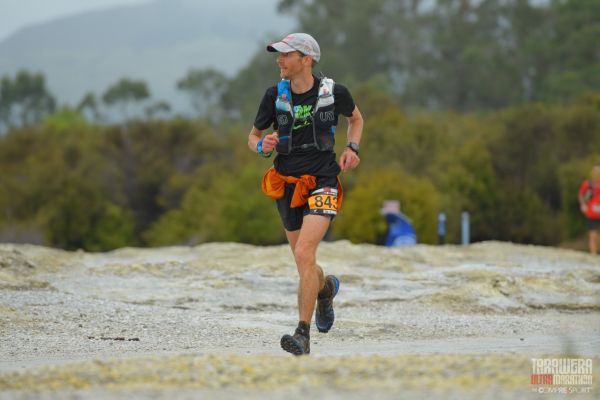 Nearly there! Just 2k to go... Photo by Photos4Sale

Running through the geyser fields, you could see the buildings in the distance over to the right and it was hard having to follow the path when it turned left to lead you away a couple of times, but then it was the 200m-to-go sign and the finishing straight. Across the line. Stop my watch. Get a hug from event director Paul. Quick weigh-in medical check. Some ginger beer and jelly beans. Boom, job done. Result:: 3rd place in 9 hours and 20 minutes. And I remembered to look around at the amazing scenery every so often. 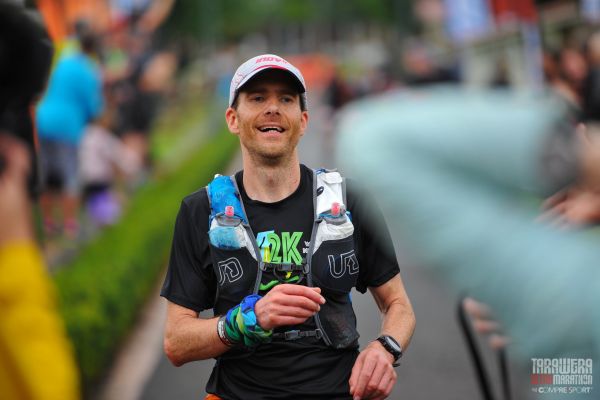 Made it! Photo by Photos4Sale

Lesson 1: Carry food and eat it ('carry it internally!'), consider aid stations an added bonus.
Lesson 2: Don't rely on your drop bags.
Lesson 3: Your pacer may not be able to meet you.
Lesson 4: Carry on!

* Tarawera 42k in November isn't technically an Ultra so I'm not culpable!

Thanks to Paul and Tim and all the volunteers, contractors, and land owners who make this event possible, and Kurt Matthews Photography/Photos4Sale for all the amazing pictures.

Hats off to all the other runners who hit the start lines in all the distance options and braved the elements, the course, and sometimes even their own bodies and minds for as long as they could.

To Gareth for all the WUU2K gear and support, Brent for transport and accommodation, laughs, advice, and anti-cramp measures, Ange for getting me back there last year, Matt for all the great training plans and runs, Orsolya and Chandima for all the good advice and cheering, and Pete for once again giving me the idea and drive that I may be able to place quite well.

That's my story and I'm sticking to it. I tend to over-explain things, so if you made it this far, well done on not DNFing. Thanks for reading! 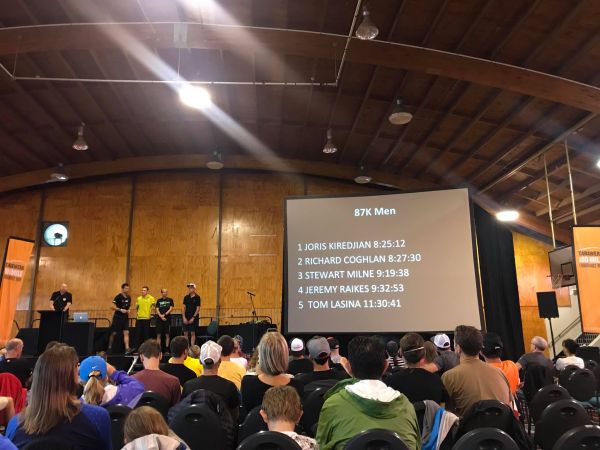 The Tarawera Ultra is a Wild Things Partner Event. See what others had to say about it by reading the Reviews on our Partner Events page.