The best days of our life

The best days of our life 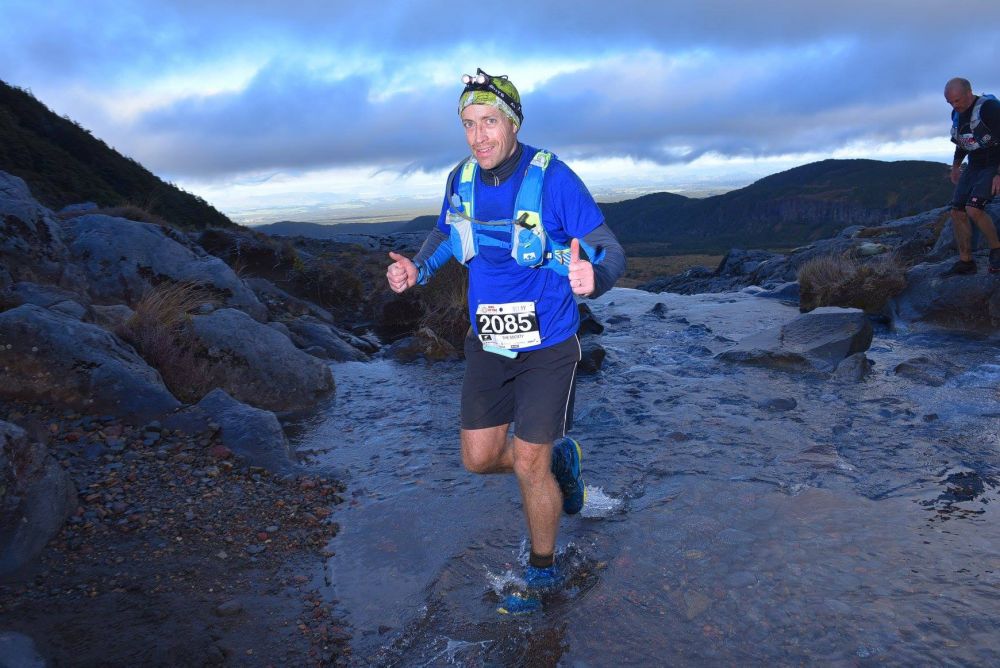 HIGH ON LIFE! PIC BY PHOTOS4SALE

It was my 40th birthday in February. I grew up in England as a teenager in the '90s listening to indie-rock. And of course, that's precisely what I still listen to now! The old familiar songs that you return to, the albums that keep on giving. Sure, I dip into the odd new release in the hope it will satisfy in the same way, but nothing compares to going back to where it all began.

Because it's the memories that these albums invoke that gets the hairs on your neck standing up. Pushing the mix tape in to your first car stereo, before a night out. Or the smoke-filled pubs as a 16 year old. It's all there, tied up in these ballads that endure. Excitement, mischief, recklessness, hope.. the best days of our life

Back to early Feb (as a 39-year old pup) and I held in my hand five wooden medals from the Tarawera series, having just completed the 100km race. A personal milestone. And these medals, like those albums, were dripping with sentimentality; of stupidity, bravery, mistakes, lessons learned and of getting the crap kicked out of you. The Tarawera series was to me, like those enduring albums. My entire running experiences to date, forged by these anthems.

Then there was a new release. A release that made my heart race with the excitement of a teenage boy.

When I heard Jason Cameron (of the Tussock Traverse and The Goat) was teaming up with Paul Charteris and Tim Day (of the Tarawera Ultra and Waitomo Trail Run) to form a rock-star supergroup of trail running royalty, I wanted to play that record.

The Ring of Fire. It sounded edgy as f*ck.

Producing an event as ambitious as circumnavigating Mt Ruapehu was daring, but it also made so much sense. My wife Louisa and our good friend Kate all wanted a piece of it, so entering as a three-person relay team was the obvious way to go.

We discussed who should take which leg, carefully studying the course profile and seeking advice from those who knew the terrain better. Mixed opinions and hyperbole left us going around in circles but we settled on me taking leg one. I'm pretty sure I agreed this before realising it was a 4:00am start!

As the compulsory gear list was released in the weeks leading up to the event, I felt that dawning sense of trepidation. Two thermals, thermal leggings, seam-sealed jacket. survival bag, spare head-torch batteries.. the list went on. I wasn't sure I owned a bag big enough!

The practice pack confirmed this, as I tried to squeeze everything in like stuffing the Christmas turkey. Side pockets that had never been unzipped bulged with vacuum-packed gloves and beanie. Fuel was syphoned into zip-locked bags.

I'd purchased some new Ay-Up headlamps online to make sure I got through the opening couple of hours of darkness stress-free, which arrived in good time. Though whilst I'm convinced I chose manly "electric blue", I opened the package to reveal "hot pink". Oh God

Early April in Rotorua had been pretty mild. I was most certainly still wearing shorts and a tee to work, so it was some surprise when a couple of nights beforehand I got a message come through on my phone: "It was 4 degrees in National Park last night" - hang on, 4 degrees? This is suddenly soundiing like an SAS mission to the sub-arctic.

A couple of cheeky ales and having had the electric blanket on, made sure that when the alarm went off at 2:30am, it was like a punch in the face. I staggered into the kitchen and fetched the quintuple espresso from the fridge that Louisa had brewed me on the hob-top stove the night before. I downed it with a coffee shudder and dry wretch.

At the Chateau, runners flocked inside to escape the bitter cold morning air, but as it hit 3:45am there was no more rest-bite, as we were called to make our way to the start. A great number of familiar faces gave it a real sense of home-from-home. Selfies were exchanged. And we were off.

The race started with a short run up the tarseal before hitting tree-lined single-track that wound for the opening 4-5kms. I could have been in the Redwoods back home in Rotorua with elevated tree roots and drops, tight bends, and the need to drop a shoulder to ease around trees. The opportunity to pass runners here was non-existent. About 40 minutes in to the run and I was probably running 10% slower than I'd have liked; I could see I was about eighth in line, determined by the pace of a single competitor.. beyond them, the pack was breaking away.

We broke into the open and our first river crossing, where the water filled my shoes. The very clear definition of the trail that had gone before was now replaced with an open expanse; a carpet of rocks, as runners broke free and found their own way across the terrain. Poles that stood 8-feet high led the way, with a reflective strip that twinkled and encouraged you towards them.

I found it was easier to run behind someone of broadly similar pace. Keeping my head down and using their heels as my guide, whilst keeping a close eye on where I was immediately planting my feet felt more comfortable than running with my head up, scanning for poles.

By now my body temperature was good, but I could still feel that pinch of coldness on the end of my nose. In the pitch black we hit marshland, with boardwalks. Some of these were easier to run on than others, with neatly arranged planks. Others were more like ladders with precarious gaps which, on tired legs, could easily see you catch the toe-end of a trail shoe.

At one point I planted my foot down a hole and lost my leg up to the waist in swamp water, pulling myself out with a wet glove.

The marshland made way for volcanic rock and the climbs and descents started to become more pronounced.

I latched on to one runner whose footwork was impressive, as he glided over the scoria with seeming ease. "You have a good headlamp" he said. "You keep me honest and I'll keep giving you good light" I replied, my eyes watering with concentration as I tried to keep up. Footwork at this pace and in this light was a gamble, at any moment one mistake could end in a rolled ankle, but with the distance remaining, you have to park those fears and run with confidence.

A couple of hours in, the sky started turning deep blue as the sun rose behind the horizon. I looked back to see headlamps like fairy lights, winding their way in the darkness.

The terrain became more tricky as we hit rutted-out sections of mud. At one point I completely lost footing and fell headfirst down a drop, quickly planting my hands on my head to protect it, but instead ending in thick mud. "You handled that very gracefully" the nearest competitor said graciously, but surely without an ounce of honesty.

The glorious morning light was revealing more of the flora and fauna. Wild flowers grew by the streams that wound their way through the desolate landscape, and I was much more aware of the sound of water around me. 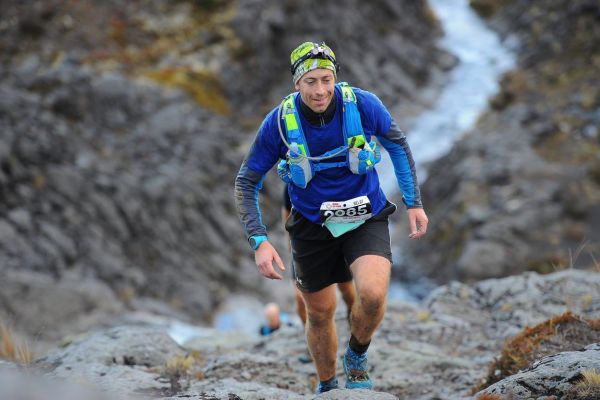 As I passed the first and only DOC hut, I was greeted with the sight of an incredible climb. Strava would later reveal the next 1.5 kilometers had over 250m of vertical ascent, and my legs felt it. Clawing my way up.

I took my phone out my bag to capture this sight; a great Facebook LIVE moment I thought. But I had no connection.

Half way up the climb I was wobbling all over the place. Several people asked if I was ok as I stumbled like a drunk leaving the bar in the early hours. I threw a handful of jelly beans into my mouth and tried to put one foot in front of the other. The first 20km or so had been fine, but all of a sudden I was hit by a fatigue avalanche

At the top of the climb, I checked my phone again and this time I had a connection. My brain was fried, but I thought I'll try this Facebook LIVE idea. I’d never heard of doing anything like this mid-event, and it sounded like a fun idea and excuse to try something I’d never done before.

"Just say how you're feeling and what you can see” I told myself.. as I tried to hold my iPhone steady while running - an attempt that did't end so well! (Ed note: you can watch Rich's video here - watch to the end for a really good giggle!)

Soon I was at the cross-over where the kids, Louisa and Kate met me and I was able to see Kate off and relax myself

From here, the day became all about Strava beacon (and more strong coffee), trying to cross-reference maps from the website, with live positions of our runners. Guessing how they must be feeling and willing them on by shouting at the screen.

Kate smashed leg two, leaving it all out there and arrived back at the house broken. The more I heard about leg two during the day, the more grateful I was that I got leg one. It sounded brutal with 1600m of vert. 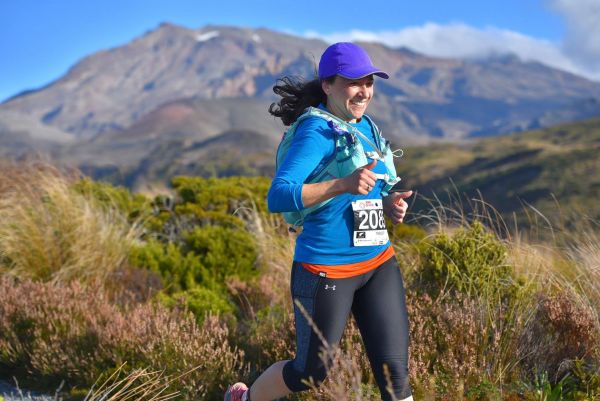 We lost Louisa on beacon for almost the entire third leg.. so we made our way back to the Chateau nice and early. And we're glad we did! Louisa had torn through the leg in under three hours - once again proving she is the better half of Team Barter.

We arrived in time to see her smiling face emerge on the Upper Taranaki Falls Track leading in to Whakapapa.

Finishing together as a group, with five kids in tow, and so many familiar faces embracing us home, was epic. 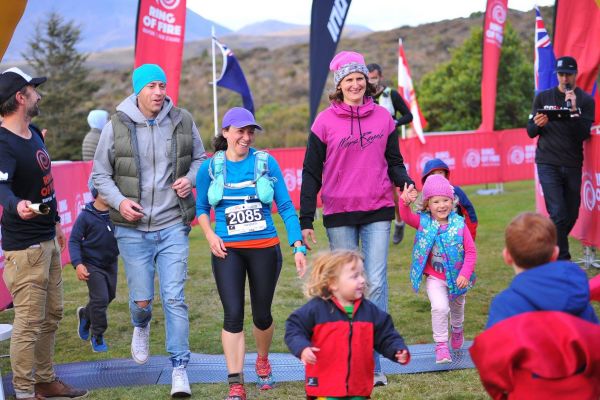 Such a sweet moment! Pic by Photos4Sale

We managed to finish before dark, so missed out on the incredible red carpet that took later competitors into a "ballroom finish" but that didn't matter. We were buzzing. And that buzz stuck.

The next few days were full-emersion as we submitted ourselves to the memories of the event. The tracks we'd each ran, like the tracks of an album we played back on repeat again and again, as we each told stories and remembered moments out there in the wild. Incredible photos from the day started popping up on social media, as did other people’s stories and experiences. Like a bass-line pounding into our consciousness, connecting us all.

The inaugural Ring of Fire will burn long in the memory.

Excitement, mischief, recklessness, hope.. the best days of our life.

Did you run in the inaugural Ring of Fire? If so, then we'd love to hear what you thought of it. Please take a moment to Rate the event and write a quick Review (just a few words will suffice!) here.