I always knew this was going to be tough. I knew The Goat Tongariro was tough, and that was just the first section of the Ring of Fire. What I totally underestimated wasn't just how hard it would be to do in the dark, but how the second section, The Missing Link would challenge every fibre of my existence.

So, Monday of race week, a sniffle. Again. Third race in 6 months, a sniffle on the Monday of every event. Please, why? What a perfect start. Actually, let's back-track even further: January - the last physio appointment on a torn hamstring: being informed the issue is sciatic. Champion. I've the Tarawera Ultramarathon 87K the following week. It didn't bode well.

Fast forward to several weeks out from the Ring of Fire: Sciatic issue not under control. Plateaud on "tight" but not abated. One week out from race week: Last run, a shortened 15K run. Then nothing. Berated by a massage therapist beforehand for not getting deep tissue enough (agreed), the 15K run, then nothing. Absolutely resting it and one last deep tissue just before race day. I'd be lying if I said the sciatic issue was resolved. It wasn't.

So race day. A nice early 2:30 start (yes, 0230 hours). Breakfast, then, due to "sniffle" an immediate sense of nausea. Oh yeah, just like the Tarawera Trail Marathon and 50km in November, where I couldn't even eat from that sniffle. Huzzah for Deja-vu! Anyway this time I got my brekkie in. Progress...?

Here's how the race panned out:
0.00 to 6.00KM:  Setting off in the first wave at 3:55 (yes, 0355 hours) and 500 meters into the "72K" course my sciatic issue announced itself - What an awesome start, meaning it was going to be a long day. However the trails were runnable, even in the dark, and it got me thinking "OK where's the really technical bit?" About the same time, someone behind me called out this query too. Oh how I could have laughed looking back, if I'd have had the energy to do so.

Then, a few metres later was the realisation: "Oh, here's the technical bit..." which proceeded to get considerably more tricky as time and distance went on, and it was almost unrelenting but for the occasional respite resulting in slow progress through scaling rocks, trenches, etc, in the dark for the first 2.5 hours. During that time I realised I was not a very good way-finder. Suffice to say I was rubbish at it, and frequently found myself running through undergrowth while other passed me a metre on either side, running on trails. I also realised I wasn't the most sturdy of mountain goats, failing on all but one river crossing to not actually put my feet in the river in place of the drier stepping stones route. When you don't even bother trying to find stepping stones any more! Pic by Photos4Sale

But then the sun rose and the whole experience changed to one of immense joy, finding myself in a place of spectacular beauty - I guess this is why it's a double UNESCO heritage site. Except for the fact that I'd taken 4 hours 15 of feeling like I was going to vomit and only covering about 23 kilometers in the process. Note: I've never run so slow over that distance before, it would have been demoralising had it not been such an incredible course. So I'd gone over 4 hours feeling  nauseas, likely to to vomit, and not able to take in any nutrition of note, other than two different flavours of Tailwind Nutrition in my Orange Mud water bottles, while handing out my cramp spray to the poor souls who suffered it on this first leg, though at the same time worrying if there'd be any left should I need it, as I usually do. 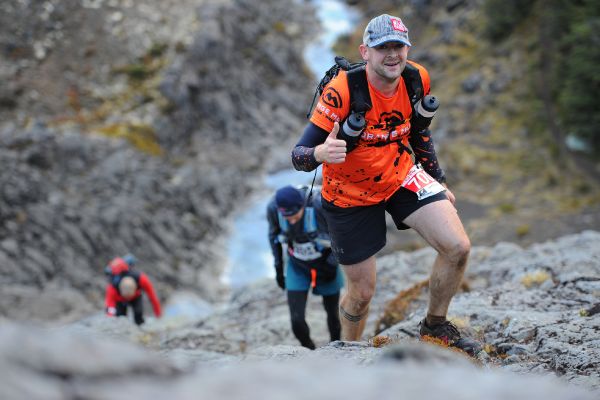 But I had formulated a plan through this nausea: One of the ingredients of sugary soft drinks is an antiemetic - something designed to stop you vomiting due to the sheer volume of sugar that your body would normally eject - genius (or so I thought). So I drank some Coca-Cola, hoping the phosphoric acid aspect of it would stop me feeling sick. It would also have the added benefit of getting a whole load of energy and caffeine into me at the same time to help me get through the next section. Today, this approach was a significant fail. a fail that horrified bystanders and probably didn't help other runners. Instant ejection of everything in my stomach. Twice. Marvellous - only 50Ks to go and I've just had mass evacuation. Still, it could be worse I guess, and a lesson I've learnt from Tarawera Ultramarathon 3rd placed mate from a few years ago is that you can finish 3rd (and 1st in age group) after hurling your guts up from 80-100K. Vomiting isn't an excuse to stop. Ultra-running is a classy business right.

Immediately after this nutritional exodus there was a long runnable downhill section. Hurrah as I could run properly for up to 4 kilometres. And so I set off, knowing that the next aid station, and the only place after this undesignated "vom-stop" was another 25ish Kilometres away. Might as well keep going. I've food on me so hopefully I can eat it at some point in the near future. However two kilometres into the downhill, unsurprisingly, my stomach became "somewhat unimpressed" at the situation, resulting in an immediate slowdown, back to almost a walk before hitting some really nice trails. Oh how those runnable trails were not going to last!

Boulders, boulder fields, more boulders, hard to navigate down skeet/shale sections, hard to climb up skeet/shale sections, and getting slightly lost in some kind of non-comedy deja-vu/Scooby Doo style repeat sequence, but rather than pictures that Scoob and the gang ran past, it was bouncing one-person-at-a-time hard to cross bridges in some abyss of boulder and desert hell. But it wasn't all doom and gloom. On one climb I got a tiny bit of cramp. This was about 7 hours into a gruelling slog, and so is a significant improvement for me. Hurrah for hydrating properly and Tailwind. It was also a deeply satisfying moment watching others struggle in the wind and sideways rain to think "Hurrah for training in Wellington". That's two hurrah's in one huge amount of bleak, boulder filled abyss. The other respite in Boulder Abyss was in the form of others, the odd conversation with a Tarawera Miler here, a Wellington Scottish Athletics Club person there, and starting to feel ever so slightly better, when...

BAM: A rock. Someone put a rock under my feet right when I wasn't looking. And I flew, though sadly not far enough to make up much ground. Thankfully a good soul from one of the Wellington social running groups "The Washed Up Jogging Club" stopped to check I was OK. slight cut to the hand, slight knock to the knee, somewhat bruised ego, but relief that there was a new pain for my brain to focus on. This is at about the 40 kilometre point, so "only" another 34 to go. The numbers were falling away though the use of profanities was high. I was in good company.

Then something magical happened: Around the 45 Kilometre point I started to feel OK. And surprisingly I'd not had any repeat cramp issues. This. Was. Rare. It was also approaching the end of the boulder field, and I was able to eat something for the first time - a bliss ball and a jelly sweet, though I was running out of water and Tailwind Nutrition.Thankfully was approaching a DOC Hut, the Rangipo Hut in the middle of the Rangipo Desert where I was able to fill up with water again, and immediately felt great. So I ran, and it was for pretty much the first time in ages. And it felt glorious, so glorious I got through to the next aid station, topped up my water, had some more coke (this time it actually stayed in) and immediately carried on running, right up until the very last DOC hut on the course to refill my water.

And here, the second wind... ended.

But now for the first time that day, there was the prospect of finishing the course in daylight, my target after the "just finishing it" target. And so a run/shuffle/walk situation continued until about the 7 kilometres to go point, cruelly marked with a "hilarious" 5K to the Finish sign . I didn't care that it was 7, not 5, I found the third and final wind needed to carry me home, fuelled by a desire to go back to bed, and the sight of the finish line, the Chateau Tongariro,  for the first time since 4AM that morning, which was fast approaching some 14 hours ago. I was going to scrape into the daylight section of medals, not the "Gold Standard", but then next best thing, and nothing was going to stop me. I even made sure there was no falls, like I did at a similar point in Tarawera in February, though I came close once or twice.

And then there was the last photographer, followed by the "1K to go", "500 metres to go" and then bumping into Will after he'd finished the 50K course and forcing me to be video'd all the way back in and over the line.

DONE. Beer. Recover, and then get ready for the party in the ballroom later, to watch all those finishing after sundown who had to run a little further: into the Chateau's ballroom, and along a red carpet, under a chandelier to the finish - not a bad way to finish an Ultra! Pic

So it was 14 hours, 5 minutes of a course that went:
Section 1 - The Goat: Unbelievably hard
Section 2 - The Missing Link: Even harder (mentally)
Section 3 - The Tussock Traverse: Would have been glorious but for Sections 1 and 2.

This was the most mentally taxing and physically challenging ultra to date. The ultra I've learnt more about doing ultras on than any other course. It nearly beat me multiple times. My guts nearly beat me, some rocks nearly beat me, the dust of the Ragipo desert nearly beat me, but in the end I did it, I beat the course, and just in daylight hours. Boom! It's Over! Ultra #7 complete. Pic by Photos4Sale

True to cliche, during parts of the race I was thinking "never again", but then towards the end of Section 3, I started processing what I'd been through, the sheer amount of learning, and indeed what I'd do differently next time to improve, and hopefully hit Gold Standard next time!

This story first appeared on James's own blog site, Goodwill Runs. Thanks to James for sharing it with the Wild Things community

Did you run in the inaugural Ring of Fire? If so, then we'd love to hear what you thought of it. Please take a moment to Rate the event and write a quick Review (just a few words will suffice!) here.