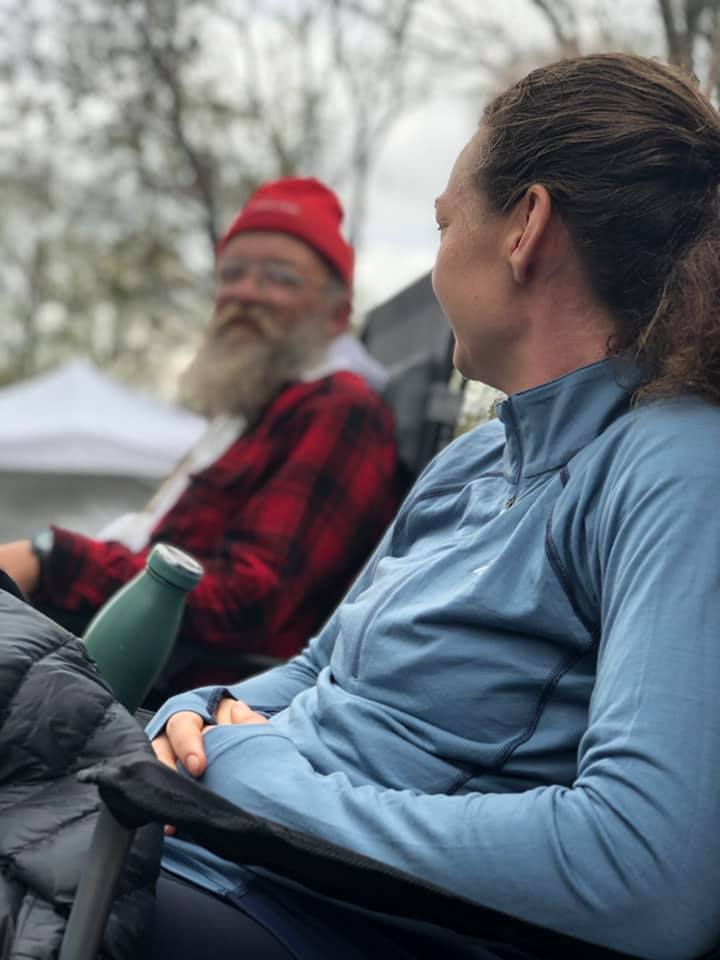 A year ago my Facebook feed was blowing up with this story of Courtney Dauwalter and Johan Steene battling it out on Laz Lake's backyard at 4.167 miles an hour. 15 minute miles. That number caught my attention, that’s my speed. The year before I had discovered the world of trail and ultrarunning by fastpacking around the coastline of Wales. I’d set my daily distance goal by using the theory that I could average 4 miles an hour for days. As long as I didn’t pause my watch, and I kept my average pace to the golden 15 miles an hour I’d make it.

It felt almost as though Laz had created this race for me. I’m not a fast runner, and really have no inclination (or natural gift!) to be. But I will plod for days.

So in May I turned up to New Zealand’s inaugural backyard race filled with nerves that I might actually do this thing. I really had no hard evidence that I could outrun these experienced endurance athletes just a 'crazy' belief that I would. 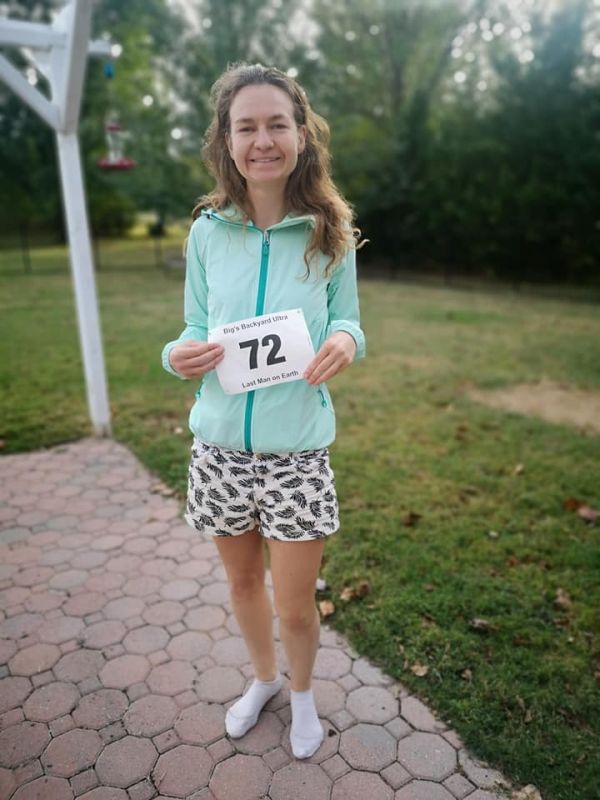 My crazy dream turned out not to be so crazy after all. So on October 19th I found myself standing in a backyard in America on a start line surrounded by people that I had been watching on screens for years. Perhaps even more surprisingly I’d managed to convince myself that this was something I could win.

To win at you have to believe you can. You have to be singularly focused on sticking it out to the end. So when you don’t it’s pretty gutting.

Day one went well, I was surprised by quite how technical the course was and adjusted my plan of sticking to 52 minutes to a slower 54-5 minutes to cope with the increased technicality. It really is single track and the 73 of us ran in conga lines for laps and laps as we each refused to cave into the pain that was already starting to sneak in. I found myself a comfortable group and ended up running just behind 6 of the other women in the race. I remember feeling particularly daunted by these girls who all looked in peak physical form and were laughing and chatting easily. It took a few laps before I plucked up the courage to go and say hi. Turns out they are all pretty cool.

By lap 8 things finally thinned out a bit and I had my first free run at the downhills that I enjoy so much, I let loose on the trail letting my feet find the rocks and free hands find the trees to help me down. Perhaps a bad idea to let myself go, the next few laps were tough. The final lap in semi-darkness I took my first tumble tripping over the exact root I had spent several minutes thinking about in an effort to avoid. I'd had some muscle niggles but nothing a bit of massage and stretching didn’t fix. I was feeling nauseas at times but again a bit of ginger seemed to keep that at bay. I was just about keeping up with 300 kcal an hour albeit mainly with Spring and Tailwind. 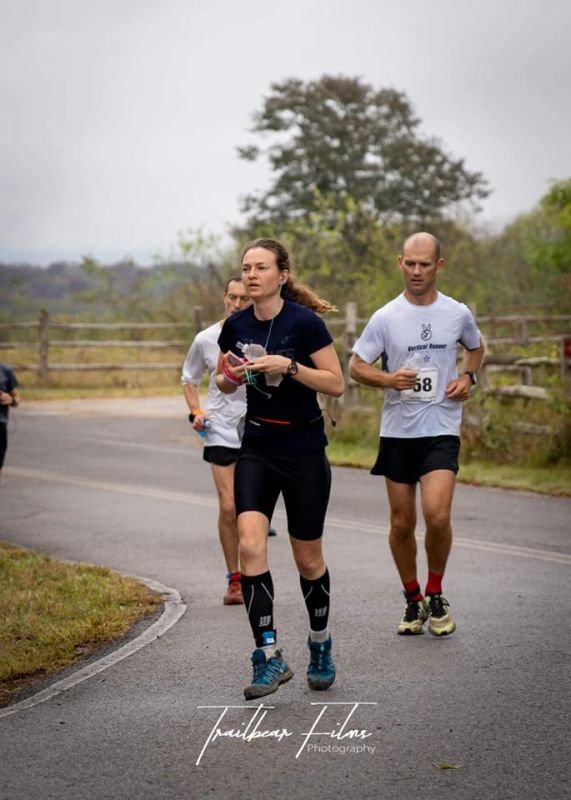 The first switch onto the road and the bouncy feel of getting into my road shoes was joyful. Trying to keep a balance of not going out too fast but having enough time to sleep and sort out kit. A 50 minute lap seemed to work. I’d power walk the slight inclines and run the rest, with a good walk at the end to cool down into the off time.

I avoided caffeine overnight in preference for sleep and in the first 24 hours this was great, I had several proper sleeps overnight and remember feeling refreshed when I woke.

The pattern coming towards the end of the night, a caffeine shot with one lap to go to wake me up for the morning and a change of clothes to feel refreshed.

The second day was hot. I hate the heat. Even with a hat full of ice I felt like I was on fire for most of the day. Our last two laps were slow and I had to really push the down hills to get back in a my self imposed time but that made me smile so not all bad!

Arriving back for change over to the road I had a suspicion my period had started, headed straight to the portaloos and yep. I use a moon cup and usually my period just really isn’t an issue, a bit of an annoyance yes but I put the moon cup in and only have to change it every 12 hours or so. But I’d lost it somewhere between the air b&b and the race. Again this shouldn’t have been an issue because I had a spare. Turns out I should have trialed the spare, it was a different brand and I just couldn’t get it to sit right. So I spent what felt like all my rest time over the next three laps trying to sort it with Emma frantically working behind the scenes to source some tampons as an alternative. At a similar time I started to develop a few hot spots and had to spend a lap rest popping a few blisters and re bandaging my feet. These issues really took their tole on sleep time meaning I only got one or two sleeps in over the night laps. While all this was going on I started to feel a niggle in my hip. I attempted to stretch it out during the walks but just couldn’t get my glutes to activate on the left. I’m not sure there were more issues to deal with than the night prior, but with sleep deprivation and exhaustion I just wasn’t able to let go of the problems I could do nothing about, and didn't give time to the hip that I potentially could. I wasn’t sleeping during rests and 3 or 4 times during the last laps I woke up still running but having drifted into the ditches at the side of the road. Things were beginning to fall apart. 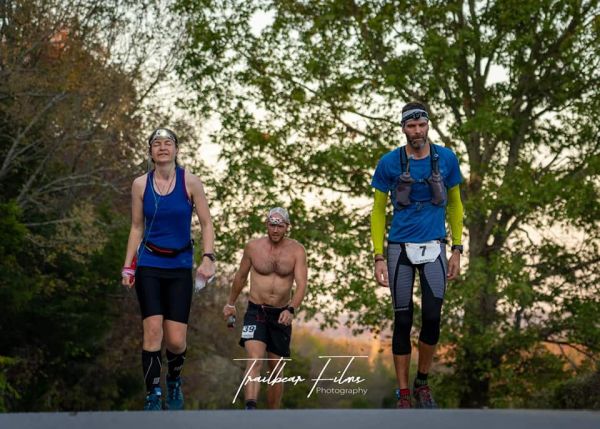 Switching back onto the trail for a third time I was daunted. It had already felt tough to make times on the second day. What was it going to be like now? It was slippy on the ground. I was tired. I took a fall on flatish terrain. Then after throwing myself down the last main decent I ended up headbanging the bushes to come to a stop. No damage sustained I got back up. During the lap I noticed my throat was increasingly dry, swollen and sore. I had no idea what was going on but trialed some salbutalmol and an antihistamine at the end of the lap. It turns out that I had been sipping on sugar for so long without rinsing my mouth out that a yeast infection had taken hold and was starting to make itself known. Ultrarunning is glamorous I know.

Getting back up for the whistle at lap 50 I didn’t feel different. I didn’t feel worse. But as I took my first strides out my legs just went from me. I hobbled around the corner and down the familiar road, limping back up. I checked the clock. 7 minutes. Only a minute slower. I pushed on and managed to find something resembling a normal gait. I pushed on. Slowly up the hill, along the flat, up the hill, then tried to pace it down. I was back to limping. 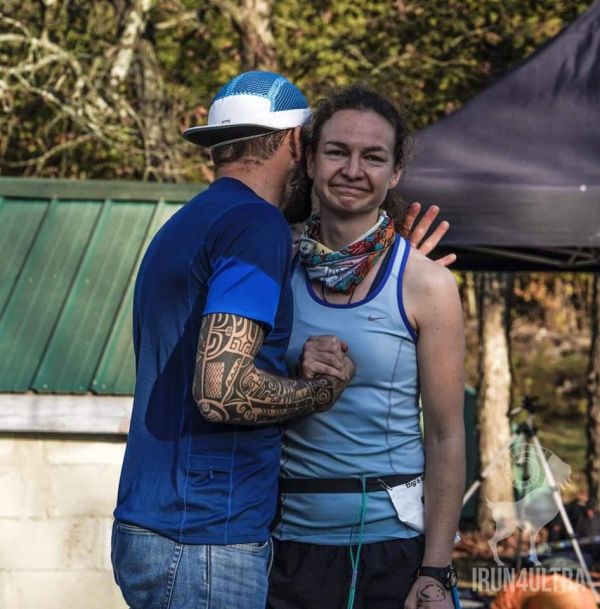 At Big’s you don’t need a GPS watch to guide your speed, instead I had mental markers around the course of trees, rocks and turns labelled with the minute I should arrive. I got to my ’53 minute tree’. It was nearly at the hour. I was seven minutes behind schedule and I couldn't run downhill. I wasn’t ready to go home. But I also knew that my race was over. I battled with myself that it was worth walking the course in it’s entirely. Tiredness won out. I caved. I turned around and began the slow walk home. It’s a funny thing how that mental surrender effects the body. Stones that I had minutes ago been attempting to run over I was now struggling to descend needing to find hand-holds to help me down. This was no longer just a hip issue, to be honest I couldn’t even feel an issue there anymore and a part of me will always wonder if this niggling pain was just my brains ticket out of a world of generalised pain!

I got to the house minutes from the end of the loop. I still wasn’t ready to be back. I looked at my watch, another 15 minutes and the team would be coming past. It seemed like a good enough reason to stay, say goodbye and congratulations. And to tell Maggie that she’d better go and win this thing!

And so my yard came to an end. Gutting. But equally incredible. If you’d told me a year ago after that first painful 100km I would, in a years time run 200 miles in less than 48 hours there is no way I would of believed you.

Thanks to my Whanau (especially mama Wright who had a baptism of fire into the world of ultra) of runners, medics and friends for your support to get here and live this unbelievable dream.

I am certain that this is just the start