Day 4
Rest day! Long Day actually straddles two days to give everyone the chance to finish. This means day 4 becomes a rest day. The sooner one finishes Long Day the longer the rest.

I had packed quite a lot of food for day 4. A hearty cooked breakfast (dehydrated style), creamy carbonara for lunch, noodles for afternoon tea, and roast chicken for dinner with three fruits cheesecake for desert. A veritable feast day!

Camp was in a beautiful setting with shady trees and a gentle river flowing by. Many of us took advantage of the river to wash all our clothes and get them dry in the warm sun. Some people went for a swim and lazed in the shallows. Every now and then a finisher would arrive and those of us who were more mobile would rush over and cheer them in. Long Day was certainly a long day for some. Kudos to them for being out there so long. 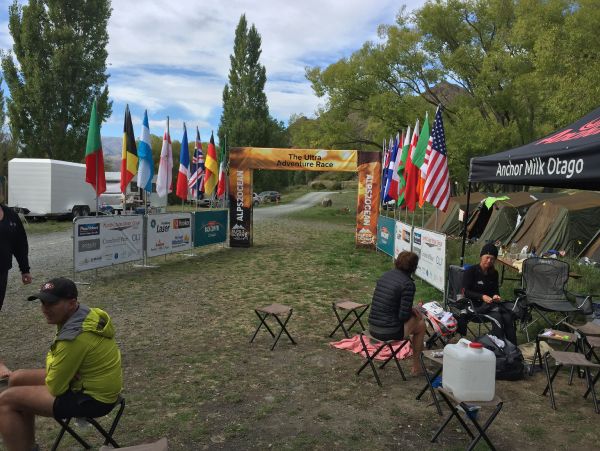 Rest day gives everyone an opportunity to recover a little and try to deal with damaged feet and painful legs. The list for seeing the physio was quite long! I managed an afternoon snooze in my tent with my feet elevated on a stool. Very relaxing!

Camp resembled the aftermath of a damaging cyclone, with khaki tents and gear hanging out to dry

I could have happily stayed in this camp for a few weeks to be honest. It was so lovely and nice to be away from everyday concerns and stresses.

Too soon the day became evening and thoughts turned to day 5 and what this would bring. I sorted out my gear and finished the last of the day's food before turning in for the night.

I woke to another perfect running day. Sleep wasn’t that great due to having to get up to pee twice in the night. I suspect I had some odema from the previous days that decided to make its way out.

Day 5 is a “short” day, if just over a marathon can be called short. The course profile suggested a few good hills but also some flat running. The race manual indicated that the flat part would be mainly on tarmac. This was necessary to get us between the “good bits”.

We all started at the same time rather than sending off the fast runners later. I started conservatively with the intention to take the first two hills slowly and then see what I could do on the flat part.

The distance to checkpoint 1 was only 3.1km but the reason was soon obvious - we had to climb a pretty massive hill past the Benmore Dam to the summit, where the checkpoint was situated, before heading back to actually cross the dam. The climb up was nice because it was through a pine forest but was, indeed, as steep as the profile showed. The views from the top were well worth it, though. We dropped down some nice single track and crossed the Benmore Dam. We then followed a sealed road down to river level and began the road section. I was expecting another big hill as shown in the profile but if I had been listening during briefing I would have realised it was to be bypassed. My idea of speeding up was delayed until I asked someone where the second hill was. As it was, I started to get a slight discomfort in my right hip area that wasn’t very happy with the road. I did start to catch and overtake some people but pulled back a bit to preserve the old body.

The third checkpoint was situated at the end of the road section. From here we headed up Deep Stream along a narrow and rocky path. This section is really beautiful with a lake at the beginning and then a braided river further up. About here I joined up with local runner Wendy and we would stick together for the next couple of hours. Alongside the river we could see where flood waters from the previous week’s cyclone had flattened the foliage to quite a high level - way above the track we were following. On this day the river was clear and happily within its normal banks. We had three crossings to make on the river but the water was deliciously cool and refreshing. The current was quite strong on the first crossing and I was thankful to have Wendy with me to link arms for stability. The next two crossings were easier and I had a bonus of spotting two large rainbow trout swimming away from us.

We moved away from the river and started heading over rough farmland. The time passed quickly, helped by conversation with Wendy. As we were heading up a farm track we saw a runner lying by the side of the track. Kerryn, who was leading the women’s race, was in some obvious pain and thought she had ruptured her achilles jumping across the river earlier. We made sure she had water and advised her to try and keep out of the sun. We promised to tell the next aid station and get someone back to help her. We made a note of the location and continued on. After about half an hour we were lucky to come across Linton who was checking some course markings in a 4X4 and, fortuitously, had the physio with him. We briefed him on Kerryn and where she was and they immediately set off. Luckily there was a farm track all the way to Kerryn’s location. It might have been a different story in a more remote and hilly part of the course.

Good deed done, Wendy and I set off towards the next checkpoint. We heard later that Kerryn had decided to make some forward progress and had crawled all the way to the top of the next hill! Linton found her making her way on hands and legs quite cheerily. The physio checked her leg and determined it wasn’t a rupture. Linton told Kerryn to hop in the car and they would get her to camp. Kerryn was having none of that and, because she wasn’t putting anyone at risk and continuing wouldn’t cause a permanent injury, she declared she would stay in the race even if she had to hobble on poles. So that is what she did! That’s one determined and tough customer right there.

Checkpoint 4 was situated at the edge of a large paddock populated by some beef cattle. Most were away at the back of the field but a few were friskily charging around and ducking between runners ahead. I bravely let Wendy lead from here until we had cleared the far side. I’m sure they could smell my fear!

The next part featured a good sized climb. The day had heated up somewhat but I was feeling pretty good. Just then Inia came charging past so I thought I’d latch on to him and get the hill done with. I got into a good groove and felt strong up the goat track and pulled away a little. This hill was like the others - false summits and unexpected gullies to negotiate. One had a small stream which I used to soak my hat and buff.

The guide book warned of a steep slope on the other side (surprise, surprise) but it wasn’t too bad due to being nice and dry. Much later on there was a little drizzle and I imagine the best method down would have been on one’s bum.

I finally hit the bottom and could see the finish gantry in the distance by the river but no tents. On finishing I could see a small boat waiting and was told that was the way across and would leave once three people were ready. Sue was already at the finish and Inia came in shortly after me. We donned life jackets and hopped in and had the most amazing and crazy jet boat ride down the river to the campsite. I’m pretty sure the Shotover Jet wouldn’t have gone down some of the crazy narrow channels that we did. After one of them Inia, who was in the front seat, was decorated with branches from the willows! At the boat ramp we hopped in the tray of a ute and were driven to the tents. What a way to finish the day!

After a wee sit down I made my way to the side of the river to wash. Every now and then a jet boat filled with screaming runners sped past. I had finished my wash and had just started walking back to camp when another jet boat came shooting towards the shore and, at the last moment, turned aside and thoroughly soaked everyone who was still by the water! Lots of laughs, for the driver anyway!

I did the usual evening preparations and waited for others to come in. There were quite a few broken individuals, in body and in mind. The days were taking their toll. Tent mate Ange was still out there and it was starting to rain a little. I imagined it wasn’t a lot of fun but knew she would be pushing through anyway. I hung around the medical tent and listened to stories from the day and saw some pretty beaten up feet. I don’t know how some people endured what they did but I witnessed some true human grit over the 7 days - something you just don’t see in day to day life. Maybe it’s just ultra runners or maybe it’s in every person - the ability to keep going beyond what you even think or believe is possible.

Ange came in half an hour before I estimated which was a nice surprise but her feet were killing her. I helped her get sorted in our tent and got her to the medical tent queue. The nurse redressed her feet and the doc issued some antibiotics. He mentioned that the conditions we were living in and open foot wounds were a classic recipe for infection.

Time to hit the sack and get ready for another day. One more big one was ahead before the final “sprint” home.