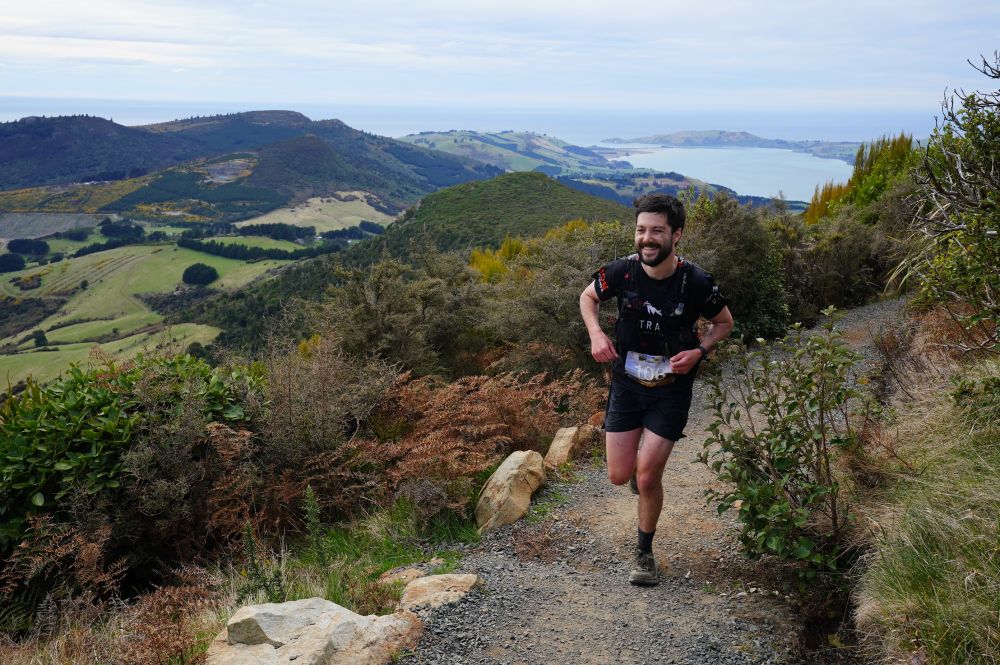 You might be forgiven for assuming that a large group of people hanging around a quiet North Dunedin street in the early hours of the morning are up to no good - and perhaps you’d be somewhat right. The energy at the start line is always electric, and the start line for the inaugural Three Peaks + 1 trail ultra was no different. However, this start line was on Woodhaugh Street, a quiet suburban street nestled at the edge of the Leith Valley, so there was no hooting nor hollering to be heard as the 85 or so runners embarked on their 52km epic journey. Locals are no doubt accustomed to this annual event starting on their street, as it has been going for over 30 years - however this is the first time competitors have started at 6am, giving them the better part of the day to race on some of the most beautiful and challenging trails Dunedin has to offer.

This new course doubled the distance of the original and formidable 26km Three Peaks, and by all accounts pulls no punches - even the race directors warned those eyeing this up as their first ultra mountain run to perhaps reconsider. And despite the relatively short ultra distance of 52km (especially for those seasoned vets who eat 100 milers for breakfast) this course was punishing. The 2500m+ of ups were up, the downs were down, the trails were demanding, and the pristine, panoramic forest views like a temptress, inviting “just a quick look” which could easily bring the catastrophe of tripping and tumbling head first into rocks and roots.

In many runs I have suffered from the foolishness of starting too quickly, so this time I promised myself that I would pace myself sensibly. I took it easy up Flagstaff, the first of 4 big climbs. Any local will tell you how brutal this climb is. It’s unassuming, and can lull you into a false sense of security. There is no question that it strictly punishes anybody who takes off above their threshold. I was happy to reach the top, feeling fresh,and enjoying the daybreak in cool, still conditions. 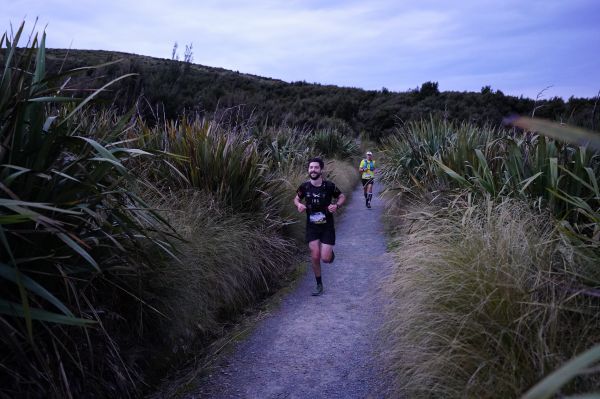 Downhill running is my joy - the adrenaline of ankle breaking speed, the freedom of letting go and letting gravity bring you down to Earth again. I started flying down Flagstaff and ran straight through the first aid station at the Bullring car park. It was great to see my principal and colleague both there - friendly faces are priceless in races! With their encouragement I marched on without stopping for refreshments. I had planned not to stop here, as I knew this was a crucial moment in the race. Up ahead was Longridge Rd, a 7km quad-busting descent if travelled too quickly. I knew this was not the section to make ground, but also not the place to slow down. In moments like these, instinct kicks in, and running by feel outperforms any worries about pace, heart rate, or splits. I knew the climb ahead of me would require a fresh and energetic attack, and trusted my animal nature to get me there in fighting shape.

After seeing some more friendly faces at the next aid station - I turned onto Tunnel Track, a fun, technical single trail, one of the many which form a network of trails in the Silverstream area. So far, so good. I refuelled, refilled my water, and before long saw the signpost to Powder Ridge. Having gone on two orientation runs, I had discovered that this climb was perhaps the most important part of the race. One section is very steep, climbing over 200m vertical within less than a kilometre of travelled distance. It feels like a crawl, and it’s crucial not to empty the tank here, or let it negatively impact your mood - there is still a lot of race to go. I was very happy with my steady approach to the climb, and at the top was met by Aaron who had camped overnight. He had beers and was eating bacon sandwiches. Talk about a tease! After a short chat I continued on and started climbing Long Ridge - the second, more steady half of the climb heading up to Pulpit Rock. It was after 10 minutes or so that I could hear a cowbell ringing up ahead.

There’s nothing like a cowbell to get you amped up. Whether it’s “Where is that guy?! I’m going to strangle him!” or “Wahooo I’m on top of the world!” - the cowbell never fails to elicit a primal response from runners. I love cowbells, and it’s ringing carried me up to Pulpit Rock, where I found Chris, a fellow runner who was looking quite proud of himself for making such a racket and disturbing the peace. He had even stayed the night just to make sure that the pack leaders didn’t miss out on the glorious noise. Now that’s dedication.

The ridge running from Pulpit Rock to Hightop is world class. The epic views of the pristine Silver Peaks and the ocean view in the distance speak to the wild part of your soul, urging you to return again someday. The Silver Peaks are as close to a spiritual home I have. I was feeling good and decided this was the time to start pushing my pace. I had fuel in the tank so it was time to take it up a gear. I started to cramp up, however I thought I had been hydrating adequately. I think my sustained effort was putting my legs into overdrive after attacking such a demanding climb. However this was race day, and what is race day if not a day to push your limits, roll the bones, and see what you can do?

My wife and friends were at the High Top aid station, rocking an 80’s theme. It was great to see them all, they were in high spirits which was just what I needed to get to Swampy. The Swampy Ridge climb is a sapping, muddy climb which is just enough to begin testing you patience. After a steady climb I was on top of Swampy. Swampy is almost like an elevated plateau - it doesn’t ‘peak’ like the other climbs in the race. So for the next 5km or so it was rolling, undulating hard pack. Basically, it was the perfect place for a rest - to walk, and boy did I want to. But this is where ultras get interesting. You tell yourself all the reasons you deserve to walk for a bit, all the reasons why you should take it easy, save some for the last climb. In all fairness, often this voice saves you from blowing up or hitting the wall. However I asked myself the question… What if I just keep going, through the pain? I felt I had paced the first half well… what would that be worth if I didn’t start leaving everything on the field now?

I started to run hard. Coming down Morrisons Burn into Leith Valley was muddy as hell - Swampy never fails to live up to its name. I had merged with the 26km runners by now, and the lead pack passed me. I was sliding all over the place, passing some Three Peaks runners, and my quads were screaming by the time I arrived on Leith Valley Road. Then it was another steady climb. “Come on man, just walk, you deserve it!” said the devil on my shoulder. But I knew I had to leave everything out here. I had shown my hand and now it was time to play it, get to Mt Cargill and attack it with everything I had left!

It was only now, climbing Mt Cargill that I wished I had poles. It was unrelenting, but nearing the last 200m of vertical climbing I remembered my secret weapon: A can of V in my pack. Delicious. This boosted me up to the transmitter. Running now on nothing but caffeine and adrenaline, I sped down to Bethunes Gully in record pace, setting a new PB well under 18 minutes.

As I exited the Gully and ran down the street in Normanby another runner was now with me. “I reckon we can get 6:15” he said to me… “Let’s do it” and we upped the pace.

I was spent. I had left everything out there, and this runner pulled away from me as we entered Chingford Park. I crossed the line in 6hrs and 14mins, well under my goal of sub 7. This race taught me to be patient, to run on instinct, and that timing your fuelling and hydration can make or break a race performance. Everything just clicked. Most of the time, it doesn’t. That’s what made this race so special. I was welcomed by Mark and Steve, the race directors, who gave me a beer and a medal. I laid down and closed my eyes, absolutely shattered. My family were there, and for the next hour and a half we watched people come in, cheered them on, and talked with others who had finished their race.

Three Peaks offers something for everyone. From the 11km Race the Summit, the 26km Three Peaks Classic, to the now extended 55km Three Peaks Plus One, this event has the grass roots community that welcomes you with open arms and makes you want to keep coming back. The energy of the start line is always electric because you know everyone has worked hard to get there. They have backed themselves. And maybe someone’s fighting for the podium. Maybe someone’s set a personal challenge to tackle a new distance or finish under a certain time. Maybe someone’s raising money or awareness for a cause beyond themselves. Maybe someone’s just out for a damn good adventure amongst great company. Everyone has their own reasons, motives, aspirations, and goals, and take these with them into the mountains. What they come back with is between them and the mountains. And it’s this experience that forms the foundation of long distance trail running, and which brings people together to celebrate our human struggle to overcome together.