“Do you fancy having a look at a new running pack?” asked the new supremo of the Wild Things empire. “Let me know what you think. Maybe write a few words. Maybe keep the pack if you like it.”

So, there’s the first disclaimer: while no cash was involved, there was a clear WIIFM in this assignment. Though that also comes with its own disclaimer in that I sought and obtained full editorial control: this would not be a gushing promo piece, if I didn’t like something I would say so. OK, we understood each other.

Now to the second disclaimer: I had owned and used precisely two running packs before trying the Amp Ultra, and neither were of the brand names that experienced ultra runners seem to wet themselves over all across cyberspace. In short, I was, and still am, fairly new to this long-distance malarkey and all of the toys and tools that go with it.

Nevertheless, I took delivery of the Amp Ultra keen to see what was in store for me.

The vest is made of DWR treated UTS nylon which meant very little to me, though its claim to increase strength and water resistance sounds legit. I have used the pack on several three-hour plus adventures, the majority in the snag-happy bush of the Kaimais and the Coromandel forest, and other than some decent dirt marks the pack looks barely touched. It hasn’t yet been tested in a solid downpour, but soft, summer rain just bounced off the top.

The main pocket is generous and holds all of my personal ‘compulsory gear’: jacket, merino, PLB, map and compass, first aid kit, and so on. Behind that, a separate sleeve for a bladder (not supplied) provides a decent barrier between sweaty shirt on the back and clean gear in the bag. Compared to some bags, though, the bladder sits snugly against the back meaning that the contents warmed noticeably on a couple of my longer days.

A smaller zipped external pocket is ideal for those important things that you’re only going to need to get to when you take the pack off: car keys, $20 note, toilet paper, and so on. There is also an exterior mesh pocket that runs across the back of the pack area which I have not yet had cause to use but if you were loading up to the max would easily take a rain jacket. 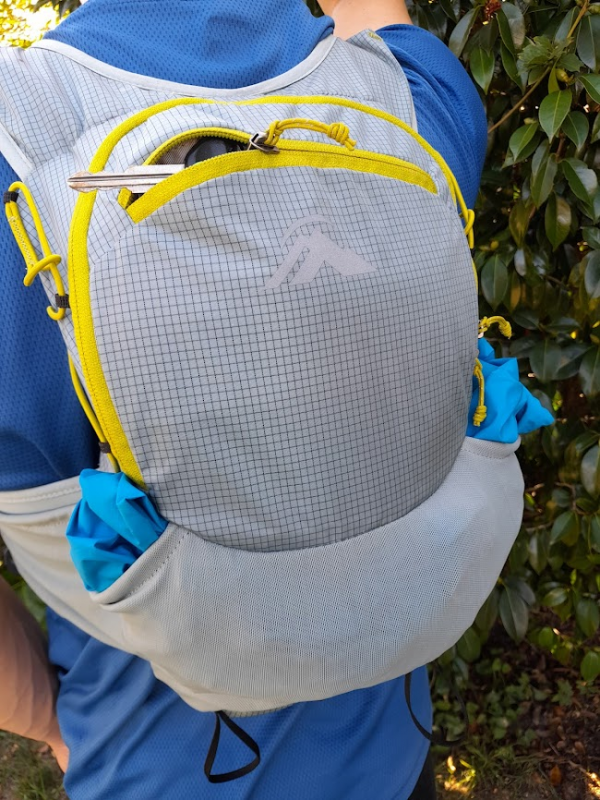 The front of the vest is where the advantages kicked in for this user. The open chest pockets are very generous – I don’t think I could eat all the gels and snackerels that they could hold – and are complemented by two zipped side pockets and another couple of open mesh pockets. In short, lots of options. For each longer run, I always had more pockets than stuff and had to resist the temptation to take more just because I could. 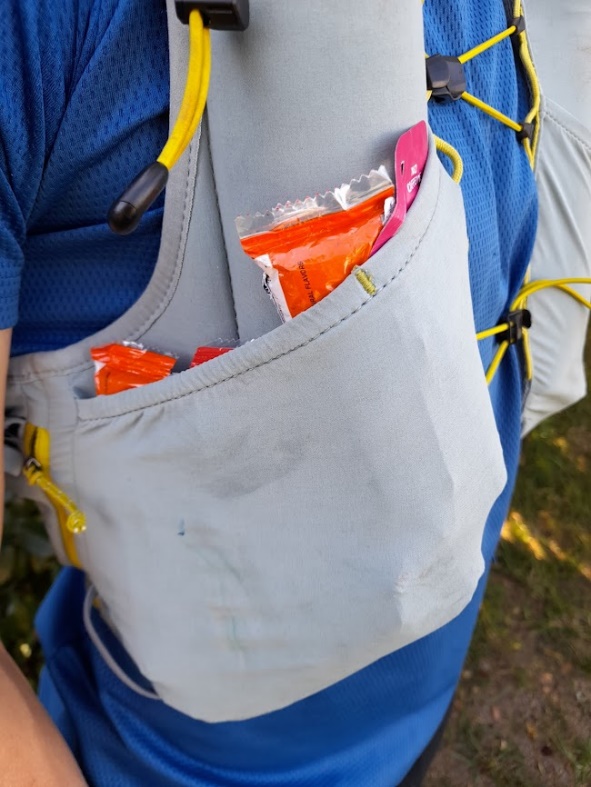 Note that the chest pockets are deep enough to take a packet of bloks without poking out the top but that wouldn’t have made for such a scale-illustrating picture.

Personally I found the open pockets both easy to use and secure (the elastic at the top being just the right tension to allow hands in but not allow contents to spill out inadvertently). However, I imagine that a particularly springy runner may worry that important stuff could bounce out of the pockets, particularly if they were over-stuffed (the pockets I mean, though it could apply to the runner as well).

And I wasn’t overly sure where my phone ‘ought’ to go. The most convenient place was one of the large open pockets (with the nutrition) while the only close-to-hand zipped pocket was the side one which was barely big enough for my standard size phone and slightly more awkward to access in a hurry. I swapped between the two and settled on the large, open chest pocket though would switch to the slightly less convenient zipped pocket for river crossings or downhill scrambles or anywhere I thought I risked tipping myself upside down. Phone pocket (one each side) with open mesh pocket stitched outside it.

The front-fastening system involves plastic hooks attaching to the aforementioned yellow piping and is both simple and surprisingly secure. On my previous pack the fastenings required frequent on-the-go tightening, so much so that it almost became a nervous tic – the running equivalent of a fidgety batsman (think Aussie Steve Smith) running through his pre-delivery preparations. Not so for the Amp Ultra; once on and tightened there was hardly any slippage as the hours went past. Initially, this was disconcerting (my nervous tics were clearly reassuring) but once I was used to it, I found it lovely to just ‘forget’ the vest and get on with the running. 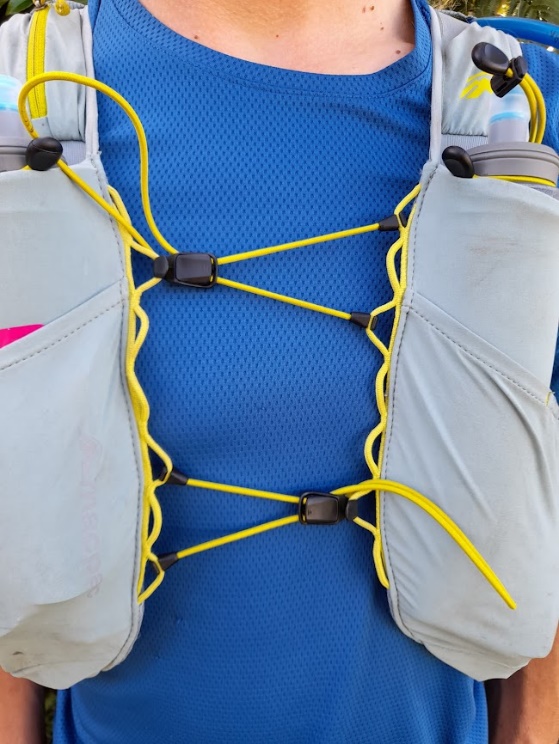 The vest also included two pockets for the supplied 500ml soft bottles. These were a very snug fit when the bottles were full (as you would hope) which meant that the best way to drink (and the way suggested on the promotional video) was to duck my head down and suck from the bottle in situ. This didn’t suit me. My natural balance and proprioception (or lack of) means that running, head ducked down, on variable ground is a recipe for an almighty face plant. Thus, drinking required a stop to walking pace which was very welcome at times and far from ideal at others. The solution is, of course, to invest in long-straw tops to the soft bottles rather than the standard short sipper tops (though I do like the mouth-feel of the Macpac sipper tops – good flow and reassuringly leak-proof at the same time).

Balance-wise, the vest needs the soft bottles to be at least partially full to counter the weight of the bulk I carry in the back pocket. The one time that I relied primarily on the bladder for hydration the vest did slide back a little and I lost the ideal centre of gravity. On every other run when the soft bottles provided a bit of extra weight on the front, the pack sat really comfortably on my back and only very rarely did I feel the need to adjust its weight on my shoulders (and I should also note that the shoulder straps are wide and very comfortable).

What else? Well the designers have ticked the health and safety box by including a whistle cleverly hidden in a small open pocket on the chest strap. Big ups for that thought. Unfortunately, the whistle itself looks like something found in the cheapest of Kmart’s Christmas crackers. I will continue to carry my trusty metal one for a bit longer I think.

On the opposite chest strap there is an equally small zipped pocket which I found very useful for rarely used but need-to-be-handy things like Panadol and antihistamine tablets, or a small tube of sunscreen or lip balm.

I also liked that the channelling for the bladder tube was ambidextrous. My previous pack was designed for a left-shoulder feed only which suited me fine, but the Amp Ultra can go left shoulder or right shoulder and therefore will suit everyone equally.

Small gripes? There is no ‘carrying handle’ in the neck area. I appreciate this may be one less piece of material to create a rub-risk but I like to be able to pick up the vest (particularly when heavily loaded pre-race) without yanking on one of the arm holes. A central hang point allows a more balanced way to carry it around (without actually wearing it of course).

And as far as I can tell, none of the various yellow ties and loops is specifically designed to hold the drinking end of the bladder tube. I had to co-opt what the promo video describes as a ‘pole securing loop’ for this purpose. It worked OK but never felt totally right. It’s not a biggie but I wonder why it was missed from the design.

So, overall impression? I like it. A lot. It is comfortable, a very usable size, has a good array of decent-sized accessible pockets, feels robust, and is nicely balanced when full. It has become my favoured pack and I look forward to many more adventures together.

And what’s the damage? Well, the retail price of $280 is frankly eye-watering, particularly given that a bladder would be extra. But then, only a few people ever pay full price at Macpac. In return for your email address and vital statistics, your Macpac Club card takes 30% off to make it $196 (at the time of writing), and your Wild Things VIP membership takes another 10% off that. That makes it more than decent value for money. Recommended.